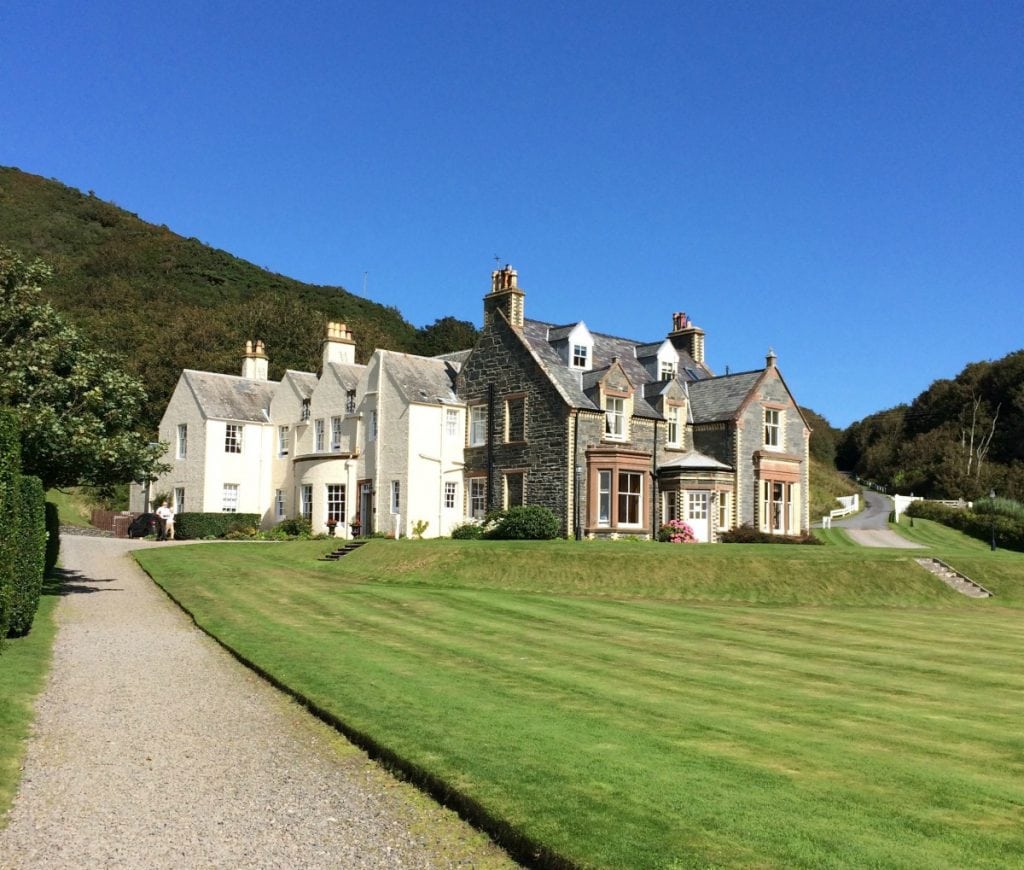 Out of all the hotels on the Luxury Galloway website, the one I was most curious about was Knockinaam Lodge. Built in 1869 as a hunting lodge, its secluded location, on the south-west tip of Scotland, marked it out as a secret hideaway. 30 acres of landscaped grounds, its own private beach and uninterrupted views over to Northern Ireland. This is a place oozing with history and intrigue: the lodge features in John Buchan’s 1915 novel, The Thirty-Nine Steps, and, during World War II, Knockinaam was the location for a secret meeting between Sir Winston Churchill and General Eisenhower plus their Chiefs of Staff.

As we drove down the single track road towards the hotel, at each turn I was waiting for Knockinaam to appear. On the final bend the beach came into view, and then the hotel itself, bathed in sunshine. Residents were sitting in the grounds sipping afternoon tea, beloved dogs snoozing at their feet. Others were drinking champagne near the summer house: a white, wooden building packed full of spare seat pads, racquets and beach toys.

The large croquet lawn was occupied by a small family of rabbits, happily oblivious to their slumbering neighbours. The beach was empty apart from one elderly lady sitting by the sea’s edge, hugging her knees as she looked towards the horizon. 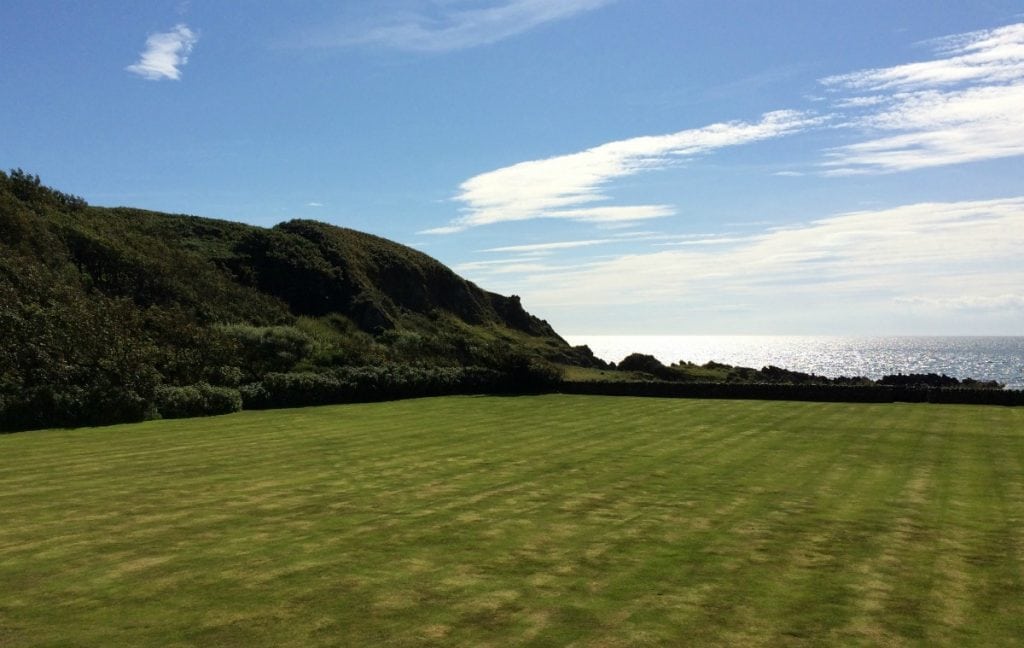 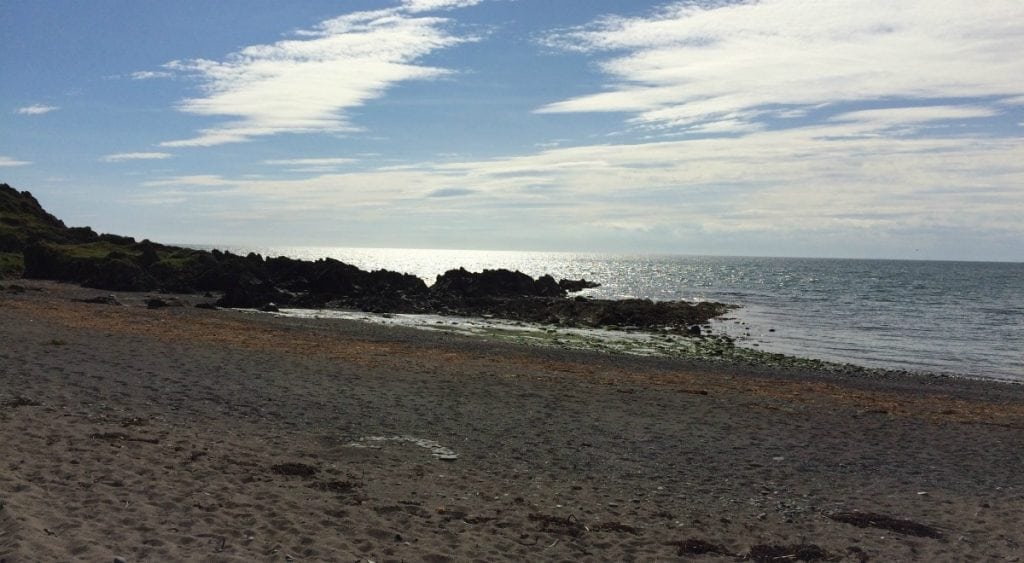 Dougie and I felt we had stepped into another world or driven through some sort of portal back to an age where the upper classes spent weekends at a friend’s country house, arriving with cases and hat boxes piled up in the back of their Bentleys.

Inside, Knockinaam is a glorious, if a little faded, beauty. With antique furnishings and a subdued colour scheme, it appears comfortable in its vintage style. But how could it be any other way?

We were given the key to our room so climbed the stairs, noting how polished everything was. I cast my eyes over the books in the glass-fronted dresser and noted some of the names on the other doors: Whin, South, Hannay. We had chosen to stay in the Churchill room. If we were going to immerse ourselves in the history of Knockinaam, why not do it in style. The room was large, though a little gloomy. I thought it just needed more light so switched on some lamps and stood face to face with the famous man’s portrait which hung above the tiled fireplace. I wasn’t sure I was awfully keen on him looking at me for the duration of the stay and contemplated turning him to face the wall. Dougie told me I was being ridiculous and just to ignore him. 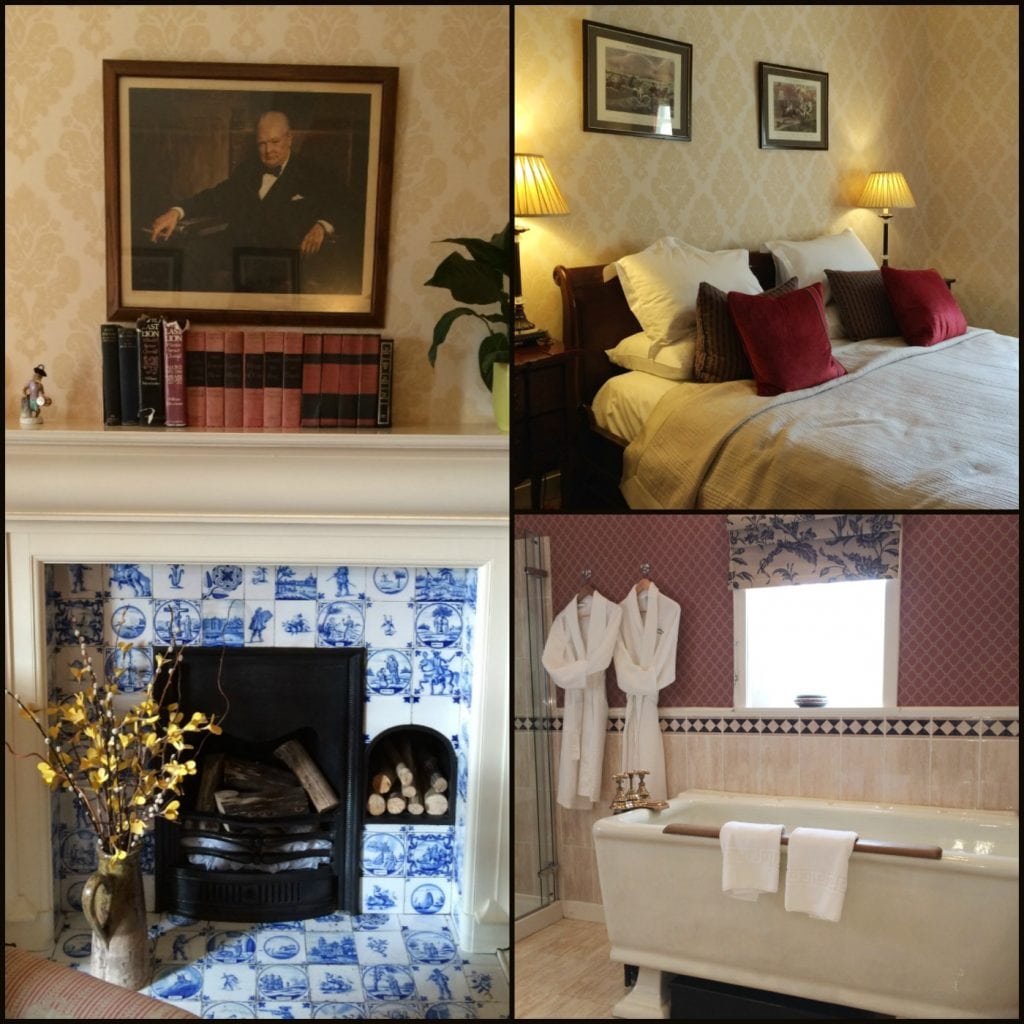 I decided to make use of the 100 year old enamelled bath which I was assured Churchill had wallowed in during his time at Knockinaam. It was huge, with two large copper taps which gushed piping hot water into the tub, taking some while to fill because of its capacious size. I suspect Winston’s frame occupied it rather better than I did: my feet couldn’t touch the end so I was in danger of slithering under the water if I lay back.

The staff at Knockinaam are a credit to the owners, David and Sian Ibbotson: some young, their cheerfulness making up for lack of experience; others a little older and wiser, very down-to-earth and warm. This lack of pretension was very welcome, considering the grandeur of the hotel itself.

At the bar, sitting under an array of mounted deer heads, Dougie perused the extensive whisky menu and chose one which was light enough as an aperitif. I felt compelled to swap from my usual G&T and try a dry sherry – it just felt right somehow. A great deal of people-watching ensued: it was like the cast of a murder mystery and I was sizing up potential perpetrators. 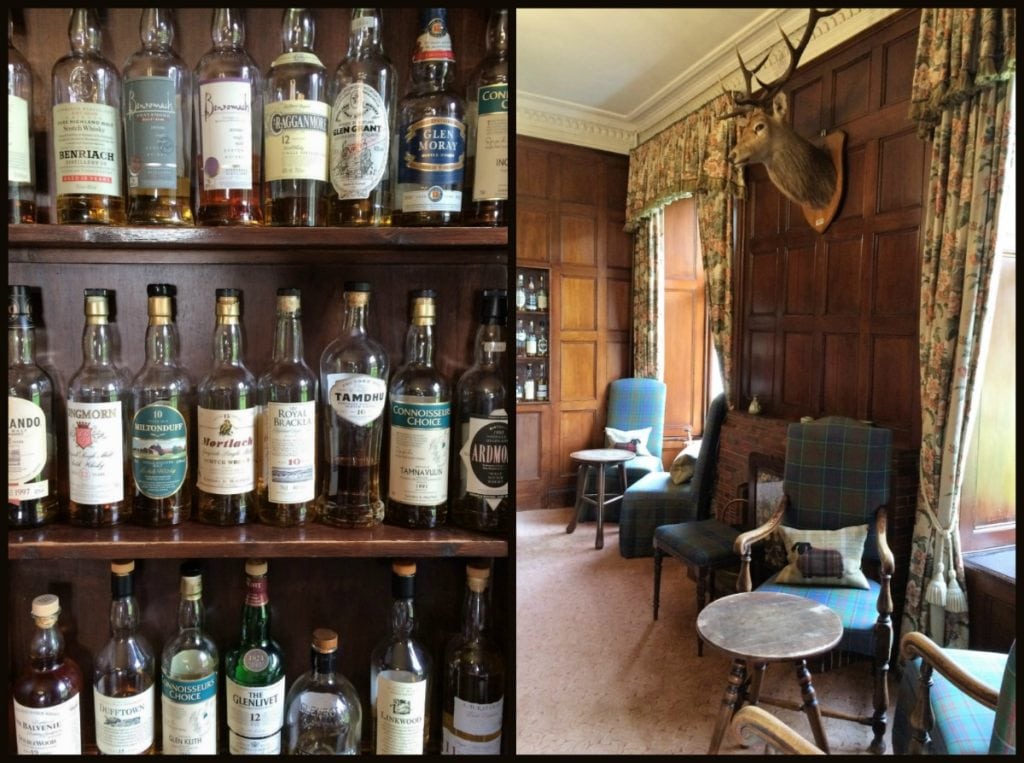 The owner brought us the menu and explained it was fixed but that they could provide alternatives if there was anything we didn’t like. We were more than happy with the proposed meal, knowing that award-winning chef, Tony Pierce, who has presided over many years of Knockinaam having a Michelin star, was responsible for our dinner that night.

There are no photos of the dinner. I didn’t feel it was the kind of place where Instagramming your food was appropriate though I’m sure no-one would have criticised me. You’ll have to just trust me when I say the meal was delicious: small, delicate portions served in an exquisite dining room with sparkling glasses and thoroughly-polished silverware. 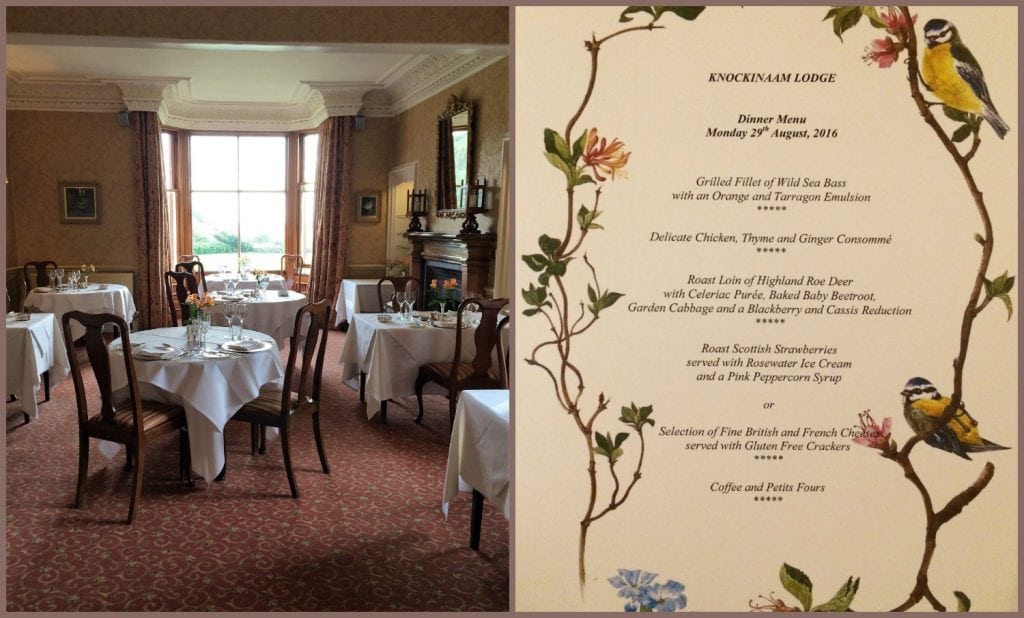 We had coffee and petits fours served to us in the drawing room. Easing ourselves back into the well-loved sofas we thumbed through a number of magazines and more books before taking the stairs back up to see Winston and falling asleep effortlessly in the supremely comfortable sleigh bed.

The custom in the hotel is to bring early morning coffee or tea to rooms rather than provide guests with a kettle. I’m not a fan of greeting strangers at the door whilst looking dishevelled so we turned down the offer of an early cuppa. We watched morning telly, I made use of the free WiFi (yes, even here!) and we were first down to breakfast, bagging the window seat with the fabulous views of the lawns and the beach.

As we set off later that morning to visit Culzean Castle further up the coast, I couldn’t contain my excitement knowing that, come 4 o’ clock, the whole wonderful ritual of staying at Knockinaam Lodge would begin all over again.