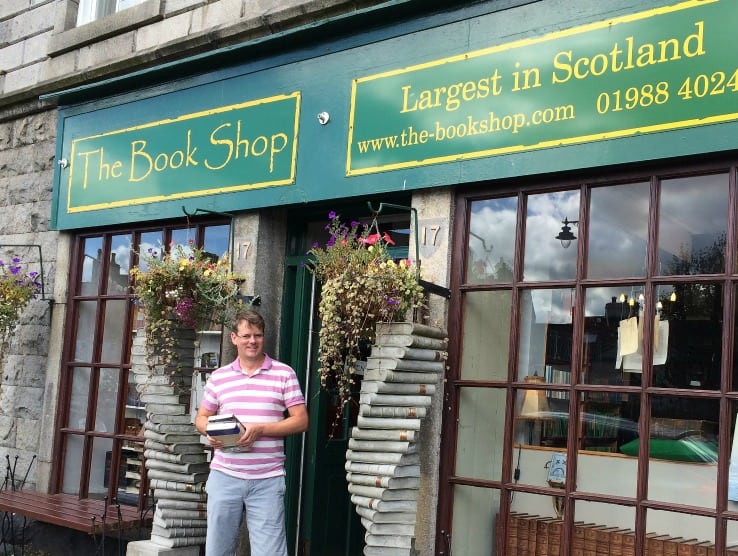 Book towns were established in 1961 by book dealer Richard Booth from Hay-on-Wye. Whilst this one is the biggie in the UK there is a smaller book town in the village of Sedbergh in the Yorkshire Dales. Scotland has Wigtown. Located in Dumfries and Galloway, this enchanting town, with 900 residents, is home to 12 independent book shops and its own literary festival. The festival this year is on from 23 September to 2 October so it’s on now. If you can just drop everything and go – then do it.

There are lectures, debates and events covering all genres from children’s fiction to poetry. Celebrity authors such as comedian Susan Calman and cook Prue Leith, share a jam-packed schedule in this festival which, as it’s sponsored by the Scottish Malt Whisky Society, is bound to be a very jolly affair.

We visited Wigtown on our road trip around the region. We might easily have missed it but thankfully I realised it was just a short detour on the road from the Balcary Bay Hotel to our next stop on the west coast, Knockinaam. It was a very quiet town. In fact, it was so quiet I half expected to see tumbleweed passing us on the main street. We parked on the road in the centre of the town and mooched about. The Town Hall (County Buildings) looked an impressive edifice so we wandered in, thinking we might see something interesting but, truth be told, looking for a loo. If you are ever in a town and can’t find any public conveniences, my tip is to find the local civic building or library and you’ll find smart, free facilities.

Dougie spotted a sign to say they had an Osprey Cam on the top floor so we climbed the stairs, still not seeing a soul, and found a lovely bright room with a screen showing nesting ospreys. Having been extinct in Scotland for many years, they have been successfully reintroduced and now Scotland has more pairs than any other part of the UK. This was a real treat to see these magnificent birds and to appreciate what has been done to protect them.

Back on the streets of Wigtown, we were a little pushed for time so opted to just visit one book shop before setting off again. Luckily one, with the inventive name, The Book Shop, caught our eye. It sold second-hand books and claimed to be the largest in Scotland. It was only once we were inside and started to explore its many rooms that we realised this was probably true. It was a book-lover’s dream: higgledy-piggledy,  full of silly signs, customers’ postcard quotes and a Kindle riddled with shot-gun pellets, seemingly put out of its misery by a local poacher. There was a bed, reached by a ladder where, if you can’t get comfy with a book unless you’re under the duvet, you can do just that.

There’s a wonderful true love story attached to The Book Shop. American Jessica Fox,  media consultant for NASA, had a recurring dream of being in a dusty bookshop in Scotland, dressed in a woolly jumper, aware of the smell of the sea. Not having any connection either to bookshops or Scotland, she searched on the internet and discovered Wigtown.  You can read the full story in this Guardian article but the gist of it is that she made enquires, came over for the festival and, eventually, fell in love with the owner of the shop. She is now that woman in her dream, sitting in a dusty bookshop, dressed in a woolly jumper, smelling the sea. 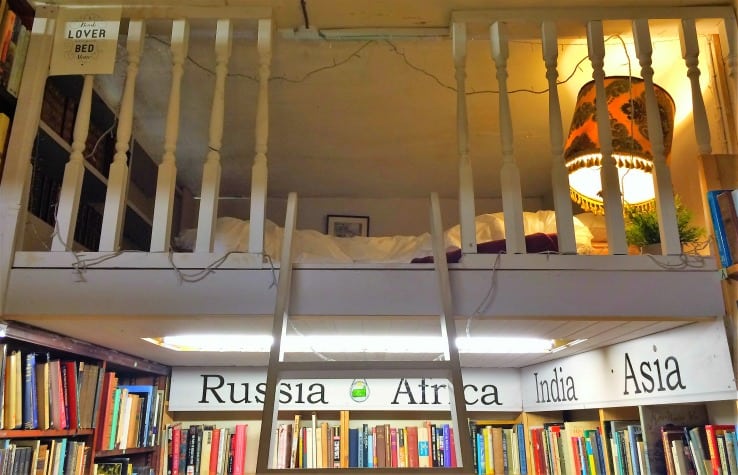 We spent ages in the Book Shop, losing ourselves in the shelves. Dougie found a number of books to take home with him. Despite being surrounded by old books, I bought a new one, McMillan’s Galloway, by local author and poet, Hugh McMillan. I thought it would give me a insight into Dumfries and Galloway and it proved to be a corker, full of stories about fairies, Robert Burns, and smugglers. With chapters such as “Anthony Hopkins’ Bench” and “Feisty Women” you realise his view is refreshingly irreverent but brimming with that unshakeable affection you can only have for your own part of the world.

It’s such a shame we didn’t time our trip for Wigtown’s Book Festival as I imagine the town is completely transformed. And yet, seeing it when we did, as it dozed happily for a few weeks before all the visitors descended, maybe we weren’t short-changed after all.