Home  >  Blog  >  Not another round of arthritic charades?

Loyal readers will know that arthritic charades appear in my Christmas blog post as regularly as night follows day or bad wind follows sprouts. You only need to type the game into the search box on the right to discover the delights of playing our unique version of this family favourite with the in-laws.  We call it ‘arthritic’ on account of the crooked fingers of my dear old father-in-law, George, which makes guessing the of number of words something of a challenge.

This year we were joined by my mother who had come down from Newcastle to stay with us for Christmas, so there was even more opportunity for some excellent blog fodder. Mum’s texting prowess was the first thing to cause hilarity as she realised what she had written in a message to her niece on Christmas Eve, telling her all about her day and the bad weather:

…It’s lovely to be here at Trish’s. Been having gin and tonic. Peed all day….

Even dear old Emily, Dougie’s mother, caused us to snort on Christmas Day whilst watching the Strictly Come Dancing Christmas Special:
“Sheila Hancock dances beautifully, doesn’t she? Wasn’t she married to that chap, Frost?”
“No, Emily, he was called Thaw!” 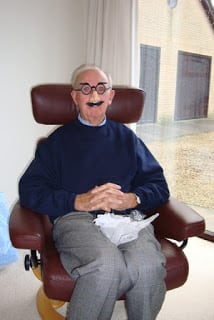 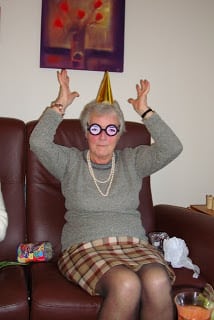 During pre-dinner drinks on Christmas Day, I brought in a mega-cracker to be pulled. All the usual rubbish was inside, including silly disguises for everyone. Emily looked very strange in her goggly-eyed glasses but George seemed to suit his Groucho Marx face, don’t you think? The cracker also contained some charade suggestions so this new batch of material avoided us using the old box where, it seems, we have been repeating the same book and TV titles for the last few years and still not working out what they are. Thank god we didn’t have to see George do The Naked Civil Servant for the third year running, as he has a habit of taking things too literally and stripping off.

This year, unfortunately, was no different. George had forgotten what syllables were, confusing them with letters, and yet again, insisted on finding props. He disappeared into another room for one charade, gathered up a Davy Crockett style hat (a present from us), a bag for table tennis bats (another present) and a thin log from the fireplace then proceeded to charge into the living room, brandishing the piece of wood and using the bag as a shield,  for his quite spectacular version of Gladiator. As we had given up on believing how many words or syllables were in each title (who knew that the word ‘desperate’ has one syllable), George found it easier to mime ‘the whole thing’ and it took some time before his charade of walking around with his head held high whilst simultaneously pretending to paint the walls, was found to be The Talented Mr Ripley. “Why were you painting?” I asked afterwards. “I’m talented,” was his reply. Fair enough.

But this year I think the prize for the best charade must go to my mum who started to mouth obscenities and pretend to throw things around like a demented Mrs Brown. We eventually worked out it was ‘Gordon Ramsey’. She had insisted it was a TV programme but we said the drawing next to the clue was a spotlight, indicating it was a celebrity’s name. “A spotlight?!” she queried, “I thought it was a ham shank.”