One of the four hotels we picked for our romantic road trip around Dumfries and Galloway was the Blackaddie House Hotel in Sanquhar. It’s owned by Ian and Jane McAndrew and if you love your food, you must give it a try as it’s absolutely sensational. Of course, that should be no surprise as Ian is currently Scotland’s Chef of the Year, having scooped this honour at the prestigious CIS Excellence Awards.

Ian is no stranger to accolades. Originally from Seaham in County Durham, he found himself drawn to cooking after taking a fancy to his domestic science teacher. After leaving school, he trained in a number of  top 5* hotels in London and Germany before becoming the youngest British chef to gain a Michelin star in 1981 as Executive Chef for Eastwell Manor in Kent. He followed this up in 1985 with another star for his own restaurant, Seventy Four, in Canterbury. In the 1990s he and his wife Jane moved to Norfolk where he concentrated on his own consultancy business. Jane tells me he once flew to the Netherlands with a case full of suet in order to teach Dutch chefs how to make dumplings. I imagine that was rather different from his previous experience, training chefs such as Andrew Fairlie and Paul Kitching who have gone onto attain their own Michelin stars at Gleneagles and 21212 in Edinburgh respectively.

In 2007 the McAndrews bought the Blackaddie Hotel on the River Nith in Dumfriesshire. Since then they have established a reputation for providing exquisite fine dining cuisine in a relaxed country pub environment. The Blackaddie could be described as a restaurant with rooms but it is far more than that, particularly since the refurbishment of the bedrooms. Seven beautiful rooms, plus two riverside self-catering cottages, make the Blackaddie not just a place to come for a meal. The food is, naturally, outstanding, and I promise I will come to that eventually – but just keep salivating a little longer until I’ve given you the lowdown on the accommodation.

We had booked the Partridge as it was a pet-free room (Blackaddie, like the other hotels we stayed in, is very doggy friendly). Ian, however, had upgraded us to the four-poster Grouse. I did worry it might have a canine whiff about it but it was spotless, hair-free and fragrant. It really was a fabulous room with a comfortable sofa, tea and coffee-making facilities and treats such as shortbread and Scottish tablet (a condensed milk, sugar and butter concoction designed to narrow your arteries by merely sniffing it). The bathroom wouldn’t have looked out of place in a central London chi-chi hotel: gorgeous grey slate with a corner Jacuzzi bath. I tried the bath before dinner and but didn’t fill it up enough so one rogue jet squirted water all over the bathroom instead of gently massaging my back. Thank goodness the bathroom was tiled throughout as a wet-room – no harm done. The towels were very thick and absorbent which was handy.

Pre-dinner drinks  of a Talisker Skye single malt for Dougie and The Botanist gin and tonic for me. This was accompanied by some canapés of feather light blue cheese baignets (deep-fried balls to the uninitiated) and tomato water (who knew that was a thing and a lovely thing at that.) Jane McAndrew chatted to us in the bar as we ordered from that night’s menu. When we had been shown our room at 4pm, Ian hadn’t decided what he planned to cook. He asked whether there was anything we didn’t like. ‘Pate,’ Dougie replied. “Well you won’t be getting that,” Ian said and I rolled my eyes thinking, why on earth didn’t he suggest something less likely to be found on the menu of a local Harvesters.

The public rooms in the Blackaddie are designed for relaxation. There’s a large library from which you can borrow books and there were some excellent pieces of art on the walls for guest to buy: works by Elaine Johnson and Kate Hamilton while we were visiting. The McAndrews take no commission from these paintings; they are happy just to promote them, taking pleasure from having great art on their walls. We liked that. We liked it so much we ended up buying Ben, the highland coo, to take home with us. 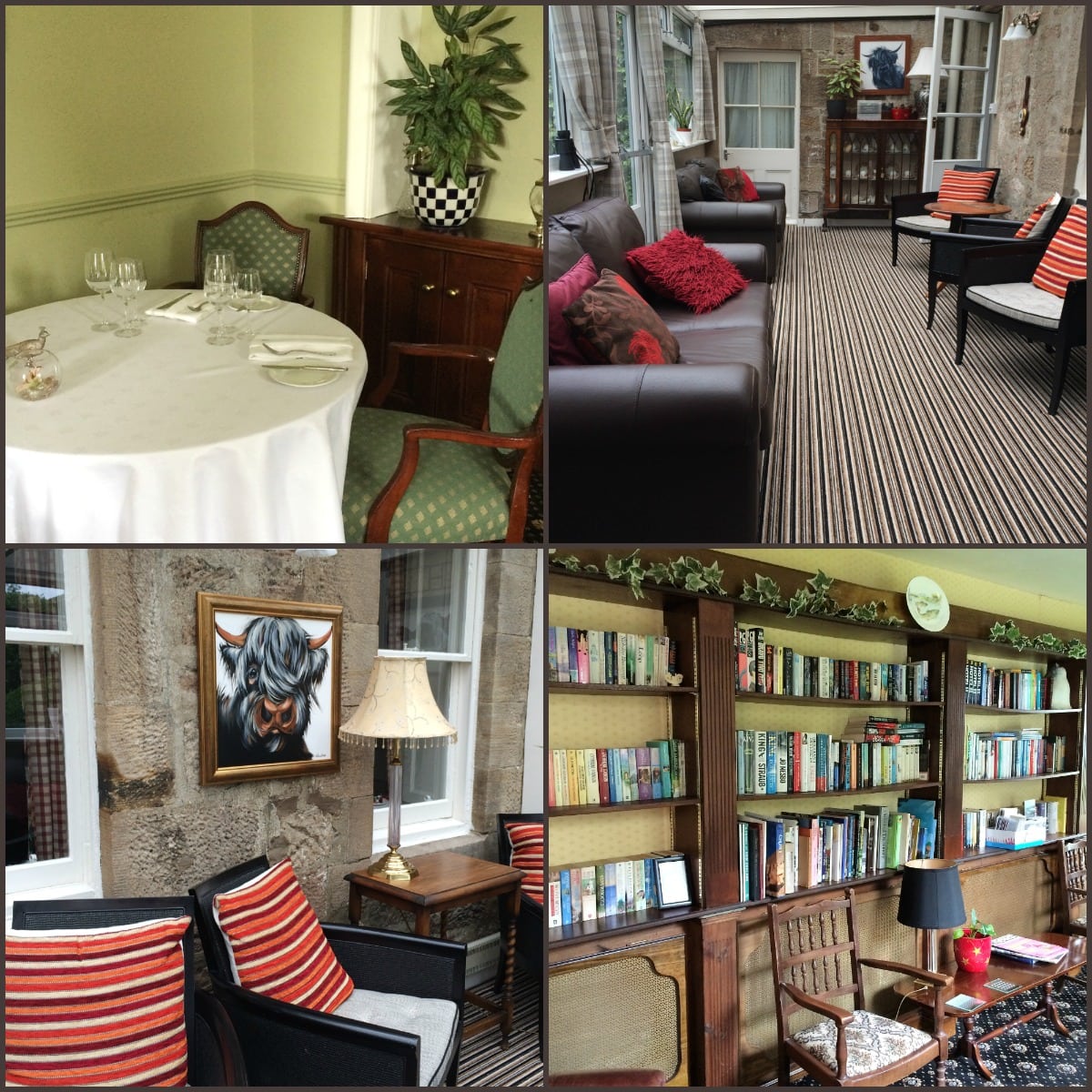 We took our seats in the dining room and felt instantly at ease: the calming pale green walls, comfortable chairs, crisp white linen. An extra appetiser of sea trout ceviche with cucumber sorbet was brought to the table and, despite just wanting to admire the detail in the dish, we did eventually gobble it up with much oohing and aahing to accompany it. 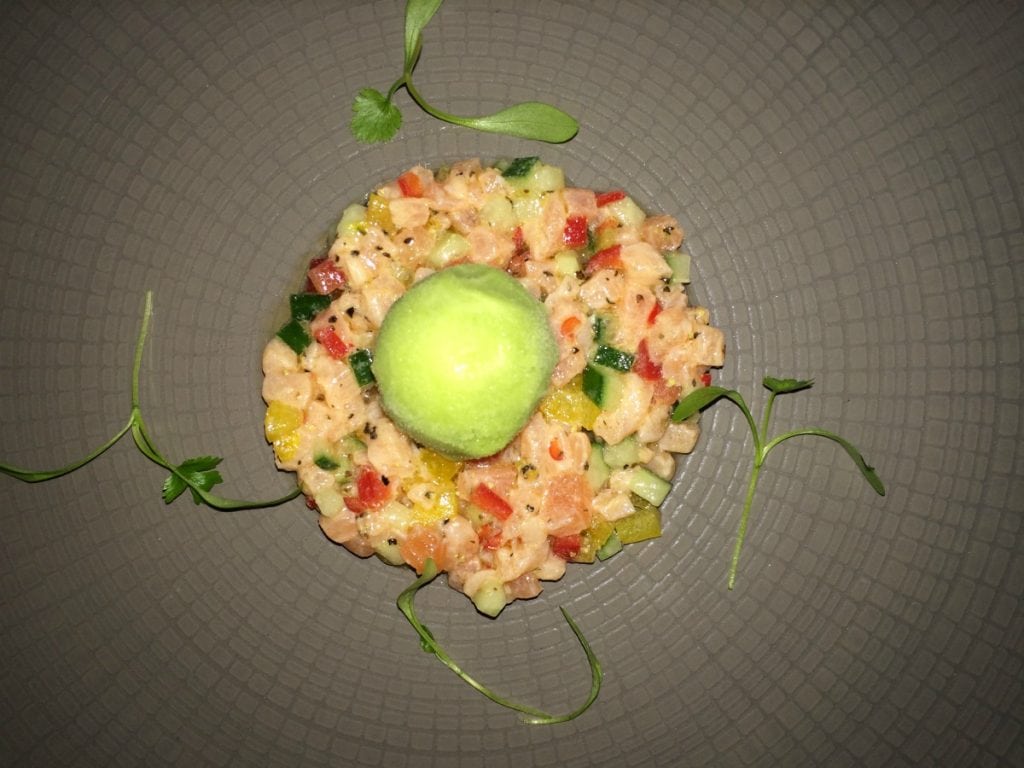 My starter was a salad of white and brown crab with pink grapefruit and crab bisque. It was extraordinary as I hadn’t expected such warmth from the frothy cup of soup. 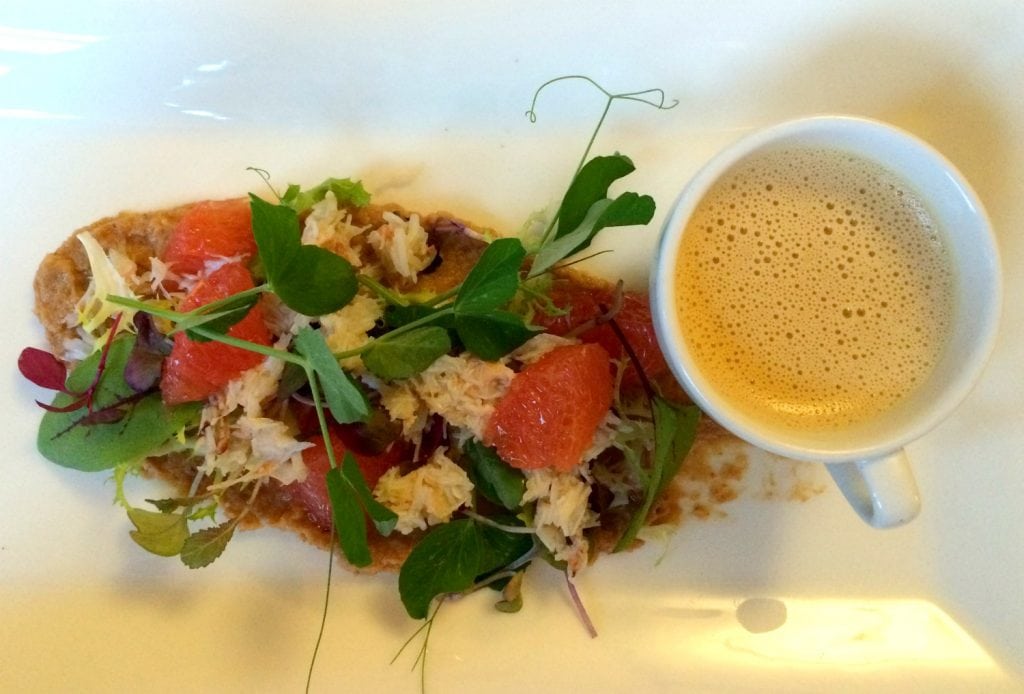 Dougie chose the roast breast and salad of quail on puy lentils with its eggs fried. Doesn’t it look delicious and how cute are those mini fried eggs? 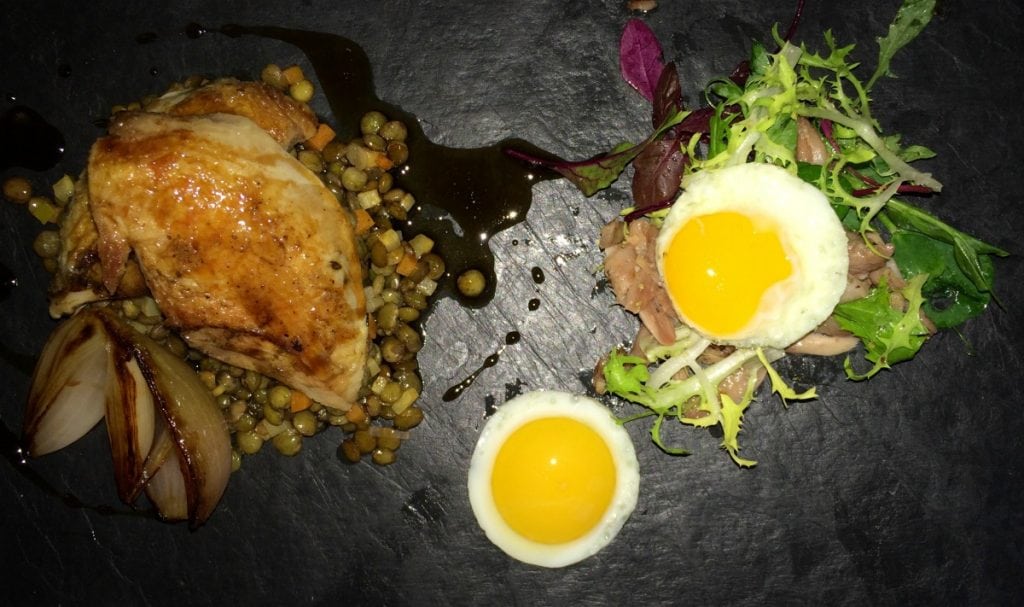 After a very tasty pea sorbet we both chose the following main course: trio of pork – slow braised then roasted belly, sautéed fillet, black pudding and pork bon bon – with butternut squash puree and lightly curried cauliflower. This was the best pork I have tasted and the heavenly thin slices of potato that accompanied it were delicious. 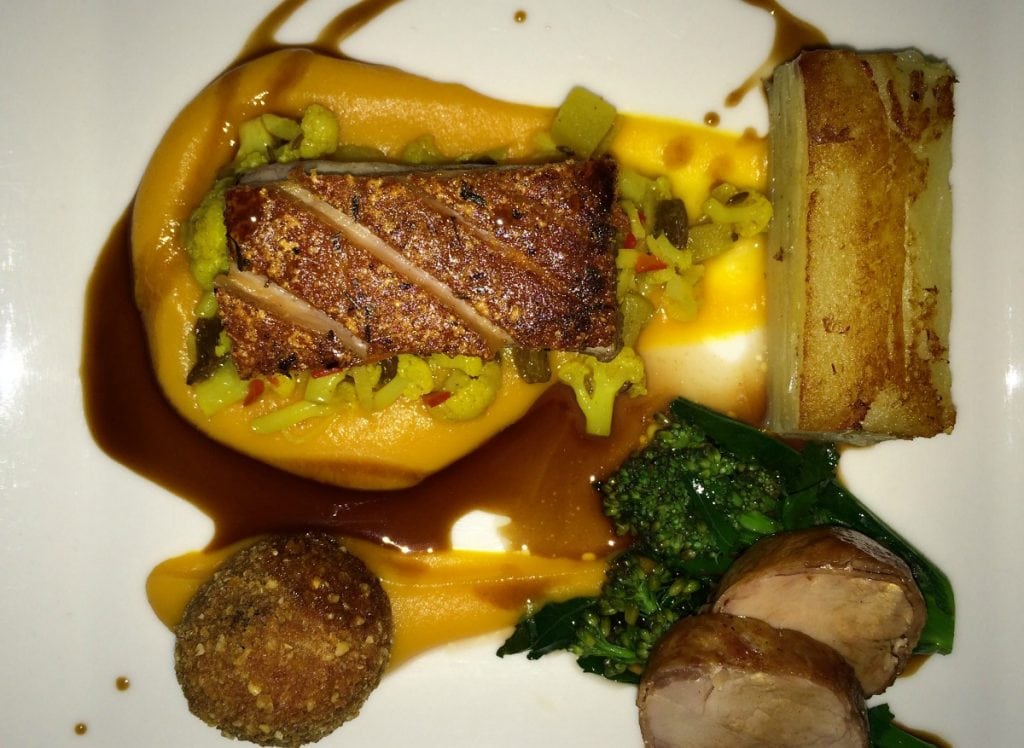 Pudding was iced lemon posset parfait with fresh raspberries, honeycomb, meringue and warm pistachio cake. This was so so good: all the best things you could want in a dessert on one plate, executed so deftly. 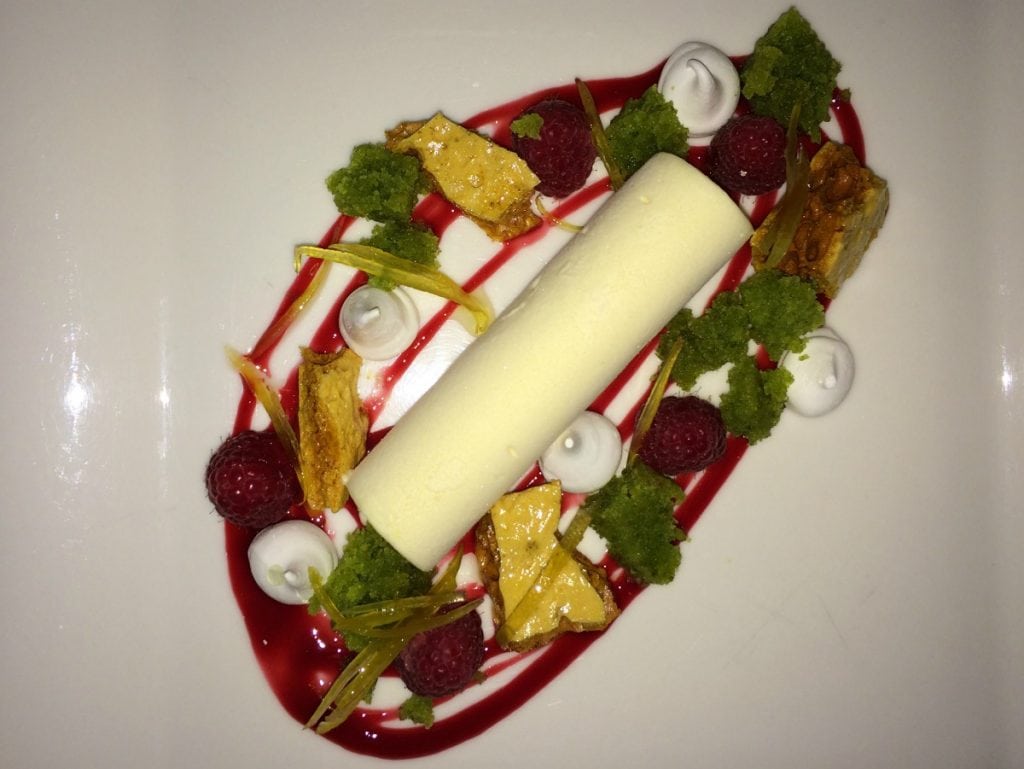 We staggered back to the bar and chatted to Jane and Ian whilst enjoying coffee and petit fours including chocolate ganache, chocolate meringue and biscotti.

Our four-poster bed was extremely comfortable: we slept like babies, having been rocked to sleep with a lullaby of fine cuisine and a bottle of Rioja.

The following morning, Ian was in the kitchen again, preparing our breakfast which was served in a different morning room. I loved that we had Radio Two to listen to as we chomped on an excellent full Scottish breakfast: home from home.

As we sadly left Blackaddie after our night of superlative cooking, I remembered what Ian McAndrew had said to us after our meal the previous evening. Having explained his devotion to providing food which looks and tastes ambrosial in equal measure, he accepted our praise with the words “At the end of the day, it’s just a bit of dinner. We’re not going to save the world with it.” Maybe not, Ian, but your food makes the world, or at least this corner of Scotland, just that little bit more pleasurable.

Linking up with Faraway Files