Home  >  Blog  >  Mum’s gone to Birmingham: things to do with teenagers

Our usual family routine when we check into a hotel is for our son to scroll through all the channels on the TV, my husband to go back outside for a walkabout and me to scoff the complimentary biscuits, suss out the toiletries in the bathroom and have a lie down.

We were too early for check-in when we arrived at the Staying Cool apartments in Birmingham so, having left our luggage at the reception desk, my son and I had to join Dad in ‘going for a wander’, which was a bit disconcerting to be honest. Thankfully we had brought Rory’s girlfriend with us and, as she was keen to start shopping immediately, she took charge of our recalcitrant son and led him onwards to Selfridges. Dougie and I were free for an hour to get our bearings and see what Birmingham has to offer.

One of the main benefits of the apartments is the location. On the top floor of the iconic Rotunda building, it’s merely an elevator ride away from the extensive Bull Ring shopping centre which features Debenhams, Selfridges and every high street store you can think of. While the teens headed in that direction, my husband steered me away from the shops and up towards the Cathedral, the Town Hall and the Birmingham Museum and Art Gallery. As this was purely a recce, we carried on walking, with me making a few mental notes as to the location of clothes shops as I had some ridiculous notion that we might return the following day.

At 3pm we waited at our rendezvous point, which was always going to be the bronze bull just outside the shopping centre. I hadn’t managed to buy anything in the time but Juliana, Rory’s girlfriend, had her arms full with bags from TKMaxx, Primark and Zara and a big smile on her face which contrasted well with the dazed and weary expression evident on our son’s. Thankfully the room was ready and some serious chilling out could be done.

Where to go for a meal that night? We were spoiled for choice and keen to not walk too far. Luckily there is a decent selection of eateries very close to the Rotunda so we booked a table at Jamie’s Italian and bowled up there later that evening. I’ve never tried his restaurants before but was very impressed with this one. A bustling, spacious room, excellent service and very good food. Plus they even served Aperol Spritz which brought back memories of our summer in Austria.

On our second day we stayed together as our plan was to head towards Brindleyplace. We had visited this part of Birmingham some years before as it’s the location for the National Indoor Arena where we had once taken Rory to see the Harlem Globetrotters perform some basketball magic. It is a modern, cosmopolitan, canal-side development with a good selection of cafes and restaurants, most overlooking the water, making it a very pleasant alternative to the central shopping area. We had an early lunch in the Piano & Pitcher, a delicious selection of tapas, thankfully eating before a swarm of office-workers piled in.

Staying in the canal area, our plan, or my plan if I’m honest, was to walk via the tow-path towards the Jewellery Quarter, a famous historical part of the city. I annoyed the whole family by quoting facts about this area from the leaflet I’d picked up from the tourist office.

I kept spouting forth all this information, my head in the book and not on the streets, as we got spectacularly lost trying to follow two different trails within the Jewellery Quarter. It all went pear-shaped at St Paul’s Square, possibly because I kept laughing at the fact that, as it had been a popular promenading spot for Victorian nannies, it had been nicknamed “Tittie Bottle Park”. I am sure we missed the best parts of the Jewellery Quarter: some of the areas we saw were a tad “cash for gold” with bouncers on the door and lurid shop signs.

It was more by luck than judgement that we stumbled across The Pen Museum which proved to be quite delightful. Accosted at the door by the friendly guide, we were taken on a personal tour, discovering how Birmingham had been the centre of the world’s pen trade and having a go at fashioning a nib. I did worry at one point we might never be allowed to leave the building until we had seen every fountain pen ever made but our guide’s passion for his subject was infectious so even when he left us to attend to other visitors, we didn’t bolt for the door. Rather, we took a seat at the desks and tried our hand at writing with a quill.

I was flagging by this stage but Rory and Juliana both wanted to visit the city’s new library. Books first, we found the striking new building which I have described on my post for BritMums as resembling a Great British Bake Off show-stopper wedding cake. Inside it was quite stunning. Welcoming and spacious with huge escalators taking you up the middle of the building. There are areas to sit outside, little gardens, oases of calm. I had never thought to visit a city’s library before but this was superb and there was a feeling that everyone was immensely proud of it. Smart loos too!

By chance, the way back to the apartments passed by The Mailbox, a shopping and office development featuring a Harvey Nichols and the offices of BBC Birmingham where we spent a happy half hour trying our hand at being a weather reporter or newsreader in their free Public Space area. Dougie is now convinced he has missed his vocation. 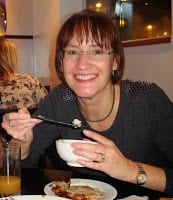 More lolling about back at the apartment and then we allowed the teens to choose where to eat that night. As Juliana was born in Malaysia, we suggested she choose a Chinese restaurant from several situated in the city’s Chinatown. She decided on Shanghai Shanghai and it was an excellent choice. Guided by her, we picked some dishes we hadn’t tried before, including a surprisingly good white cabbage dish, and won Brownie points from her by using our chopsticks correctly.

As the train was at noon the following day, Juliana was sure there was more shopping to be done on our final morning so cheerfully took our son with her. Dougie and I had a final dash round the shops too, but only had time to buy some perfume for my aunt and precisely nothing for each other. Hopeless.

There was loads to do in Birmingham and we only scratched the surface. If we come again I’d like to see more of the museums and we will definitely make a bee-line for The Electric Cinema, the UK’s oldest working cinema, where they have double sofas and waiter service.

I haven’t really given you a proper guide of ‘things to do with teenagers in Birmingham’, have I? However, those of you with teens will know that having an open agenda, some shopping time, good places to eat and plenty of sleep is probably all they need to put smiles on their faces.

We stayed in Birmingham as guests of Staying Cool apartments. All photos and opinions are my own.


If you want to know more about family friendly attractions in the area, check out my review on BritMums