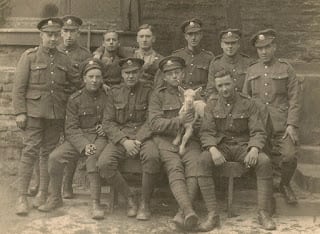 Do you remember this photograph I posted a couple of weeks ago (here) for The Gallery, the theme for that week being Faces? Well, that particular week there was a prize for the best photo and accompanying story. I’m very pleased to say this snapshot of survivors of the Great War, including my grandfather, was chosen as the winner (see the post about the win on Tara’s website)

I’m delighted the photo was acknowledged as being a little bit special because, of course, today is the 11th day of the 11th month and, this year, the 11th year of the century. Remembrance Day. A day, and a weekend, when we take time out to remember those who sacrificed their lives for us. Although these men in the photograph survived the war, they were very brave to enlist and fight for their country. They will all be dead now but they live on in photographs such as this.

The prize for the competition was a Kodak  Pulse Digital Frame and I’m going to give it to my mum. It’s a clever WiFi gadget with its own email address so I, and the rest of the family, can email photos straight to the frame. I think she’ll like it.

Many thanks to Tara for running The Gallery each week on her website. It’s the only linky/meme I have returned to regularly as I often find there is a theme which encourages me to seek out old and new photos and, more often than not, there’s a good story to be told too.