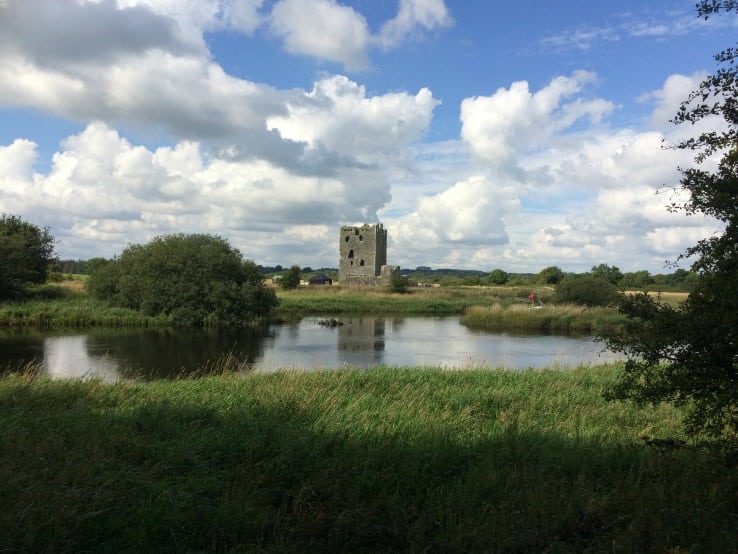 Earlier this year readers of the BBC’s Countryfile magazine voted Dumfries and Galloway the ‘Holiday Destination of the Year’ award. You can’t have a more resounding recommendation than an accolade from such a trusted, wonderfully British establishment. John Craven is on the Countryfile team and I’ve believed everything he’s said since avidly watching Newsround as a child.

In writing about our trip I have focused so far on the hotels and wonderful food we’ve eaten. I’ve swooned over breathtaking views, ambrosial cuisine and historical links. You’ll be relieved to know we did manage to tear ourselves away from the trappings of luxury to explore the region. Having early breakfasts allowed us to fit in lots of sightseeing and the route we took from hotel to hotel was planned so we saw the best of what the area has to offer.

As Dumfries and Galloway is the most southerly part of Scotland, it was easy to start exploring on our first day, despite driving from Lincolnshire. What better way to fire up a Scotsman named Douglas, than a visit to Threave Castle, which was built for the Black Douglas family in 1369. This astonishing tower was built by the 3rd Earl of Douglas after becoming Lord Galloway. Named Archibald ‘the Grim’ apparently because of his scary face in battle, the Earl constructed a fitting residence for his family and household but one which was a symbol of power and defensively strong.

Threave Castle is easily reached from the main A75 at Castle Douglas and there is a lovely 15 minute walk from the car park to the jetty where you pick up the boat to take you to the island on which the castle sits. It’s a very short boat ride across the River Dee but there was something very romantic and ethereal about it. In Greek mythology you would pay Charon the ferryman to take souls of the dead across the River Styx to Hades by rowing boat. Here you ring a large bell to call a friendly chap called Malcolm who gives you a life jacket and whisks you off to an island in a little boat with an outboard motor. It only takes a few minutes but it’s quiet, the countryside is beautiful and the castle, which can’t be seen from the car park, is all the more fabulous for its seclusion. 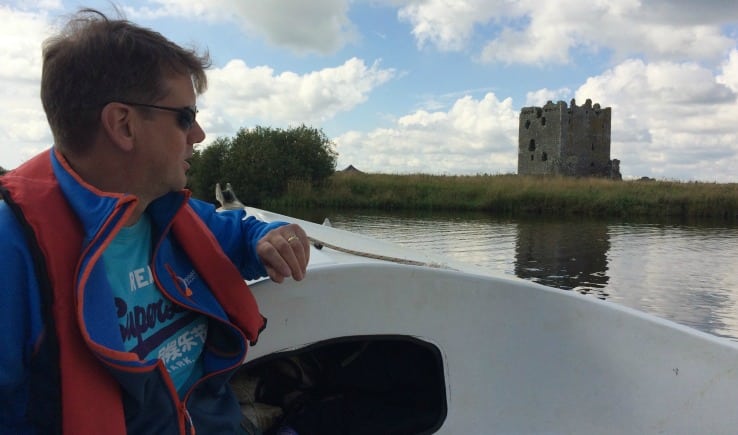 On the day we visited there were a few other families, some having a picnic on the grass, others playing hoopla or garden draughts. The castle is the perfect size for exploration and the right amount of signage gives visitors a clear idea of how things would have looked in medieval times. In its day it was a very contemporary building. It was a five-storey tower with prison, kitchen, hall and bedrooms plus a unique top floor gallery for men at arms. It would have had glazed windows and been decorated lavishly with tapestries. Today you can walk around inside and climb part of the way up, enough for some wonderful views across Dumfries and Galloway. Don’t forget to look down into the prison cell when you’re in the kitchen area (I’m saying no more). 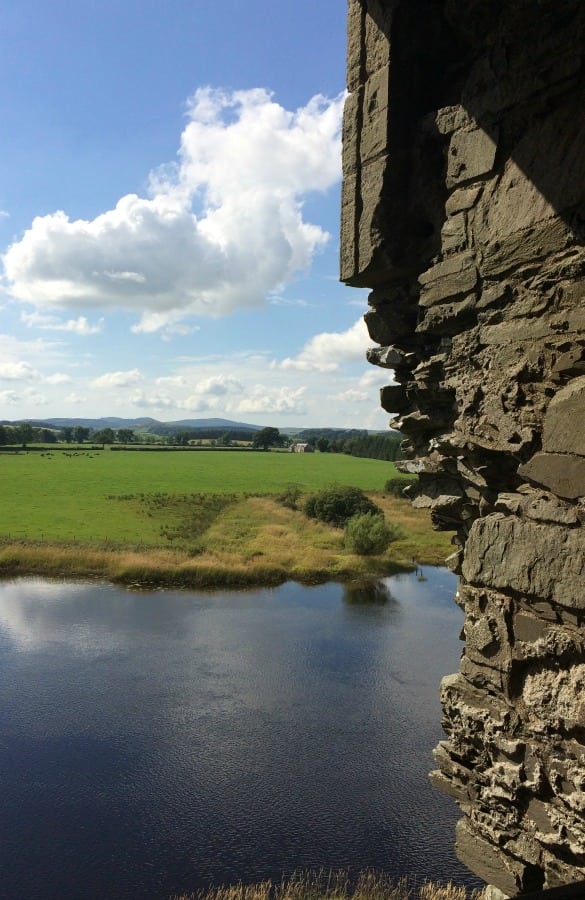 We did laugh at the external latrine chute – or garderobe – which is signposted on the castle walls: brought back memories of a very funny scene from the film Johnny English with Rowan Atkinson. If you don’t remember it, just imagine what gross thing could happen if you climbed up a garderobe to secretly enter a castle. 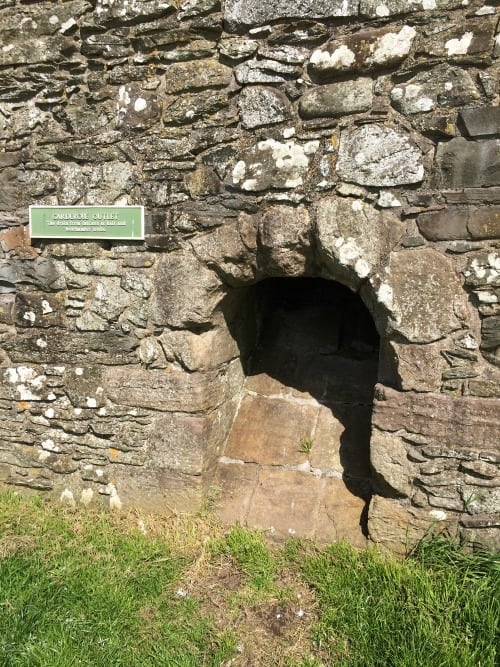 On the return leg to the car park we took a left to the viewing platform where a couple of volunteers were showing members of the public the osprey nest. With some encouragement and the building of artificial platforms, Threave has been home to ospreys since 2008 and it was wonderful to look through the  telescope and see the daddy osprey on the nest with the one remaining chick of four that were hatched this year. Mum and siblings had already migrated. In another few days, all ospreys would have left Threave and headed south for the winter.

Looking back at my photos a few weeks later, it would appear that Threave Castle enjoyed our visit as much as we did. Peeping over Dougie’s shoulder to join us in a group selfie – and is that a smile I see? 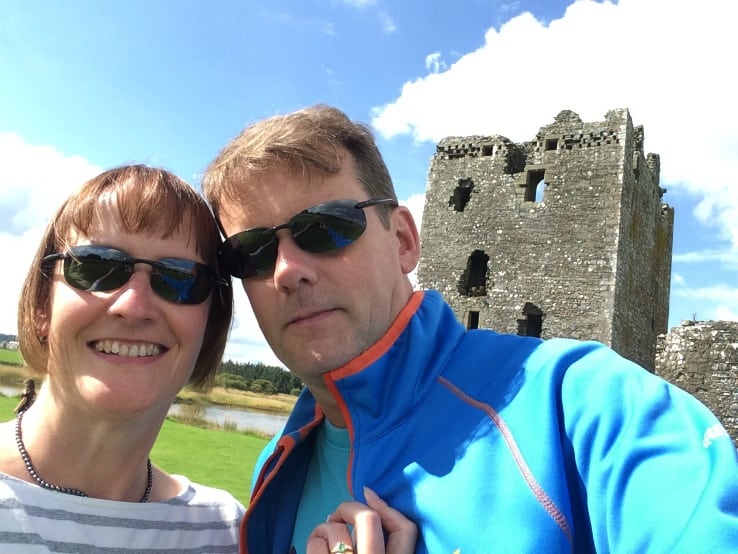 Threave Castle is open from March through to October. Prices for 2016 are £4.40 for an adult ticket including boat ride (£2.70 child, free for under 5s). For more details about opening times visit their website.  Having worked with Visit Scotland before on a trip to Glasgow and Edinburgh, the team there were happy to provide Dougie and me with a media pass from their partner organisation, ASVA (Association of Scottish Visitor Attractions) to gain complimentary entry into a number of places on our trip, including Threave Castle.