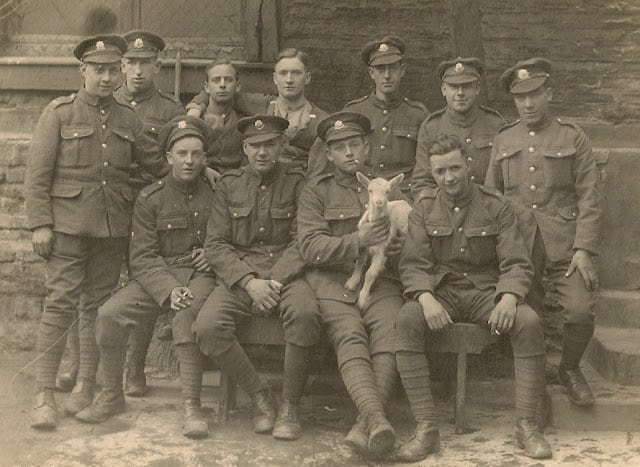 The First World War ended on 11 November 1918. This photograph was taken in April 1919;  these young men had survived. This is a snapshot in time of a group of men with their lives ahead of them, their futures uncertain but surely, with the war over, possessing hope.

They are, of course, all dead now, but the picture brings life to each individual face. The fact that these squaddies have been photographed at rest allows us to catch a glimpse of their personalities; a more posed photo would have told us very little. I don’t know how many of them saw action in France but I see weariness in some of the faces, bravado and swagger in others.

What do I see when I look at this face? The joker of the pack, I’m guessing. Cigarette hanging out of the corner of his mouth, legs outstretched, a goat on his knee. Handsome chap. Was he a bit of a ladies’ man or did he just think he was? Was he really as assured as he looks? What had he seen during the war? I wonder how was he changed by his experiences.

How about this pair? Best buddies I think. More at ease than some of the others, posing without their caps; jackets undone. Maybe they were related? Brothers-in-arms.

This man looks quieter than the rest. His cap is too far back on his head so he looks rather awkward. There’s a comforting arm on his shoulder from one of his pals. Has the camera captured sadness in his eyes?

This last face, sitting on the far right, is smiling. He looks relaxed, his posture showing him to be at ease. And I do know what his future holds.

His name is George Arthur Grinsell and he is my grandfather. He was born in 1900 and joined the army as soon as he could, aged 18, just as the war was ending, so probably didn’t see any real action. He became an accountant, married Elsie May in 1927 and had two children, Betty and my father, John. He joined the Home Guard (Dad’s Army) in the Second World War. He died at the age of 62.

I never met him. But I know his face.

Some of you may already know that since my dad died in February I have been typing up his diaries in the form of a blog ‘Memoirs of John Michael Grinsell’.  It’s been a fascinating task and one which has helped me know more about my roots. Photographs such as the one above are now coming to light and somehow, appreciating how I fit into this circle of life, is a very healing process.

The theme for The Gallery this week is Faces. To see more contributions, have a look at Tara’s website, HERE.