There’s an awful lot of water in Stockholm which makes for a breathtakingly beautiful city. Spread over many islands, with the Baltic Sea to the east and Lake Malaren to the west, the city stretches out into the open air, giving the visitor an invigorating sense of space.

Two minutes from our hotel and we could walk over Strombron bridge into the old town or choose Skeppsholmenbron to visit the island of Skeppsholmen. Nothing was very far away: a bustling vibrant city only metres away from parks, woodlands and fishing spots. I felt instantly at ease in the city: buildings are grand but not ostentatious, the streets are wide, pavements are clean, it looks prosperous. It is a capital city which doesn’t have to try hard to impress but it certainly looked its best in the warm sunshine which accompanied our stay.

On our first morning in the capital we sauntered over to Gamla Stan, the Old Town, where, south of the Royal Palace, streets were narrower, cobbled and the whole feel was more akin to a city scene in Southern Europe. The main square, Stortorget, was an execution site in 1520 during the ‘Stockholm Bloodbath’. Now it is a place for relaxing, eating and drinking. The streets leading off Stortorget are packed full of craft and souvenir shops, together with a good selection of restaurants. Forgetting we were in Sweden and not Italy, we had a great lunch in Restaurant Michelangelo. The walls are decorated with scenes from the Sistine Chapel which is all very well but a little off-putting when you are happily chomping on a capricciosa and can see Adam’s salami dangling in your line of vision.

Tagged onto the west side of Gamla Stan, over another bridge and you are in Riddarholmen. On a sunny July day, when many Swedes have left Stockholm to go on their own holidays, there are pockets of the city which are empty and it was a real joy to have these spots to ourselves. In fact, throughout the whole holiday it became a daily event to find a good bench to sit on. Having a family of three is, I have discovered, the optimal number for bench-sitting: plenty of room for all cheeks and the option  for one member of the party to shuffle along to one end if he or she is having a sulk. Mood swings linked to blood sugar levels were a common occurrence on our trip: a sit on a bench to slurp drinks and eat apples stolen from the breakfast buffet soon restored the equilibrium.

Returning back to the main city, via Riksgatan, we came across this sight: 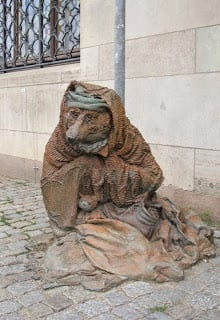 “Ooh it’s one of those living statues” I said, pointing at the unmoving animal dressed in rags.
“Must be bloody clever if they can get a fox to stay still for that long”, replied husband, slowly shaking his head in disbelief.

This little bronze sculpture was called ‘Rag and Bone with Blanket’ and was created in 2009 by Welsh artist Laura Ford; part of a series where she used characters from Beatrix Potter to show how people can become disenfranchised from society. Mr Tod, the fox, represents homelessness.

It was a different animal altogether which caught our eye when, later that evening, we walked through the central park, Kungstradgardsgatan, and saw people outside TGI Friday’s restaurant.

“Why are all those people dressed as Scooby Doo?” asked Rory. “Is it a stag night or something?”

On closer inspection, it would seem the Scooby Doo impersonators were normal diners, wrapped up in orange/brown fleeces to keep warm. We were happy walking about without coats but the Swedes do like to eat outside if possible and like to stay toasty when doing so.

Well I guess that wraps up this mystery! 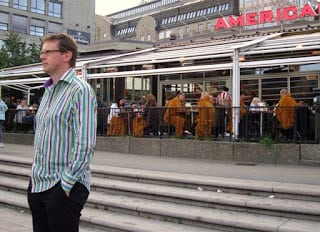