Home  >  Blog  >  A high degree of luxury and learning in Coimbra, Portugal 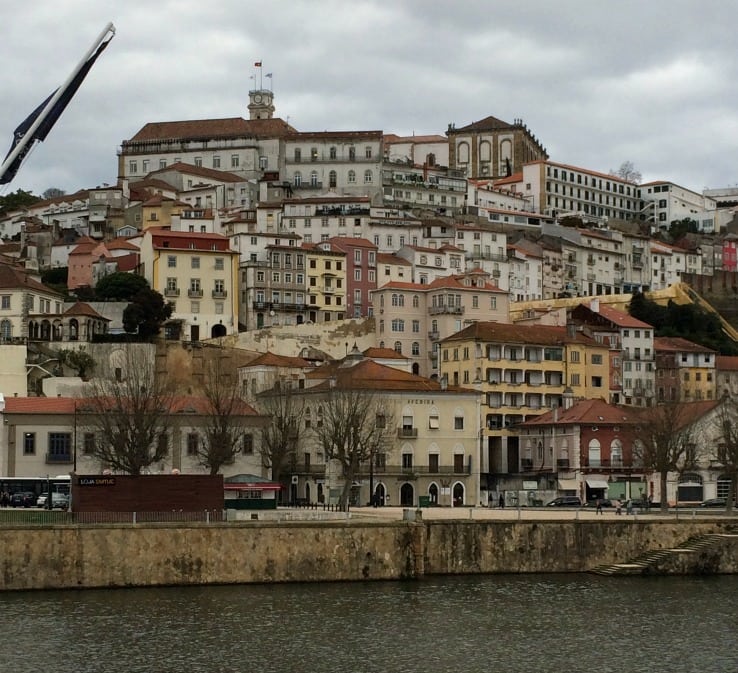 There was one small problem we had with Coimbra, even before we arrived. How to pronounce it. I thought it was kwom-bra or maybe koym-bra. I checked online and various audio files seemed to suggest it was kwi-br,  kwem-br or kweem-br. We made a point of contriving not to say it at all during our stay.

The second part of our Inntravel  ‘On The Waterfront’ holiday began with a smooth taxi ride from our hotel in Porto to the railway station. In this short journey we learned all about the vagaries of the Portuguese taxi system from our very affable driver. It’s far more expensive to take a taxi from the airport to the city centre than vice versa because the tariff is much higher on an airport start. He suggested it usually works out cheaper to order your taxi to come from the centre to collect you than it is to pick up a cab at the airport itself, despite it being double the distance. A tip worth remembering for next time.

Inntravel had already booked our tickets and reserved seats on a very civilised mid-morning intercity train to Coimbra. An hour later we were in the back of our second taxi of the day. We reckoned this one was auditioning to be the next Jason Statham in a Portuguese version of Transporter.

Two nights of luxury were about to begin at the Quinta das Lágrimas, a boutique hotel, part of the ‘Small Luxury Hotels of the World’ group. You can read about the history of the palace and its grounds in a previous post about the lovers Pedro and Inês. 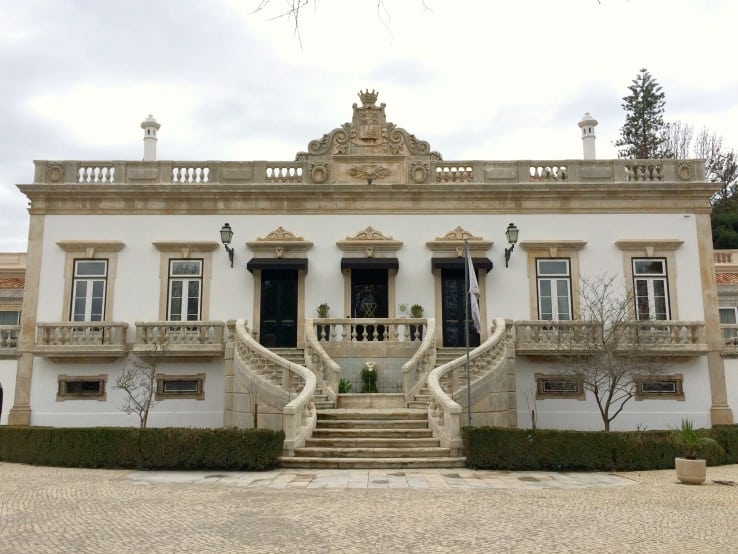 We were upgraded to a suite in one of the garden rooms. It had a separate living room and a little balcony, with french doors leading out to the gardens. I could imagine how fabulous this would be in warmer months, slipping out of the doors across to the outdoor swimming pool or catching the sun in the Japanese garden. But the dark evenings of January had their own benefits – the bar, which was decorated with dark green walls like a sophisticated gentleman’s club, had a roaring log fire. The perfect place to sip the complimentary residents’ cocktail before dinner.

Visiting midweek in low season does make you feel you have the run of the place. We ordered afternoon tea in the music room and had the whole room to ourselves. Hot chocolate in the lounge? Of course, where would you like to sit? We spent an hour or so by the indoor pool at the Bamboo Spa and had the choice of beds.  We chose to have our evening meals on both nights in the restaurant, Arcadas, which is noted in the Michelin Guide, and experienced the most attentive service as well as sublime food. Even the lovely waitress at breakfast was pressing Pasteis de Nata into our hands as we headed off for the day. Is this how visiting royalty feel? 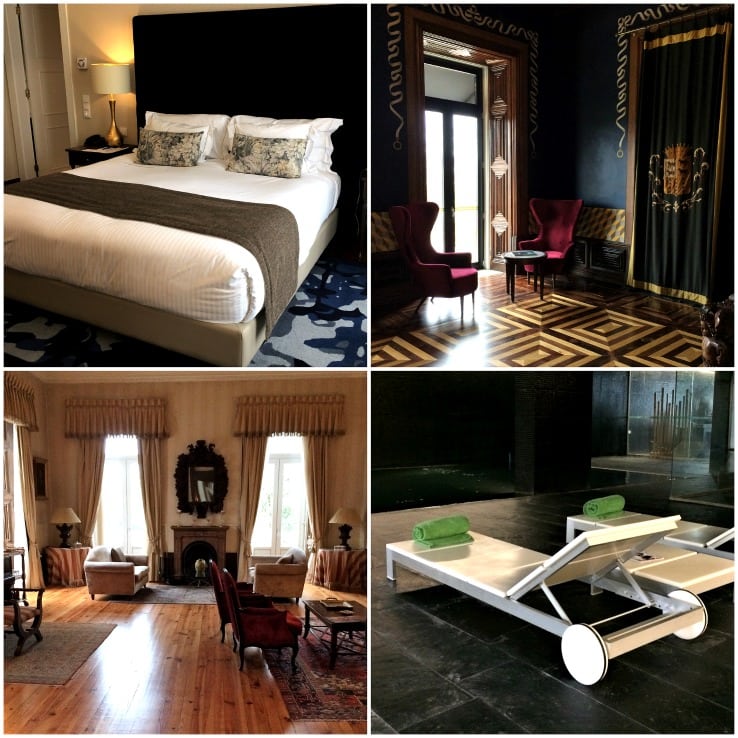 On our first afternoon in Coimbra we braved the drizzle and headed over the river to the main part of the city. In Porto we had gone a little off-piste from our walking trails provided by Inntravel, preferring to pick out some highlights and just find our own way. In Coimbra I insisted we follow the trail and took great delight in being lead scout, with a map in one pocket and the instructions in the other. Husband Dougie, who had led me astray in Porto, behaved himself and followed my lead.

The trail took us through ancient toll-gates, pretty squares and a shortcut through the market which, unfortunately, had just closed for the day. A cleaner, washing down the tiles of the fish market, was rather surprised to see two determined walkers sloshing their way across her recently mopped floor. We smiled, nodded and headed for the exit.

At the very top of the steep hill we reached the heart of the historic university of Coimbra. We were perplexed to find the university area rather lacking in students as we walked around. It was only when we stumbled into the vast quadrangle that we discovered where everyone had been hiding. There was a huge ceremony taking place: the President of Greece was accepting an honorary degree. Having wandered past a number of armed security guards and sleek government vehicles, we joined the crowds waiting outside the Joanine Library.

With perfect timing, the doors opened, the band struck up a tune and all the dignitaries poured out of the building. It was the most astonishing sight. I don’t think I have ever seen such splendid robes and headgear. Thoughts of candlewick bedspreads and tasselled lampshades came to mind as they walked past the chapel and up the steps to the ceremonial hall. 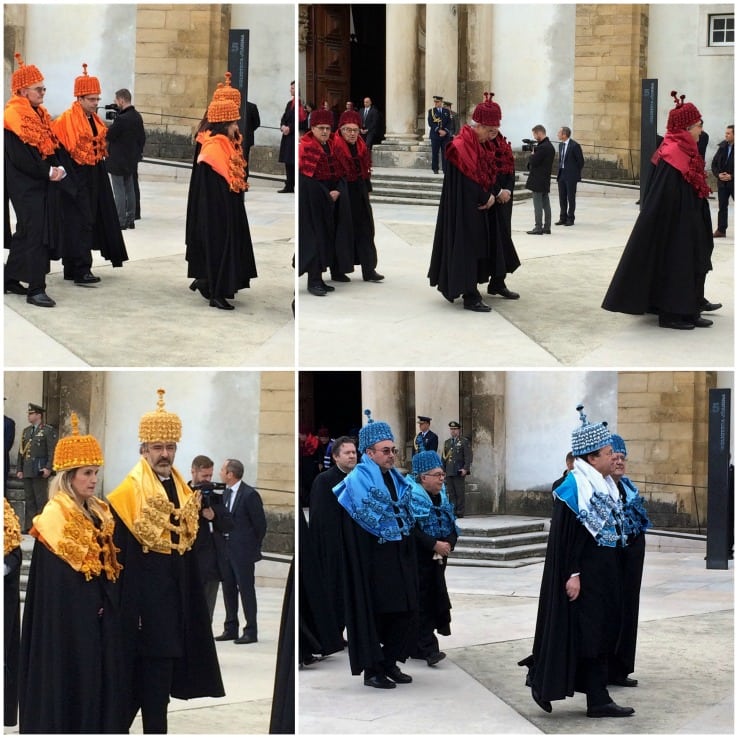 Cheered by this colourful sight, we remained in the quadrangle and admired a statue of Henry VIII. The plaque told me it was, in fact, Dom João III, King of Portugal from 1521-1557. Hmm. Maybe they had the same tailor? 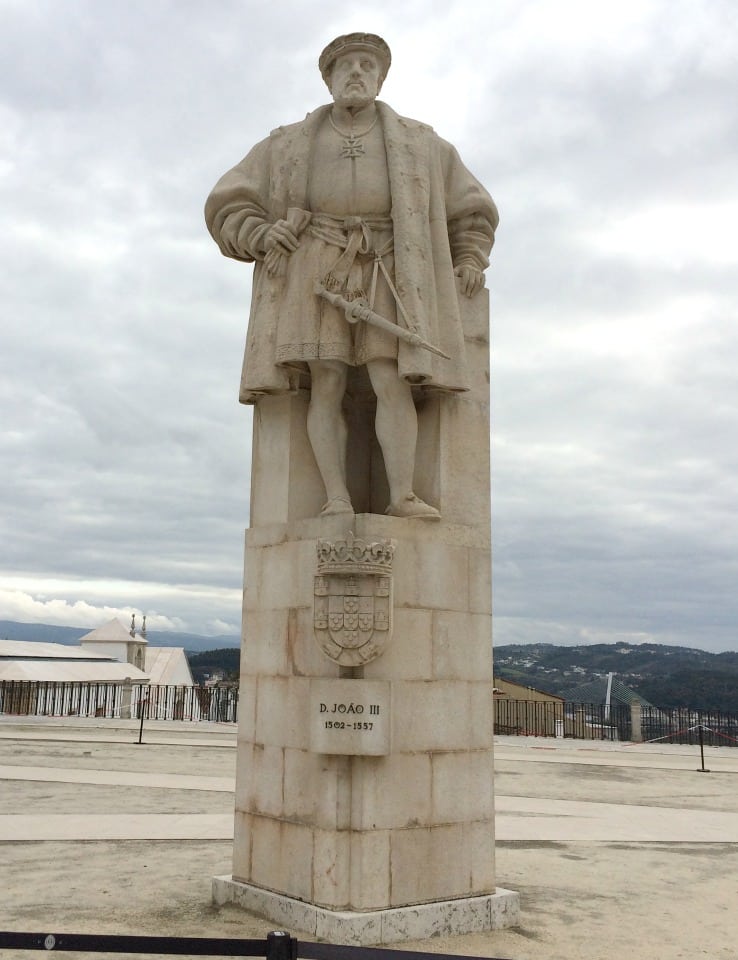 The following day we revisited the university in order to look around the inside of the buildings which had been closed off to us the day before. The Joanine Library was my stand-out favourite with its magnificent ceilings and bat stories (see previous post) but we were also delighted to look around St Michael’s Chapel. We entered via the grand portal, decorated in Manueline style typical of many Portuguese buildings – grand pillars with intertwining sea symbols. To enter the chapel itself you need to knock on the wooden door or press a bell and wait for someone to let you in. Most visitors are keen to see the baroque organ dated from 1733 and interior walls decorated with thousands of tiles. 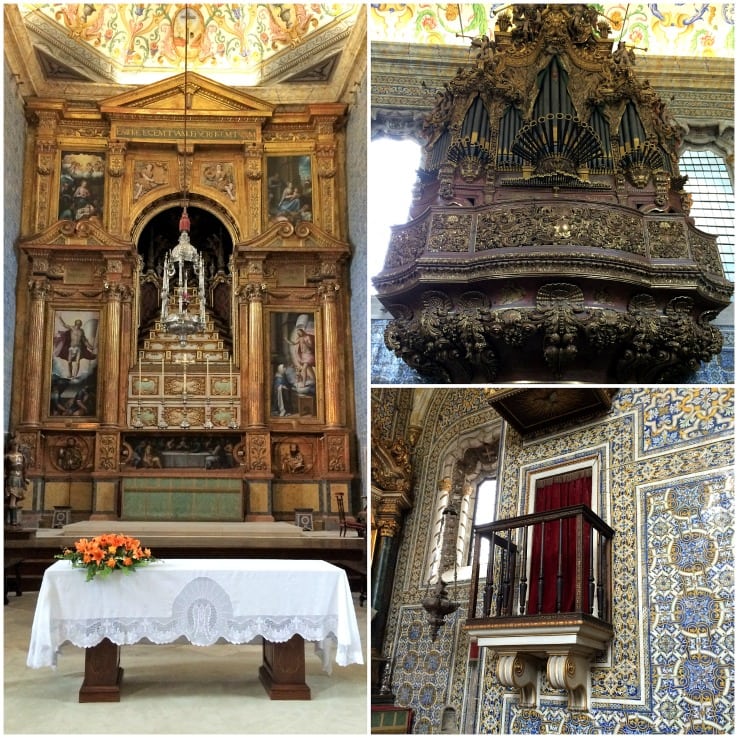 We enjoyed a budget lunch in one of the students’ cafes and continued our tour of the quadrangle buildings. Our hearts stopped when we peered through an upstairs window into the Grand Hall. The dignitaries from yesterday had departed and instead there was a lone figure, sitting across from a group of examiners, taking his PHD oral exam with a small group of family members watching in the audience. Dougie and I were immediately transported back to our own university days and we broke out into a sweat as we watched the poor chap being quizzed.

I do hope he passed with flying colours and was able to don a colourful shawl of his own…and maybe a fancy hat.

Inntravel (inntravel.co.uk 01653 617000) offers On the Waterfront, a walking and rail discovery of Portugal’s three great cities, Lisbon, Coimbra & Porto from £580pp based on two sharing including 6 nights’ B&B in 4-star hotels, self-guided city walking tours, and rail journeys Lisbon to Coimbra & Coimbra to Porto. Available 2 January-24 December. Flights (cost extra) into Lisbon and out Porto. The holiday can be taken in the opposite direction, flying into Porto and out Lisbon