If you can’t stay in a castle when you’re on holiday then why not do the next best thing and stay in the hotel next door.

The Castelo do São Jorge is one of the most visited sights in Lisbon, perched on top of the hill in the historic Alfama district of the city. With fortifications from Roman times, there has been a presence on the hill for centuries. The Moorish castle eventually became a royal palace in 1300 and despite significant damage in the Lisbon earthquake of 1755, it has remained ever since, towering above the city and the River Tagus below.

In the 18th century a mansion was built within the castle walls on the site of the former Alcáçova Palace kitchens. It was known as the “Palacete das Cozinhas” (Kitchen’s Little Palace). The building is now a luxury boutique hotel, the Solar do Castelo, but artefacts from as far back as the Iron Age, 600BC, have been found during excavations and are kept in a small museum in the basement of the hotel. 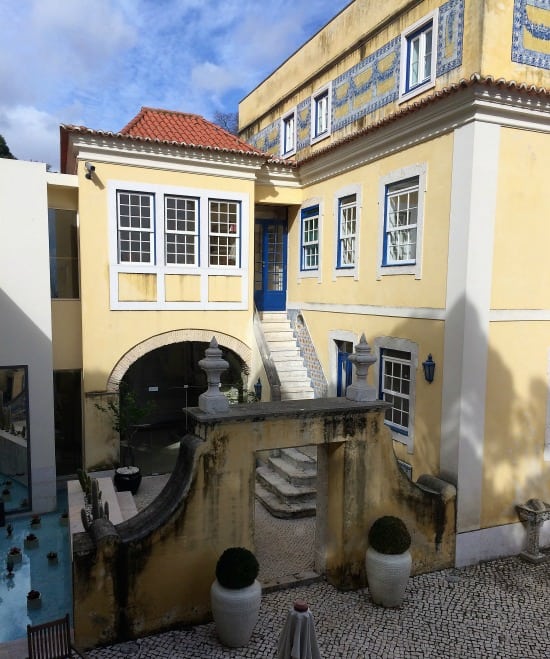 To reach the hotel requires strong calf muscles or the wherewithal to hop on a bus or tram which will take you part of the way up the hill. If you’re arriving by taxi, like we did, you’ll have to hope your driver has been before. Ours hadn’t and despite a photocopied map showing directions, was only able to negotiate the extremely narrow cobbled streets in the castle village with the help of a passing policeman.

But it was so worth it. 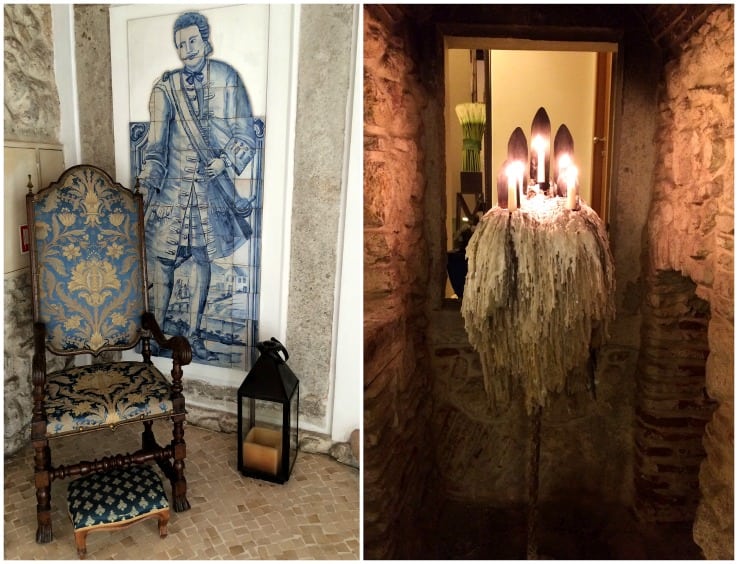 The Solar do Castelo is an exquisitely renovated, upmarket hotel which retains the history of the building in a very sympathetic way. The large wooden blue door leads to a cool entrance lobby, with original Portuguese blue and white tiles on the walls, an antique upholstered chair and a tall candle-holder groaning under layers of hardened creamy white wax.  Through the glass doors you can find a small courtyard with a shallow pool/water feature and scrubbed wooden tables and chairs. 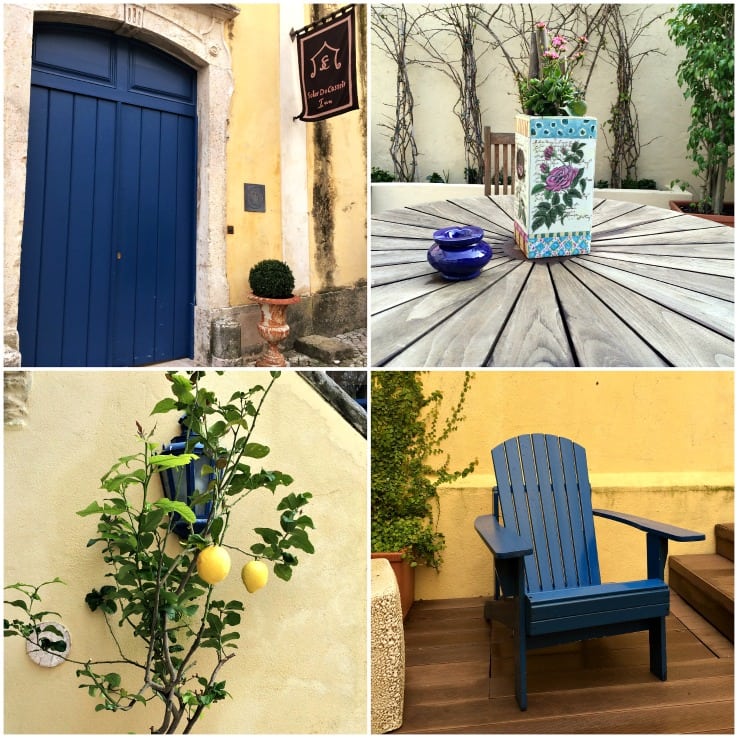 The lounge area doubles as the breakfast room, with traditional dark antique furniture. Guests help themselves to free Nespresso coffee and teas all day plus a regular supply of pastries. There’s an honesty bar too, with all the equipment for rustling up a cocktail or two.

Our bedroom was traditionally styled but not at all old-fashioned. Pillowcases edged with Broderie Anglaise, burgundy velvet cushions, a dressing table with a complimentary carafe of port, topped up daily. I stood on our tiny balcony and looked out over the courtyard and castle grounds where the resident peacocks wandered languidly in the sunshine, letting me know they were there with an occasional squawk. 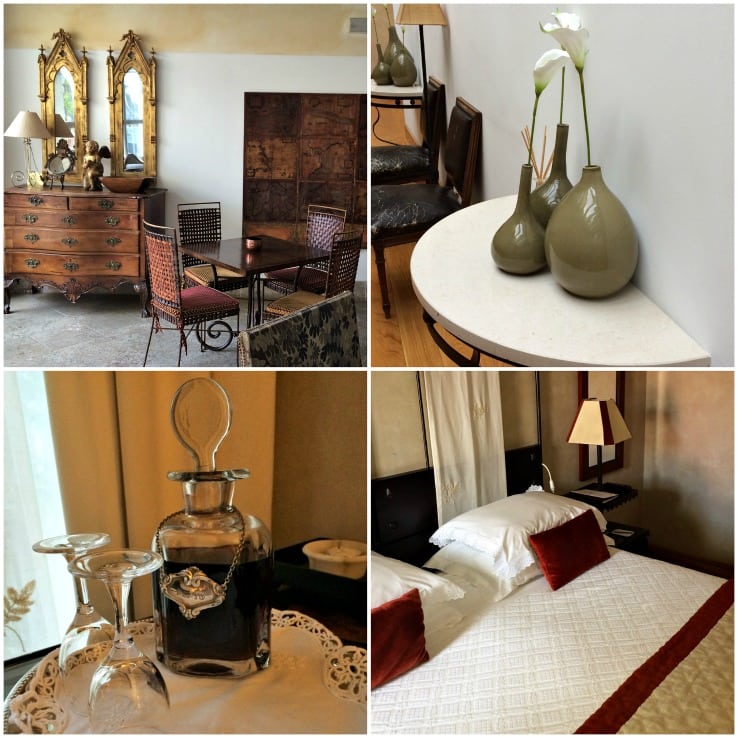 Most of the guests were similar to us; couples of a certain age enjoying – I’m guessing – a short break now their children have left home. There was a serenity about the hotel, whether at breakfast as we all quietly sipped on fruit juice from dark red glassware, or in the afternoons when we poured ourselves cups of coffee and unfurled maps to plan the next day’s sightseeing.

On a weekday in February, outside of school holidays, this was the Lisbon equivalent of The Best Exotic Marigold Hotel for empty nesters and the recently retired – a sanctuary from the hustle and bustle of Lisbon. I half expected Judi Dench to saunter in and help herself to a Pasteis de Nata…

Eating out in the castle village

Of course, once you’ve escaped the city and are welcomed back to the Solar do Castelo in the late afternoon, it’s very difficult to tear yourself away. The thought of hoofing it all the way back to the city centre for dinner was just too much to contemplate for our old joints. Dougie and I decided to seek advice from our Inntravel file which was packed full of suggestions, several restaurants being close to our hotel. The castle village is very busy during castle opening hours but when the gates shut for the day and the tourists shuffle back down the hill, the cobbled streets belong to the residents once more. Heading out each evening we felt part of the community and this made our dining experiences particularly special. 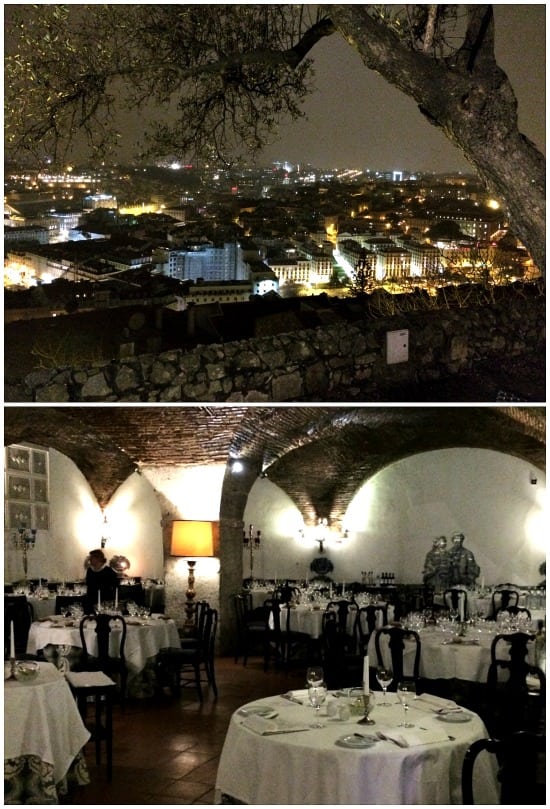 Casa de Leão (The House of Lions)  –  this vaulted restaurant used to be a wing of the royal palace where lions were kept during the reign of King Afonso V. Thankfully free of big cats today, the establishment is located within the payable part of the castle. When the castle is closed, the restaurant remains open for bookings. We made a reservation via our hotel reception and were instructed to make ourselves known to the guard at the gate. He let us in and pointed the way to the restaurant. It felt incredibly strange to be walking along the castle paths once all the paying visitors had been turfed out. Even more strange; the restaurant was empty. All the tables were dressed and all the waiters were…well…waiting. We were shown to a prime spot, overlooking the castle walls so we could see the lights of Lisbon beyond.

It was a magical evening. For an hour and a half we quaffed huge gin and tonics, slurped sublime soup and feasted on sea bass and Portuguese steak. It was pricey but the beautiful surroundings and the attentive service made the expense totally worth it. Dougie pretended he had organised it this way, making a grand gesture of booking the whole restaurant just for us. Of course I didn’t believe him but there was certainly a Lady and the Tramp ambience as we shared our romantic meal together with the smiling waiter standing by.

Just as we were shaking our heads in wonder at the absence of any other diners, we spotted a young woman outside leading a group of people towards the entrance. Then about 80 people tumbled through the door. They were all carrying umbrellas as the rain had just started to fall. In an instant we realised that the restaurant had been empty as it was expecting a group booking. These people had been attending a conference and, as they took their seats, we could see the reason for the set tables and quantity of waiting staff.

We were just paying our bill as they all sat down so the timing was perfect. As we left I glanced at the corporate brollies deposited at the entrance. I think the brand name on them was Vileda. What a fabulous way to finish your mop conference. 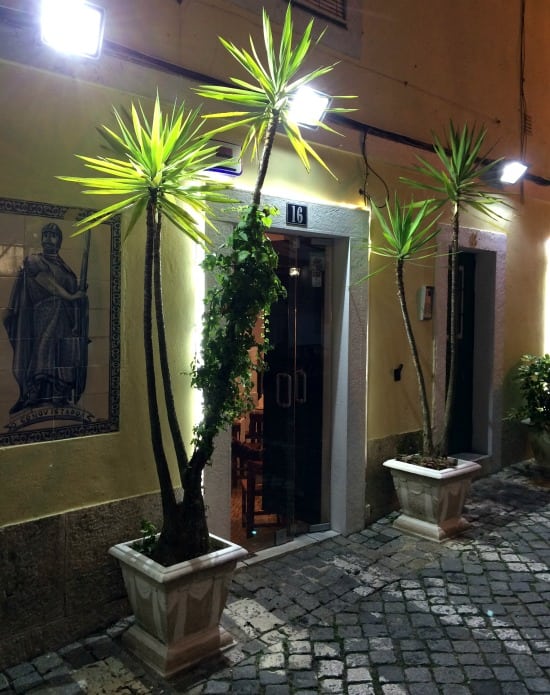 There was something appealing about the entrance to the O Conquistador that made us go inside. We hadn’t booked but as we walked along the Travessa de São Bartolomeu, the owner invited us in to take a seat. This was a small, family run restaurant, probably packed full of tourists during the day but now just a couple of tables were taken. The owner’s children kept popping in and out and I think it was probably the grandparents who also settled at a table near us.

A selection of bread, olives, cod balls and cheese were brought to our table and we ordered a carafe of unbelievably cheap red wine. Our mains were roast octopus on baked sweet potato and kale and a game pie with butternut squash puree and green salad. We shared a piece of chocolate cake and were treated to glasses of complimentary port before we staggered home. Authentic, tasty and within two minutes walk of our hotel – perfect. 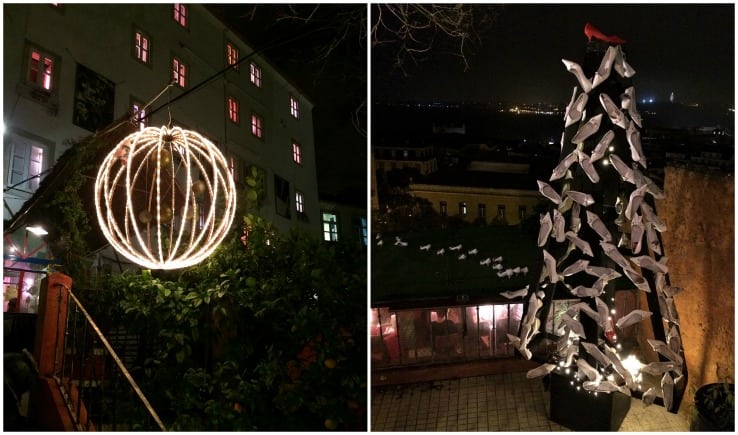 How can I describe Chapito a Mesa? It used to be a prison but is now a state-funded school for circus performers. Somehow this quirky establishment in nearby Costa do Castelo has made a name for itself for its superb cuisine.  There’s a bar, a large terraced area for eating plus an upstairs room for a fine dining experience. There’s also a room for students to use for discounted fare. You enter via a little shop, take the door to go outside then take the steps down, passing a surreal shoe sculpture on the way. We didn’t book, though probably should have, but were lucky enough to be shown to a table in the circus tent, right next to the heater, which was very welcome on a cold February night

We chose the fish of the day, sea bass, which came whole and barbecued with lots of fresh veg and potatoes. So tasty. I think this must have been a beer night rather than wine, but either way, for our final night in Lisbon, we couldn’t have chosen a better way to experience a fantastic atmosphere and really good food.

There are so many great places to stay in Lisbon so I’m not sure Solar do Castelo would have been on my radar if I’d been looking myself. It was chosen for us by our travel company, Inntravel, and it proved to be an exceptional decision. Our own special place in Lisbon, within the castle walls, and with such memorable places to eat nearby. Well worth the uphill climb to be the king and queen of the castle. 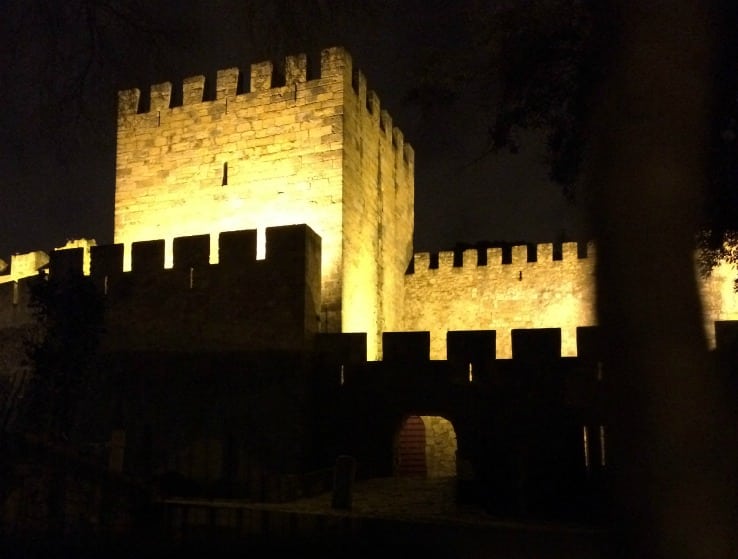 Inntravel (inntravel.co.uk 01653 617000) offers On the Waterfront, a walking and rail discovery of Portugal’s three great cities, Lisbon, Coimbra & Porto from £580pp based on two sharing including 6 nights’ B&B in 4-star hotels, self-guided city walking tours, and rail journeys Lisbon to Coimbra & Coimbra to Porto. Available 2 January-24 December. Flights (cost extra) into Lisbon and out Porto. The holiday can be taken in the opposite direction, flying into Porto and out Lisbon