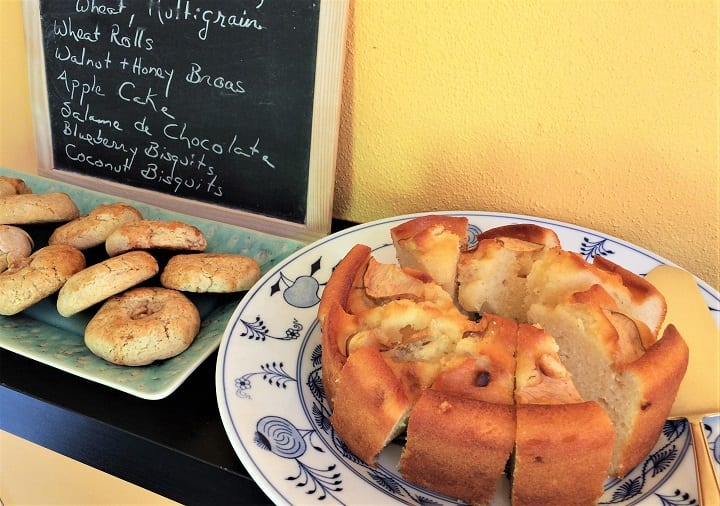 Staying at the Quinta Colina Flora, which is part of the Veggie Hotel group, we were curious about breakfast. Would we crave bacon and sausages? Fear not, owners James and Aasta rustle up the most delicious food for their guests in their adorable guest house. Aasta’s homemade granola, baked bananas with coconut and warm baked apricots were the highlights for me.

My eyes and belly were also drawn to the pastries and cakes. An assortment of bread was provided plus treats like scrumptious apple cake. I embarrassed myself by not understanding James when he pointed out the ‘Salame de Chocolate’. I thought he said ‘Salome’ and immediately started twirling the Dance of the Seven Veils. James, rather puzzled, explained the little biscuit pieces in the chocolate made the cake look like cured sausage. I discovered later that it’s a traditional Portuguese dessert, rather than a tease for meat-lovers. 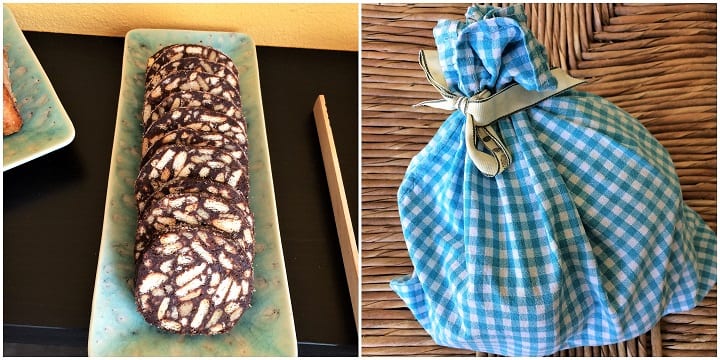 I think Colina Flora won the prize for providing the prettiest picnic lunch. Wrapped in gingham and tied with a little ribbon, it was a delight. I was tempted to tie it onto the end of my walking pole and pretend I was Dick Whittington. Dougie said I’d already made a fool of myself once that day.

Another hot day lay ahead of us. We had an 11km walk which would take us about 4 hours, 40 minutes. A circuit, it involved a trip to see a chapel-like pile of boulders and the Capuchos monastery before returning to our hotel.

The first kilometre was an uphill slog and I kept having wistful thoughts about the swimming pool and cold beers back at Colina Flora. I put these thoughts firmly from my mind until the gradient flattened out. After about an hour we reached Adro Nunes and only then appreciated why Inntravel had taken us on this detour to see a pile of stones. They were indeed ‘chapel-like’ and on a day with a cloudless sky, the views to the coast were excellent.

We stopped for our picnic at another rock formation; the Sister Stones (Pedras Irmas) located in a dreamy, woodland setting. This provided welcome shade and a place to sit. We noticed a family group also having their lunch, their car parked nearby. How lovely, I thought, three generations enjoying the health benefits of a day in the Sintra-Cascais Natural Park. Until I ambled past them, to put our rubbish in the bin, and noticed they were all happily tucking into huge buckets of KFC. We had just polished off a tasty cheese and red pesto roll with a bag of carrot sticks but I couldn’t help but think…mmm chicken!

We reached the Convent of the Holy Cross, otherwise known as the ‘Convent of the Capuchos’. Franciscan monks lived here from the 16th to the 19th centuries. It’s also known as the ‘Cork Convent’ because the tiny rooms, hewn from stone, were cleverly lined with local cork to provide insulation. These cells had niches carved out to accommodate the monks’ legs when asleep. They also had very low door frames to ensure the monks bowed low in humility. You can see from the photo how low they were as Dougie is on his knees in the corridor outside the cells. 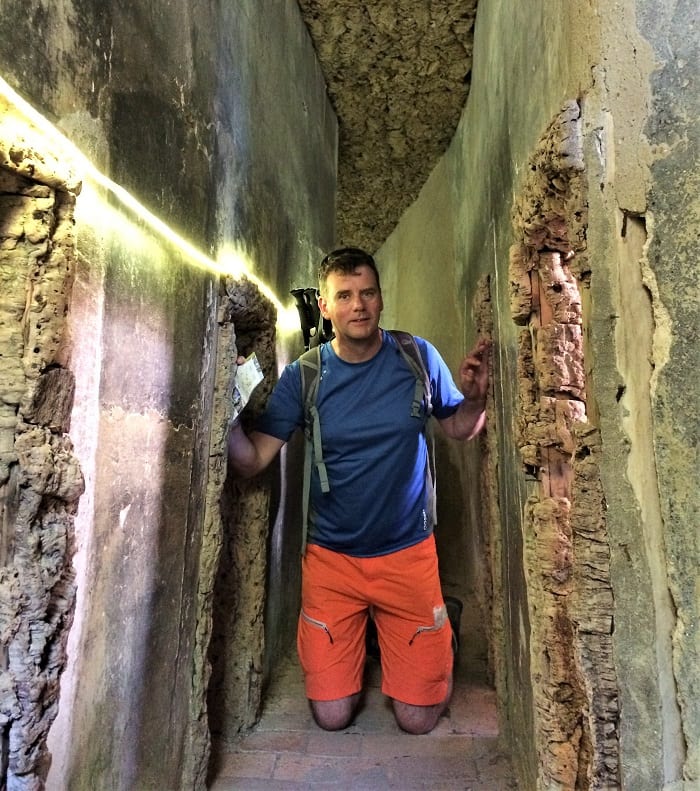 The final part of the day’s trail saw us following the contours down the valley and along traditional ‘caminhos’, marked with beautiful tiled signs. Passing two old windmills we reached the village of Penedo. It was extremely warm at this late stage of the afternoon and our trail took us up and down many steps in the town. I was a bit grizzly at this point. We passed a bar, Refugio do Ciclista, mentioned on our walking notes as an ideal spot for cyclists and walkers to take refreshments. The notes indicated it was closed on Sundays. It was Sunday. 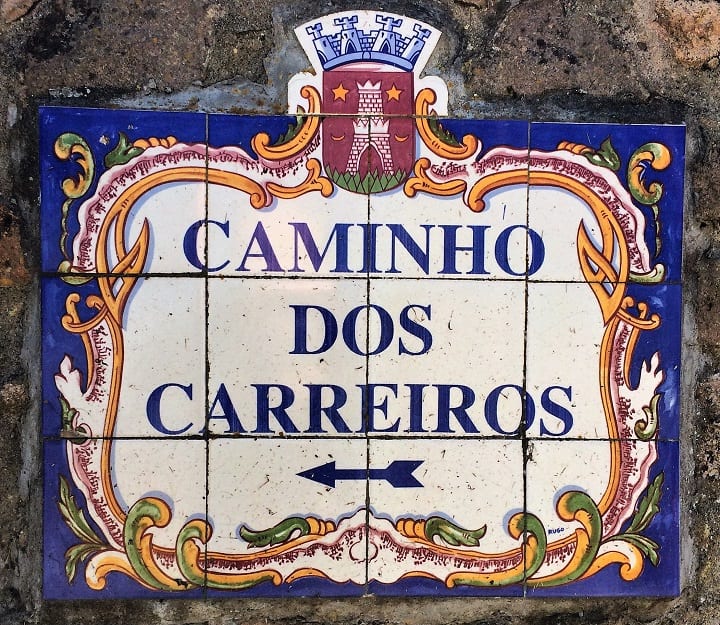 At last, at the end of a tiny uphill track, we appeared on the road, with Colina Flora directly opposite. Refreshed with shower, wine and a snooze on the terrace, we met up with our Inntravel walkers to discuss where we were going for dinner. Colina Flora occasionally provides an evening meal but on most nights James drives guests to local restaurants and picks them up again afterwards. It’s a fantastic service.

He booked a table for us on both nights of our stay and each one served excellent food. On our first night we all dined at a large table in Sisudo, a restaurant packed with locals.  Dougie had an exceptional Tuna Tataki followed by a veggie burger (something must have rubbed-off on him staying with James and Aasta). I had salmon ceviche with mango salad followed by a fish curry with apple chutney. One litre of house red cost 5.50 euros. 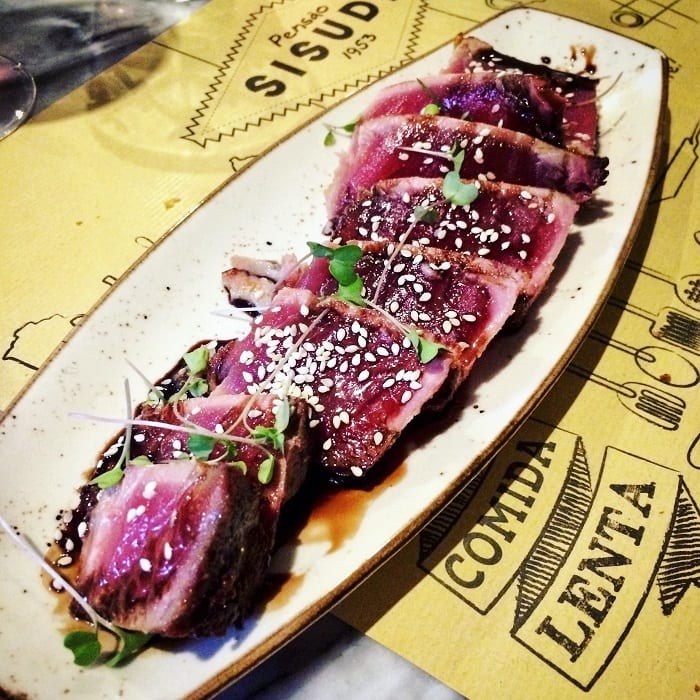 On the second night James took us to Adega Vadia, a cosy restaurant famed for its regular Fado nights. There was no traditional Portuguese music on the evening we were there but the atmosphere was still buzzing. Food was tapas style and we chose a mixture of sharing dishes including prawns and pork ribs. I had a local G&T which went down a treat.

A long sleep in the comfiest bed of the holiday, followed by another exceptional vegetarian breakfast the next day. We were rested and well-fed thanks to the hospitality of James and Aasta. We would be heading to Sintra, on the final part of our Inntravel trail, Palaces and Pathways of Sintra. The pathways had been incredible but the palaces, some of which we glimpsed in the far distance on our walks, were about to bewitch us. 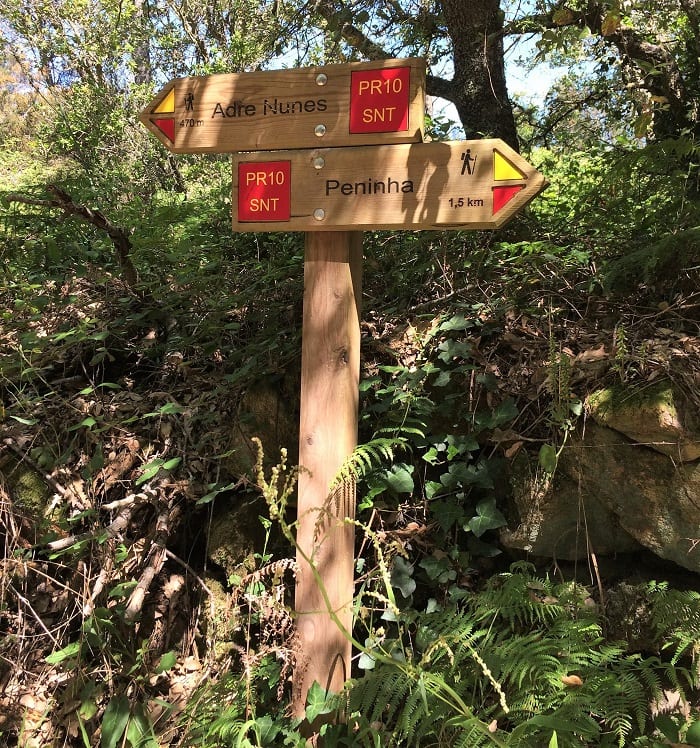