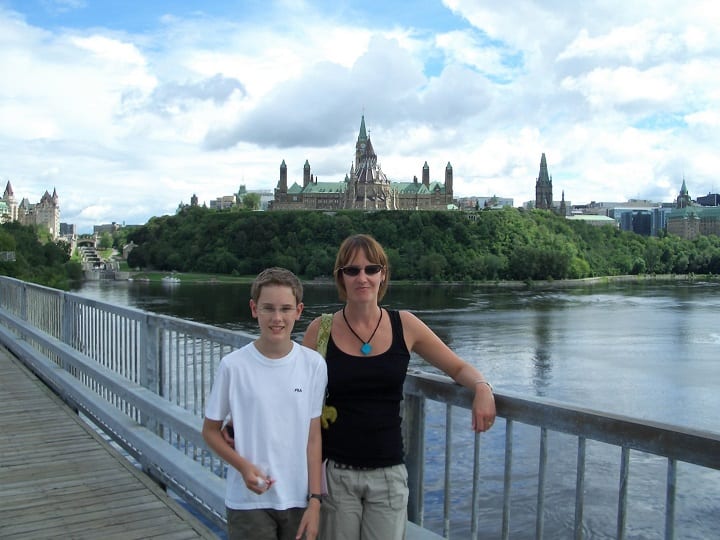 I’m sure it was an oversight that the Duke and Duchess of Cambridge neglected to seek my advice before their tour of Canada. However, I am a generous woman and I have decided to share with them my unsurpassed knowledge  of some of the cities they will be visiting, based on a two-week fly-drive in 2008.

William and Kate’s first stop will be the capital, Ottawa, on Thursday 30 June. Our drive to Ottawa was via the scenic route along Highway 60 through part of the Algonquin National Park. This national park is part of the Nipissing District of Ontario. It might have been “Ni pissing” for them but I remember needing to stop fairly frequently after an excess of coffee at breakfast.

The royal couple should be warned that this is bear country and I told the boys at the time that if you come across a brown bear you should stay still and with a black bear you should run away. But then I couldn’t remember whether that was the right way round. However I was more worried about some of the health hazards you could encounter when you’re in the back country. It said in my book you should be careful not to get “beaver fever”; Wills and Kate, take note.

What else did I glean from my guide-book reading at the time? In 1864 Queen Victoria had to decide which town should become the capital of Canada. Legend has it she picked Ottawa because of a watercolour painting she admired of the countryside outside the city. A more likely reason is its position between the English and French populations. Another gem was that Ottawa, although the capital of Canada, has been dubbed one of the dullest cities in North America. I have to disagree. Ottawa is a lovely city: a mix of London and Edinburgh with some very British parliament buildings.

Just like in London they have a Changing of the Guard ceremony on Parliament Hill.  It takes place at 10am and I remember on our first morning in the city we were grabbing a very quick breakfast at 9.30am when, in the distance, through the window, we could see the pipes and drums marching past the hotel.  If only we’d waited, we could have just stood at the front door of the hotel, or even hung out of the bedroom window to see the spectacle. But, toast in hand, we’d missed it. To add to our irritation, by 10.30 we eventually set out, walking towards the river, we heard the pipes somewhere behind us. Of course, the soldiers were marching back again, past the hotel we’d just left. So we’d missed them…twice! 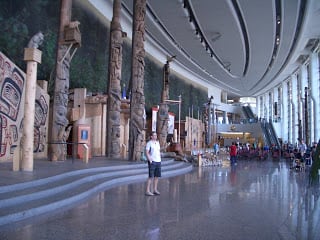 I have fond memories of this city, it was so clean, plenty of drinking fountains everywhere, easy to walk along the river without having to dodge the traffic. We walked over the river which took us from the English city of Ottawa to the French city of Gatineau, the border between the states of Ontario and Quebec. We spent the rest of the morning at the Museum of Civilisation in Gatineau, only because we had free tickets for it as part of our fly-drive package. So glad we did. The museum was fantastic, a beautiful building itself and plenty of loos on every floor, all sparkling clean. That’s how a museum should be. A high loo ratio. We learned all about the history of Canada from the first settlers onwards and whereas in other museums there’s a tendency to glaze over after a while, this place was spot-on with how to amuse all ages.

It was on the way back over the river that one of the most memorable incidents of our holiday took place. Apologies if people have read this before but I can’t write about Ottawa without plucking this out of the archives. 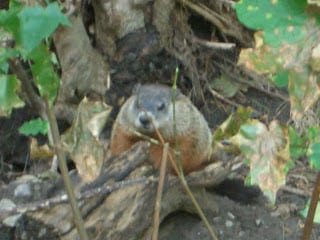 It was while we were ambling along in Ottawa that we kept seeing little furry animals popping out of holes near the river bank and along the canal. They were quite chubby, with reddish brown fur and probably measured about 2 ft in length. We sat at a cafe by the canal trying to decide what they were. In the end I plucked up the courage to go inside to ask the cashier.

“Can you tell me what the little furry animals are outside?”

“Sure”, he replied, “They’re groundhogs”

“Yup, that’s right, we have hundreds of them round here”.

Who’d have thought it! I was very excited when I returned to the boys to tell them. We gave Rory a quick synopsis of the film: Bill Murray gets stuck in time during Groundhog Day and has to replay the day over and over again.

Dougie then smiled wickedly and said,

“Go back into the cafe and ask him again”.