Home  >  Blog  >  Buckfast Abbey is a surprising delight in Devon 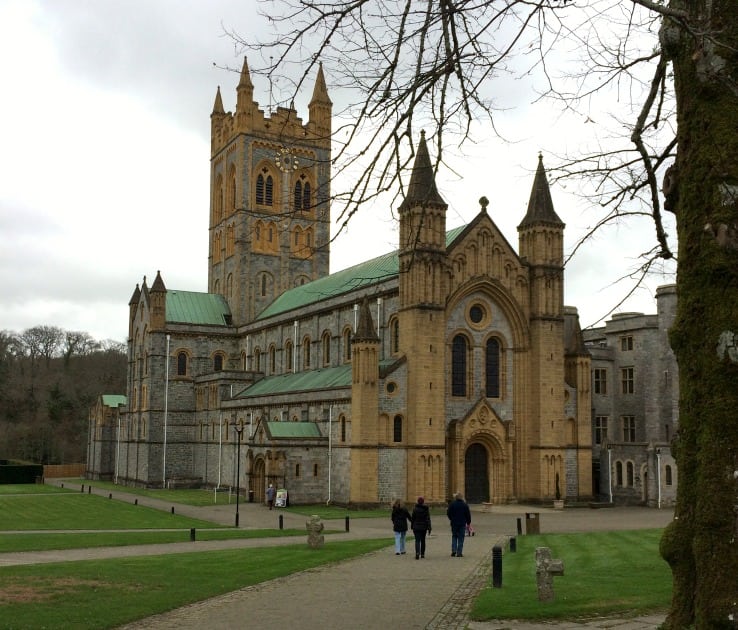 Having a son at university in Exeter has opened up a whole new area of the country for us to explore. Rory is always agreeable to a mid-term visit from Mum and Dad. I’d like to think he is as excited as we are when a parental stay is looming but I suspect it’s because he is taken out for meals and can keep his wallet safely tucked away.

Over the last few years we have bundled him into the car to go fossil hunting in Lyme Regis, shopping in Dartmouth and fish’n’chip chomping in Torquay. On our last visit to see our lad, to coincide with his 21st birthday (I know, how did that happen?)  I suggested Buckfast Abbey. Dougie was a little dubious as his overriding image of Buckfast is the fortified, high-caffeine wine which has unfortunately become associated with anti-social behaviour, particularly in his native Scotland. Taking our boy to get stocked up on ‘Buckie’ didn’t seem like a sensible idea.

He soon changed his mind when we arrived. The abbey is located in an idyllic setting on the River Dart, and only a short drive from Exeter. With pretty gardens, a bookshop and a smart café and conference facilities, this was a world away from what Dougie was expecting. We had passed signs to Buckfast Abbey several times on our day trips with Rory and hadn’t appreciated what a lovely place it was, just off the A38.

The history of the abbey is fascinating. It was originally founded as a Benedictine monastery in 1018 in the reign of King Cnut and was small and unprosperous. There were many changes over the years. It was rebuilt in stone in 1147 when it became a Cistercian abbey. When Henry VIII dissolved the monastery in 1539, all its gold and silver was sent to the Tower of London. The land became the property of the king and the abbey was left to decay. It was over 300 years before Buckfast became a monastery again, the site changing hands many times.

In 1882 the owner at the time, Dr James Gale, was keen to sell the property to a religious order so put an advert in The Tablet. This was seen by a group of monks from the community of La Pierre-qui-vire in France who had been driven from their homeland because of the anti-clerical laws enacted there. They had taken shelter in England before being loaned a property outside Dublin in Ireland. Having spotted the advert, they took out a lease on the property and monks returned to Buckfast six weeks alter.

Restoration began under the leadership of the new abbot, Boniface Natter. Natter died in a shipwreck in 1906 but his successor, Anscar Vonier, who survived, made it his mission to rebuild the abbey church from scratch. With only £5 in funds, a borrowed horse and cart and a load of stone, work began. Vonier sent one of the brothers to France to learn about masonry. For the next 32 years the abbey was slowly constructed, with a maximum of six monks working on it at a time. Vonier died in 1938 just as all the work was completed. 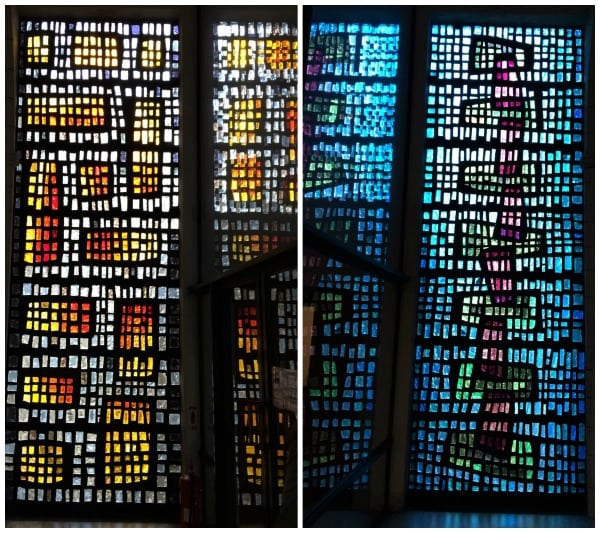 The interior of the abbey was the focus of more work in the following years with one monk, Dom Charles Norris, who had trained at the Royal College of Art, primarily responsible for the beautiful stained glass windows. It was the interior that we were most surprised to see, not just because of the beautiful windows, but the lightness inside, due to the white stone work. 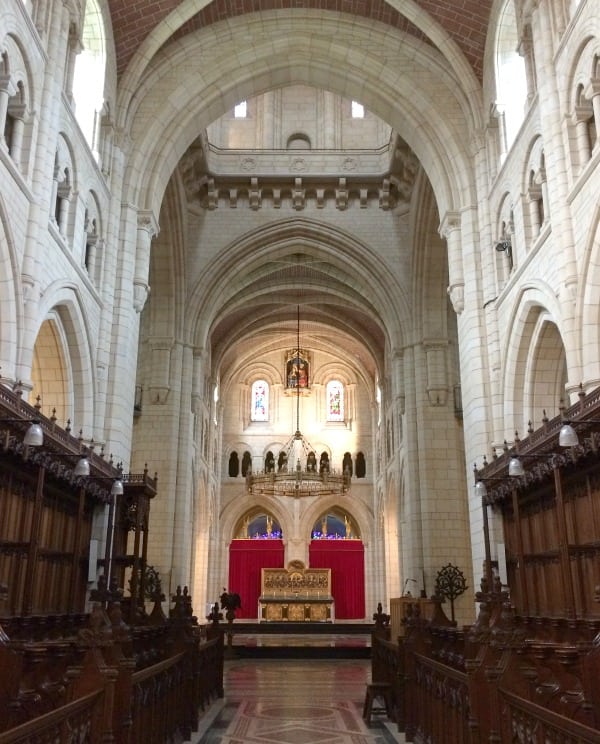 The gardens were also worth a look. There is a sensory garden and a lavender garden. I was also intrigued by the medicinal section, with plants such as feverfew for headaches and agrimony for inflamed gums and sore throats. Other plants had household uses such as meadowsweet used as a dye and alecost to preserve ale before the use of hops. Some poisonous plants can also be seen including monkshood which was used as an arrow-tip poison and a death drink for convicted criminals.

What are the origins of Buckfast wine?

The French monks created Buckfast wine in the 1890s using a French recipe, and it has become an important source of income for the monastery. Millions have been reinvested in the local economy and hydro-electric power has been recently introduced, keeping the interior of this striking church warm and welcoming.

Of course we had to visit the monastic shop to see what other treats were on offer. There are products from many monasteries across Europe and beyond so we had the choice of jam, honey, wine and several varieties of beer. We did buy a selection of interesting beers plus, of course, a couple of bottles of Buckie. I really liked it – it tasted a little like port, ideal for a nightcap. I’ve been told it makes a fabulous alternative to Pimms, mixed with lemonade in the summer. Now that sounds very civilised. Start the day with a Buckfast rather than a Bucks Fizz? All it needs is a little marketing makeover and I think they could find a whole new client base for their product. 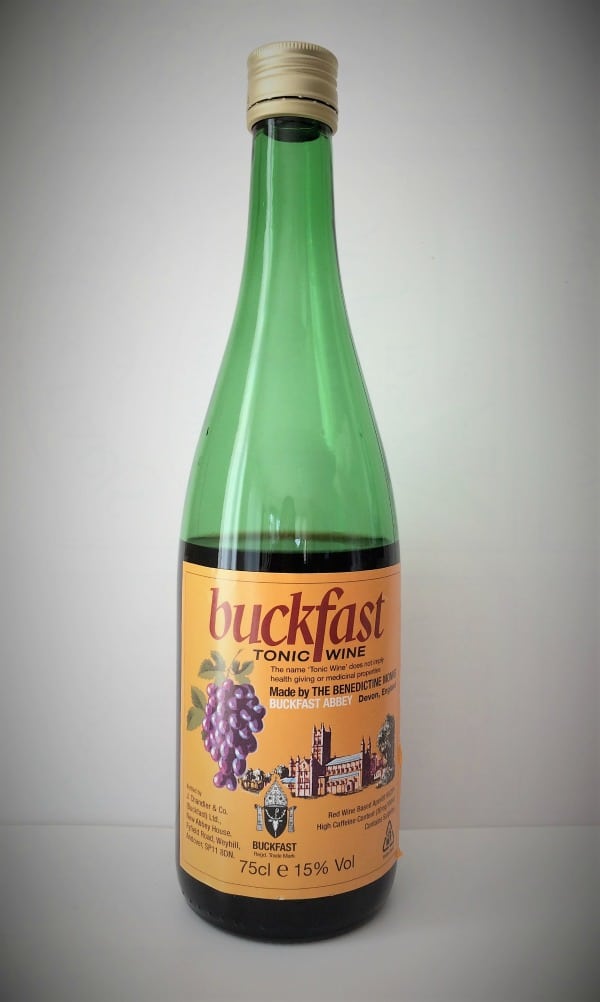 2018 will be a special year for the abbey as they prepare for their 1000 year anniversary. Visitors will be welcome as they always are, with no charge either to visit the abbey, its gardens or even for car parking. I rather like this quote taken from the website, which sums up the appeal of this very special place.

“Benedictine spirituality at Buckfast Abbey is firmly rooted. It is not swept together from all sorts of spiritual traditions; it offers a measured approach, it does not make haste; it contains nothing mysterious or esoteric; it does not focus on the spiritual quest of any individual, but on the growth of the person living in a community – whether religious or secular.”