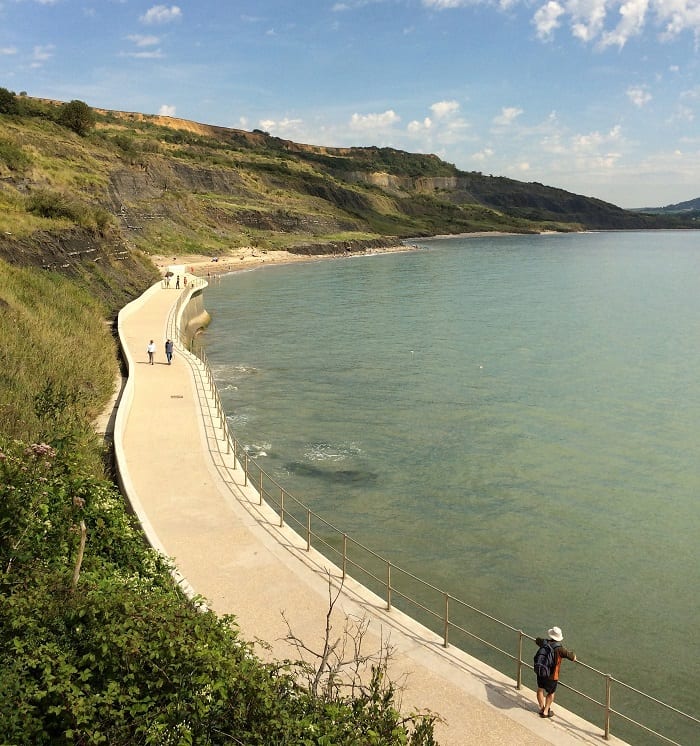 After a drizzly but delightful day in Dartmouth, (overkill on the alliteration there, sorry) our second day in the south west proved even more dismal, weather-wise. Undeterred, we scooped the teenage students from their slumber and drove them a few miles south of Exeter to Topsham.

We had visited Topsham before when the kiddies had booked us a table at a local restaurant, The Galley. They had been desperate to try out it out, because of its rave reviews, but had waited patiently until we could go with them…and pay. It turned out to be what food critics describe as ‘historic’.

A daytime visit to the little town proved just as memorable, despite the rain. We darted in and out of a series of fabulous little independent shops, seeking out treasures, working our way down the high street until we reached Route 2, which describes itself as an eco-cafe and apparently, as I discovered later, is one of the top 10 cycling cafes in the UK (according to The Guardian) It’s what you might call a relaxed (scruffy?) establishment which served fantastic food. The teens wolfed down gumbo and a Cajun chicken burger whilst Dougie and I, still full from breakfast, decided on the ridiculous but rather sublime idea of lunchtime scones – with cream and jam.

We spent the afternoon at Dart’s Farm, which sells everything from champagne flutes to cheese and cider. Dougie and I bought the flutes and Rory and Juliana filled a trolley of goodies for the kitchen cupboards of their new flat.

The following day’s forecast was very encouraging. The sun was going to make an appearance but we would stand a better chance of catching it if we travelled west. So, waking up to blue skies, we headed for Lyme Regis. Having had success with Dartmouth’s efficient Park & Ride system, we decided to do the same in Lyme. A large field and a very British queue awaited us. The bus appeared and was barely bigger than a mini-bus so the queue remained.

Not the most patient people, we gave up pretty swiftly and drove further into town. The car parks were heaving, nothing was moving, the swearing from within the car was increasing and it seemed our visit might be doomed. However, on coming out of the other side of the town we chanced upon a vast car park, Charmouth Road. £2 all day. It had spaces and was linked to a brand new walkway which led down to the beach and round to Lyme itself. It was perfect.

Reaching the beaches at Lyme Regis we were able to see where everyone from the cars had gone. The pebble beach wasn’t too bad but the tiny patch of sandy beach was packed. Dads were hammering in windbreaks, mums were in charge of cool boxes and kids were carrying buckets, spades and assorted inflated animals. To top it all, this was the weekend of the Lyme Folk Festival so there were several groups of Morris dancers on the prom, with drums thumping and bells ringing. The following photo will give you an idea. Looks like a ‘Where’s Wally’ picture, doesn’t it?

A few yards further on was Lyme Regis’ majestic Cobb, made famous by John Fowles book, The French Lieutenant’s Woman. The crowds had dissipated so I felt a little like Meryl Streep, walking along the top – though, as it was rather hot, it didn’t quite have that wild, desolate feel about it.

Like Louisa Musgrove in Jane Austen’s Persuasion, I climbed down from the Cobb via some precarious steps, named Granny’s Teeth. Unlike Louisa, I didn’t fall off and suffer concussion.

Wandering past the crowds again, we looked for somewhere to stop for a drink and a bite to eat. Remembering how in Dartmouth we had success with the local arts centre, we sought refuge in the Mermaid Theatre. The theatre bar was empty and we thought it might be closed but we were made very welcome, encouraged to sit on the balcony outside and contribute whatever we felt was right for the chocolate brownies which had been made by local supporters of the theatre. We couldn’t believe our luck with the view over the bay, the tranquillity and the delicious cakes.

To end the afternoon, we returned to Church Cliffs to search for fossils. Next time we should really think ahead and book a session with a professional guide. Nevertheless, it was good to just poke about on the shore and I did find part of an ammonite.

An hour later the clouds darkened and we could hear dull, booming thuds across the bay. Had T- Rex wakened from his slumber because of our meddling in the rocks at the Jurassic cliffs or was it the drums from the Morris troupe calling the team together for one last jig? Neither. It was thunder and we had a very quick sprint back up the steps to our car before the torrential rain came down just as we shut the doors. Thankfully we weren’t waiting at the other side of town for a tiny bus to take us back to a field.

Sometimes things just work out perfectly, especially when the day ends having a great tapas meal in Exeter with my two favourite boys: 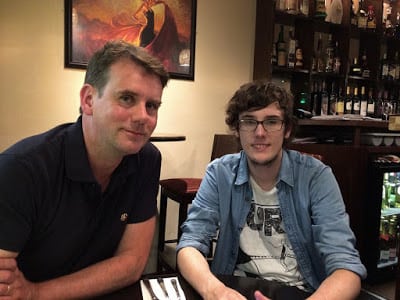 More photos from the day: