Home  >  Blog • Review  >  A taste of the estuary at Lympstone Manor

The end of an era is fast-approaching. Rory now has a degree in politics from Exeter University and our three years of visiting him will end next month with his graduation ceremony. I’m not sad about saying goodbye to the long slog up and down the M5 but I do feel wistful about the change that’s about to unfold.

Ever since we first visited the city whilst Rory was in Sixth Form, we have fallen in love with Exeter and its surrounds. We’ve used it as a base to explore Devon and nearby Dorset and Somerset and we’ve visited a number of hotels in the city centre, grabbing last-minute bargains for every end-of-year house move and mid-term catch-ups.

Our last drive for the parental pickup coincided with our wedding anniversary so we decided to treat ourselves to a luxurious night away in Lympstone Manor before scooping up Number One Son and taking him home with us. The yin and yang of the weekend was apparent – being treated like royalty in the elegant surroundings of this fabulous hotel followed by a day shifting bin bags of clothes from a non-too-fragrant student house.

Lympstone Manor has just opened and is the realisation of a dream for chef/patron Michael Caines MBE. Michael was born in Exeter in 1969 and was adopted into a large family, his mother the inspiration for his love of cooking. He worked for some time under the tutelage of Raymond Blanc at Le Manoir aux Quat’Saisons before honing his skills even further in France. In 1994 he became Head Chef at Gidleigh Park in Devon. Just two months in, Michael was in a horrific car accident and lost his right arm but within a fortnight he was back at work, even more determined to succeed. And succeed he did, gaining his 2 Michelin stars in 1999. 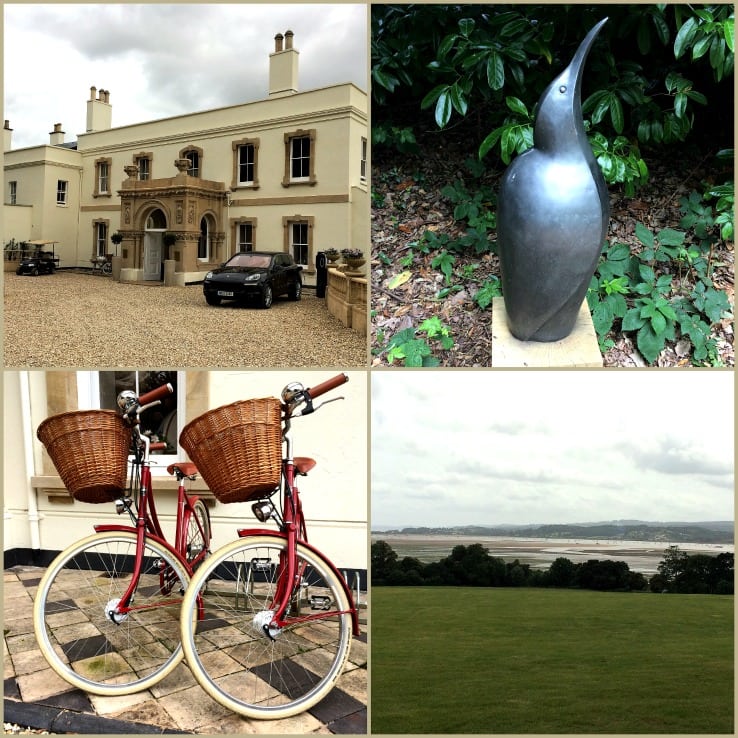 As a hotelier, Michael Caines’ vision for Lympstone Manor is ‘country house hospitality for the 21st century’. The historic Grade II listed Georgian Manor is in an enviable location, overlooking the estuary of the River Exe. It bodes well for the vineyard Michael and his team plan to create, making the most of the southwest facing slopes of the grounds. At the moment it is the perfect spot for taking a turn in the gardens, particularly the Ladies’ Walk leading down to the foreshore. It feels very Jane Austen to leave the confines of the honey-coloured manor house to take the air. As Dougie and I strolled around the estate,  spotting the carefully positioned works of art which guests can purchase, I half expected a dripping Mr Darcy to appear from the water. 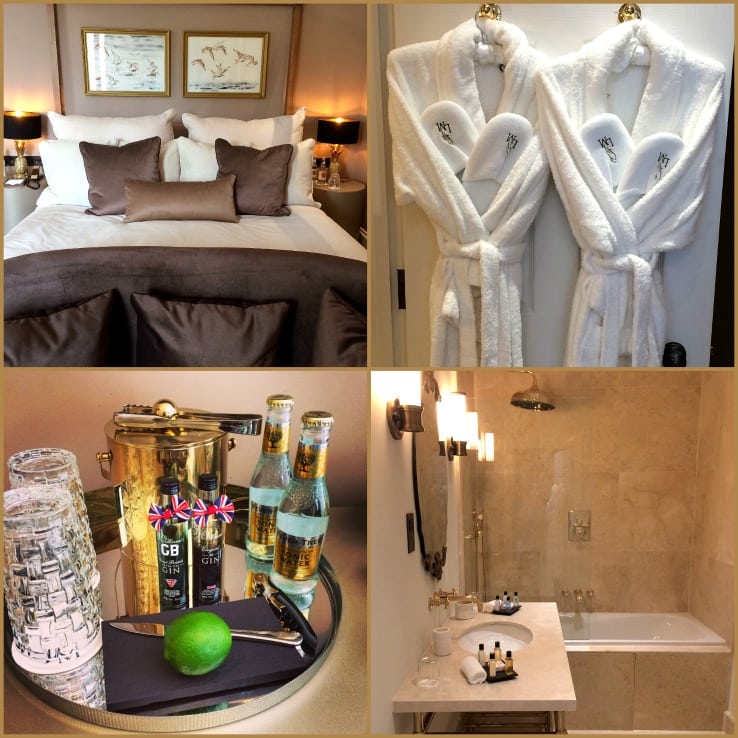 If your interests are less Lizzie Bennett and more Lizzie Armitstead, Lympstone Manor provides stylish Pashley bicycles for guests. It’s these touches that reflect the vision of old-fashioned glamour with a contemporary twist. Public rooms and bedrooms are plush and extravagant, in shades of mink and oyster with flashes of duck-egg blue and gold finishes. But alongside the cushions and chandeliers are GHD hairdryers and straighteners. A Nespresso machine is housed in the wardrobe whilst a cool gin tray, complete with fresh lime and Fever Tree tonics, graces the chest of drawers. His ‘n’ hers L’Occitane toiletries are a welcome sight in the opulent bathrooms which all have proper bathtubs and huge gold-coloured rainshower heads. The towels, bathrobes and slippers are so thick they should be in the corner wearing a dunce’s cap.

Sink into the sumptuousness of the sofas in the drawing room for a civilised afternoon tea. Or prop up the striking bar, constructed with copper sheeting, and have a gander at the whisky collection. Lacing its way through the old and the new is a bird theme. Watercolour paintings by local artist Rachel Toll, can be found in the bedrooms and public rooms and she designed the wallpaper that graces the staircase and reception areas. Each of the 21 rooms is named after one of the avian locals. 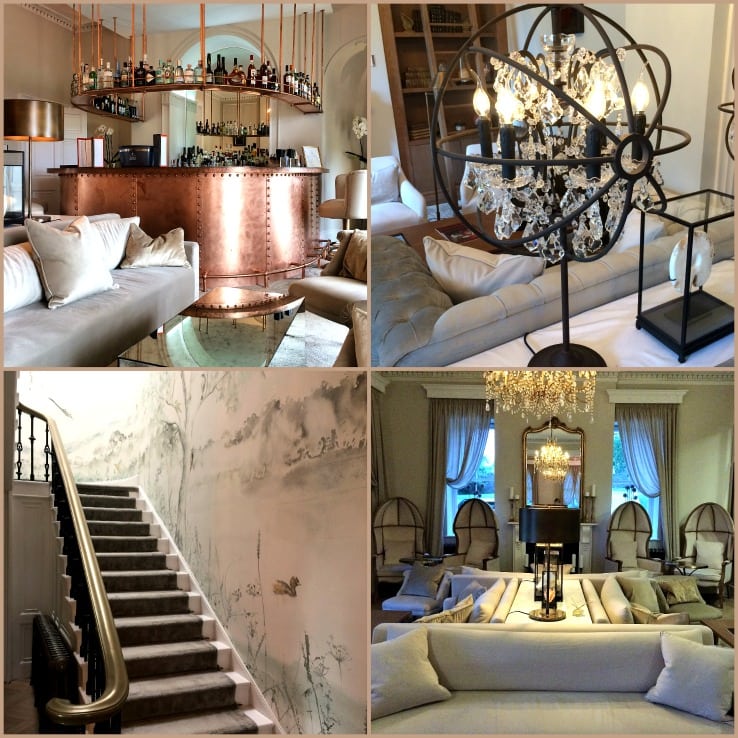 How was the food? Michael Caines’ cuisine was sensational. Dougie and I chose the Taste of the Estuary tasting menu. No clever gimmicks, just exquisite food, sourced locally, cooked to perfection and displayed with aplomb. My favourite dish kept changing as the meal progressed, from the lobster with mango and cardamom vinaigrette to the lemon sole with asparagus and finally the coconut panna cotta with passion fruit sorbet. We took advice from the experienced sommelier, as we needed to pick the right wine to do all these flavours justice. With careful questioning about our tastes and the menu, he suggested a fruity German Riesling which would never have been on our radar. The petits fours with our coffee were other worldly; they defied gravity despite the depth of their wicked flavours. 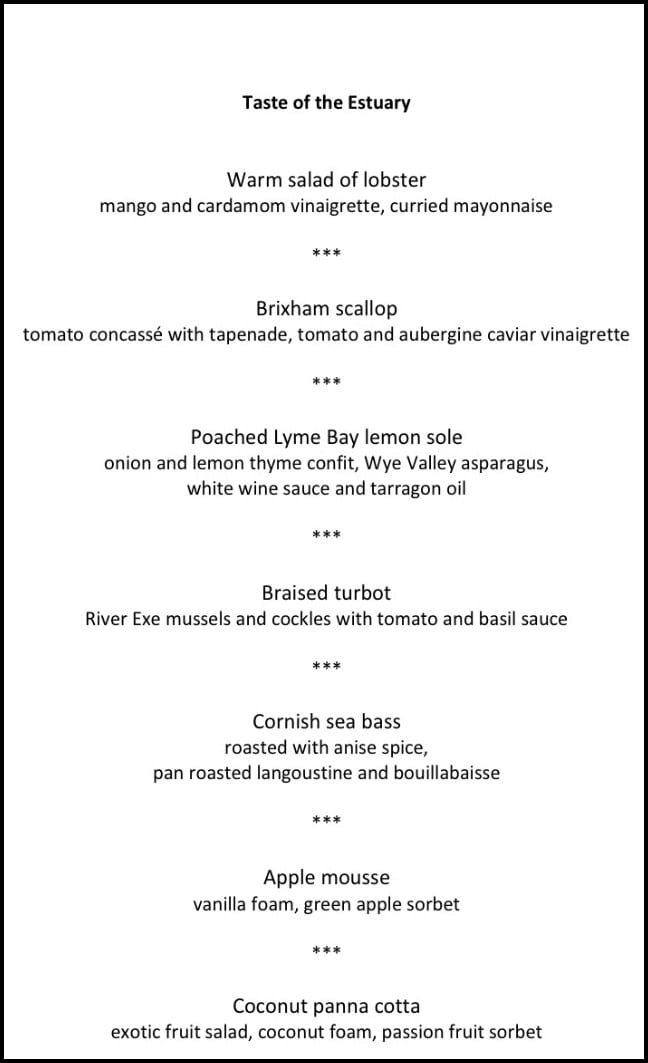 Breakfast the following morning was also a heavenly experience. The Golden Spurtle Award for perfect porridge is not something I hand out lightly but I have to say the combination of maple syrup and banana as well as the creaminess true scots would baulk at, puts Lympstone Manor in first place. Dougie’s Full English wasn’t meddled with but each element was of the finest quality.

You’ll notice there are no photos of my dinner or breakfast. I just couldn’t bring myself to break the spell of Lympstone Manor while we were devouring such sublime food.  I wanted to return to a bygone age when the taste of good food lingered on the tongue and in the memory, not on Instagram.

Was there a hint of pretension in all this lavishness ? Not at all. Service was exemplary throughout but it wasn’t po-faced. The waiters and waitresses glowed with pride as we expressed our delight with each dish, the receptionists chatted about university term dates, General Manager Scott Andrews welcomed us with a warm handshake and the man himself, Michael Caines, was there to greet us as we carried our champagne aperitif into the dining room.

I’m finding it hard to imagine our association with Exeter is about to come to an end. To hang on to the magic of Devon a little longer, we’ve booked Lympstone Manor for Rory’s graduation lunch. It’s only right our boy should have a little taste of luxury for his celebrations as we have him to thank for opening up a beautiful part of the country to explore over the last few years. I have a feeling Lympstone Manor might well turn out to be a siren of the south west, tempting us back.