If you’re looking for a day trip that involves as many forms of transport as possible, try this jaunt we took from Hiroshima to Miyajima island in Japan. We took a plane from Tokyo to Hiroshima, then a tram, train and ferry to the island. Two cable cars transported us to the top of Miyajima’s Mt Misen.

A UNESCO World Heritage Site, Miyajima, officially known as Itsukushima, is probably the most popular day trip from Hiroshima. If you’ve come to see Hiroshima and the Peace Memorial Park, another day seeing this culturally significant, sacred island should definitely be on your itinerary.

How to get to Miyajima Island from Hiroshima

There are a number of options for getting to Miyajima. There’s a long but cheap ride on the streetcar (tram) to the ferry terminal; a relaxing but more expensive cruise from the Peace Memorial Park directly to the island. Or there’s the tram/train/ferry mixture which we chose. 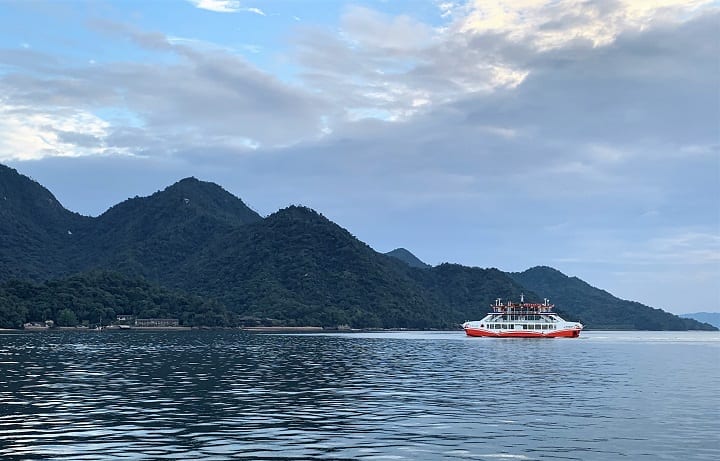 From our hotel in the centre of Hiroshima we hopped on the Number 7 tram to Yokogawa Station then changed to the JR Sanyo train line to Miyajima-guchi. We picked up a ferry from here to travel the short distance (10 minutes) to Miyajima. From door to door, it was just under 90 minutes.

No sooner had we set foot on Miyajima than the island’s residents came to welcome us. Wild deer populate the island and are so used to being around people, they will make a beeline for anyone with food. In fact, they will pester you for anything they can reach with their mouths. I watched one artful dodger pickpocket a pamphlet from one man’s trousers without him noticing. 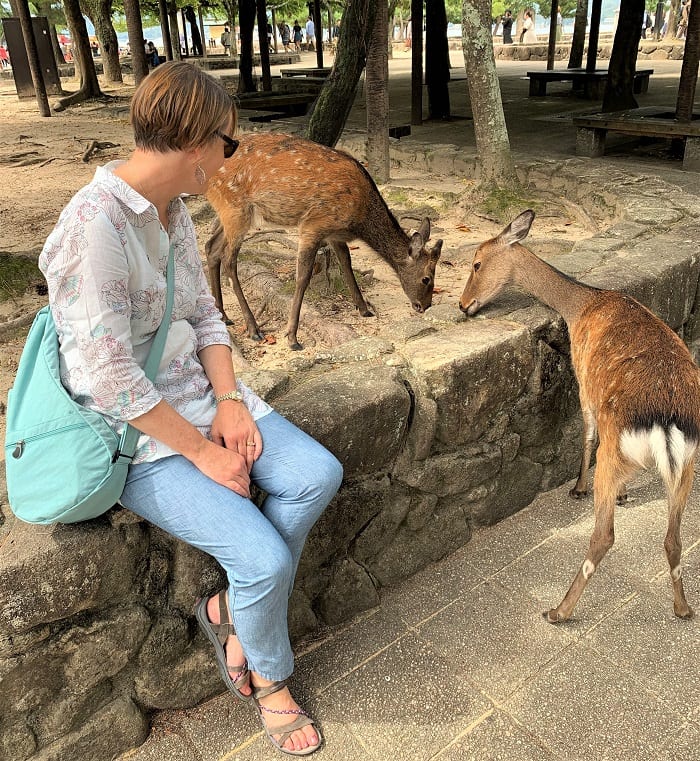 There’s an obvious walking route as you alight from the ferry. After meeting our deer friends, we followed the path through to the Omotesando Shopping Arcade. This covered walkway is full of shops selling everything from lucky cats to ornamental fans. It’s also a great place for trying the traditional sweet snack of the island: momiji. These maple leaf-shaped cakes are usually filled with red bean paste and are delicious. We found one shop where you could see the cakes being made. We chose freshly-baked momiji (one filled with chocolate, one with custard). Each warm momiji came with a free cup of green tea or water and only cost 100 yen. That’s about 70p.

Most visitors flock to Miyajima to see the magnificent O-Torii gate which stands in shallow waters in the bay in front of the shrine. A brief search on the internet will show you hundreds of images of this iconic monument.  If the photos have been taken in recent months, however, like my photo below, you will see those glorious gates wrapped up in scaffolding and plastic. The gates are being renovated in time for the Olympics in the summer of 2020. Hmm – nobody thought it might be handy sprucing them up for the Rugby World Cup fans?

The Itsukushima shrine itself is still worthy of a photograph or two, although canny visitors try and combine their trip with high tide, so the beautiful vermillion buildings can be seen shimmering against the water, rather than mud. We weren’t canny visitors.

Miyajima island is home to several other shrines and temples but if you’re just here for the day you probably won’t have time to see them all. Far better to focus on one and experience fully its spirituality. The Daisho-in temple is exquisite. We chanced on it by accident, taking a path off the main drag. The crowds dispersed and the stunning temple shared its treasures with just a few Miyajima explorers. 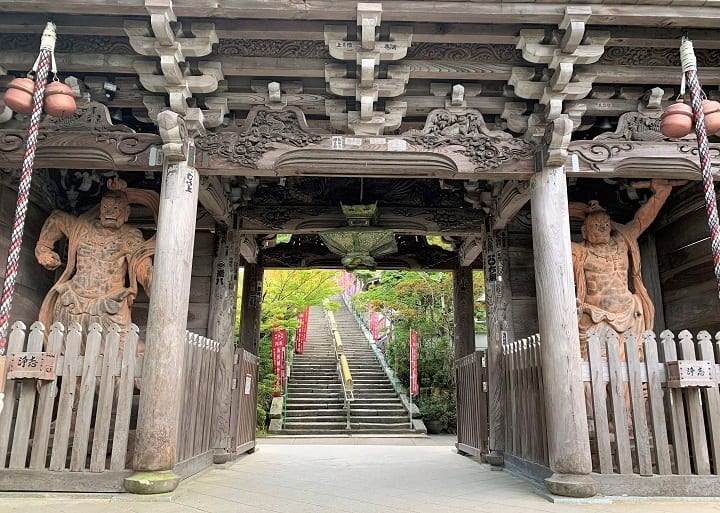 The temple precinct includes a variety of buildings from tea ceremony rooms to prayer halls. As we approached the steps to the temple we could see hundreds of little statues, all wearing natty knitted hats, bestowed on them by their followers as a mark of respect. These Rakan statues represent the 500 Shaka Nyorai disciples. All their expressions are unique, making them rather adorable.

Another highpoint of the visit was the Henjyokutsu cave, a dimly-lit room containing the principal Buddhist icons of the 88 temples of the Shikoku pilgrimage and bowls of sand from each of the locations. Worshippers believe they are given the same blessings as those who complete the full pilgrimage.

We stayed at Daisho-in temple for a while, seeking our fortune by purchasing omikuji strips hidden in little novelty ornaments. Dougie chose a Daruma doll and I picked a little Miyajima deer. Thankfully both our fortunes were very good that day.

Taking the ropeway to Mt Misen

There are a few different paths you can take if you wish to hike up to the top of Mount Misen, the highest point on the island. It was a very hot, humid day when we visited, so we opted to take the cable cars most of the way. It’s a lovely walk through Momijidani Park (maple leaf valley) to reach the ropeway station. We took the two cars up to the viewing point but that still left us with a 30 minute steep walk to the very peak of Mt Misen and its observatory. 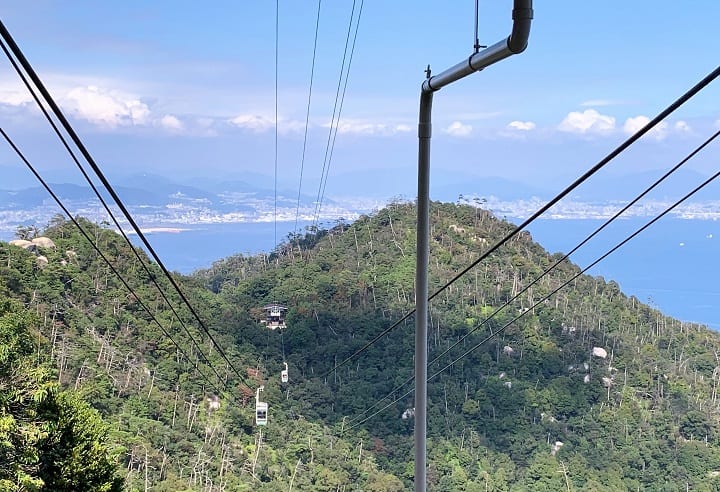 After walking a lot longer than 30 minutes, we eventually called it a day at the buildings associated with Kobo Daishi, a great Buddhist priest. One of these was the Reikado Hall which houses the eternal flame. The fire has burned for 1200 years and was used to light the Flame of Peace in the Hiroshima Peace Memorial Park.

I’m told it wasn’t much further to the very top but we had already seen the wonderful views across the Seto Inland Sea so, with some regret, we turned back. I’m sure everyone who has been to the Miyajima Observatory will be shaking their heads in disbelief but when you’re exhausted, with the wrong footwear, sometimes you just have to stop.

Why we loved Miyajima

Miyajima is only a tiny island but it contains so many astonishing sights. If I had to pick a favourite day of our holiday to Japan, I think this might just have the edge over nearly a month of other brilliant days. Much of our holiday was spent in busy cities such as Tokyo and Osaka so this idyllic island made a refreshing change to our itinerary. Despite its obvious popularity, there is enough space to escape and find peace along the shore, in the forested park and at the top of the mountain.

As for the different forms of transport, there was one more method we could have chosen on Miyajima island; the rickshaw. We decided to just walk leisurely along the shore to the ferry station and give this hardworking chap a break… 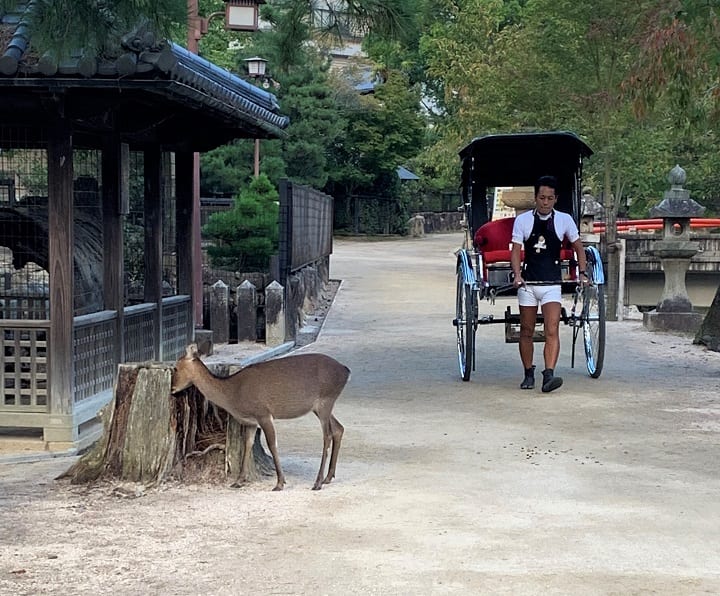