Let me start by offering a piece of advice. If your child is in their final year at university, find out the graduation dates and book yourself a hotel room for the whole week. Once the date is finalised, cancel the days you don’t need. I say this from experience, having left our hotel booking for Rory’s graduation until the specific timings had been published, only to discover that all the other parents had already booked up the whole of Exeter. What was left behind was either some distance from the centre or available at an inflated price.

Every cloud has a silver lining, however, as I managed to find a room at the Premier Inn, Exeter City Centre hotel and it proved to be an excellent choice. We’ve had a few stays at Premier Inns in recent years and have been very impressed with the standards of cleanliness and comfort. This particular hotel is in a central and very attractive part of the city, Southernhay Gardens. The reception is on the first floor, so the entrance from the street doesn’t have much appeal, but our room provided us with everything we needed for our stay: TV, comfy bed, free WiFi, kettle, soft white towels.

We often find that bathrooms let even the best hotels down – poor sealant or mould on the grouting. Dougie can often be seen picking muck out of extractor fans with a Swiss Army knife. Our bathroom at the Premier Inn, I’m delighted to report, was spotless: no muck removal necessary.

We deposited our son back at his flat and left him to organise the pick-up of his graduation robes/gown/mortar board. Later we met up with him at Comptoir Libanais, a great Lebanese restaurant which has a number of branches across the country. Between us we had mezze to share, I had a lamb tagine and the boys, if I remember rightly, had something burger-y with salad and lots of warm pitta bread.

Rory was keen to leave us to get on with other student matters which may have involved a pub or sleeping. Dougie and I, meanwhile, walked down to the quayside to search out a cocktail bar, Doctor Ink’s Curiosities, which had been recommended to me by my friend, Carolyne. It’s not easy to spot but it’s located in the Customs House so if you find that handsome building, you’re there. To make the most of this wonderful drinking establishment you have to allow yourself to be transported into the fantastic journeys of that rogue, Daedalus Ramssees Ink, known as The Doctor. 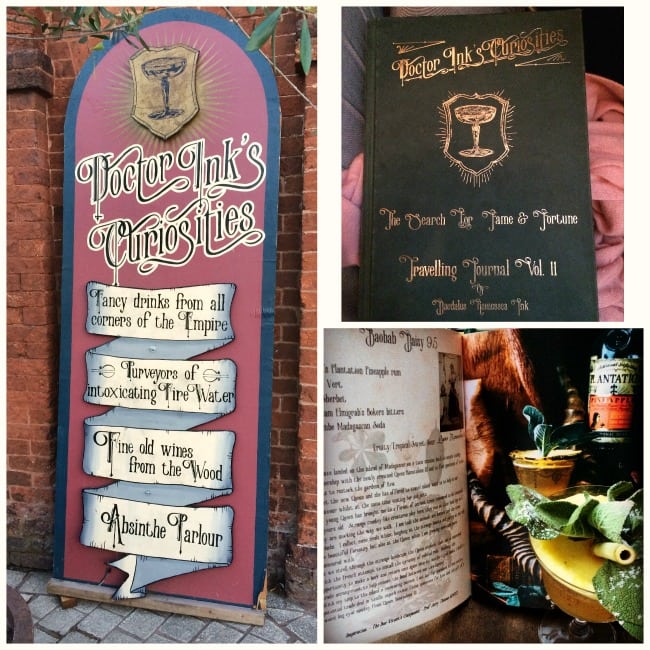 Each page of the drinks menu is a page in his journal, recounting his adventures across the empire. I chose Baobab Daisy, a concoction of rum, lime sherbet and Dr Adam Elmigrab’s Bokers Bitters. The cocktail arrives exactly as shown in the journal, mine sporting the same slice of pineapple, bamboo-type straw and engraved glass. Dougie’s Aquilam was a smooth mix of Eagle Rare 10 year old Bourbon and plum liqueur. The cocktails were delicious and the service quick, friendly and fun. Dougie was up for another but we’d had a long day and a graduation ceremony starting at 9am the next morning so we sadly called it a night.

The graduation ceremony was emotional. The tears started as soon as the music began and I sniffled for quite some time. As it was being recorded I decided to not even try grabbing a blurred photo of my boy and just clap madly instead. One of the honorary graduates, Philip Collins, a columnist in The Times and former speechwriter for Tony Blair, gave an excellent speech (naturally) to the politics graduands, advising them to read voraciously and write things down. That was the gist of it but I do wonder how many of the fidgety students, worrying about the impending walk across the stage, actually paid attention. I suspect, once it was all over, they were more ready to listen and I do hope so because the final words from the Chancellor, Paul Myners, delivered in a heartfelt and impassioned way, implored the young people in the hall to make a difference in the future. He told them not to be arrogant but to be compassionate, to appreciate the opportunities they have been given, think of others and the greater good.

The new graduates left the room to the lively strains of “The Liberty Bell” march by John Philip Sousa. Otherwise known as the theme tune to Monty Python’s Flying Circus, its rapid tempo made it the perfect choice for ensuring hundreds of people exit in the quickest time possible. Genius. 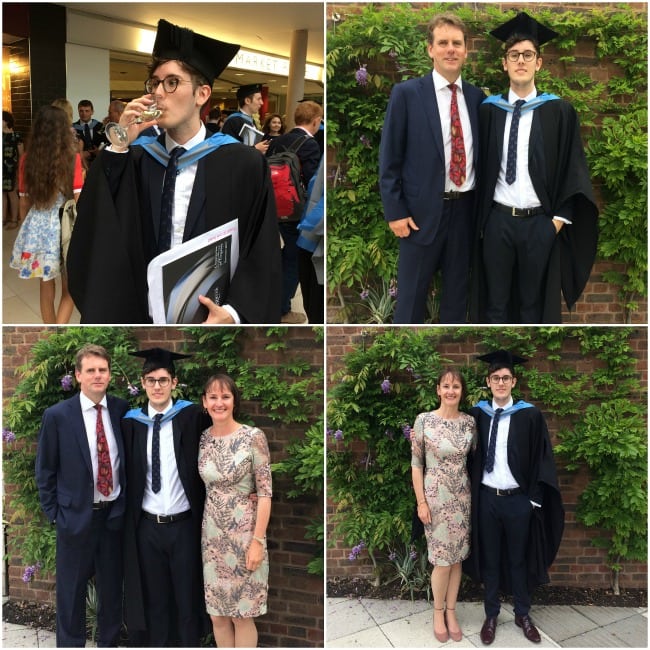 The following hour was a blur of photos, sparkling wine and cupcakes. It was a time for celebration and to reflect on three years which had been a journey not just for each student but for their families too. Exeter has been a second home for all of us. We may not have lived there with our son but the termly visits helped us become acquainted with this lovely city and even when I wasn’t physically there, my heart was always a temporary resident. 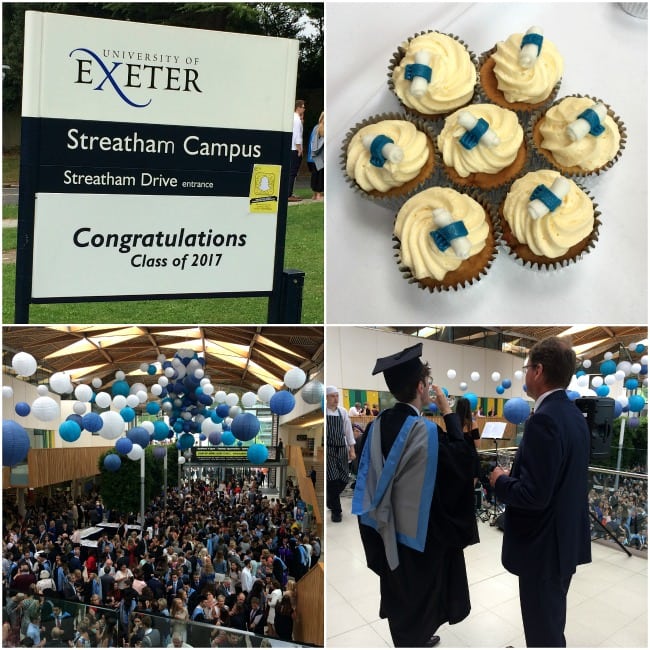 I’m pleased we’d decided to book somewhere special for lunch. We drove down towards Exmouth and treated the boy to a fancy meal at Lympstone Manor, where Dougie and I had spent a fabulous night just a few weeks before. It was the ideal way to unwind after the morning’s excitement. Everything was so relaxed and unhurried as we chatted over a sublime lunch involving lobster, Cornish hake and duck risotto. 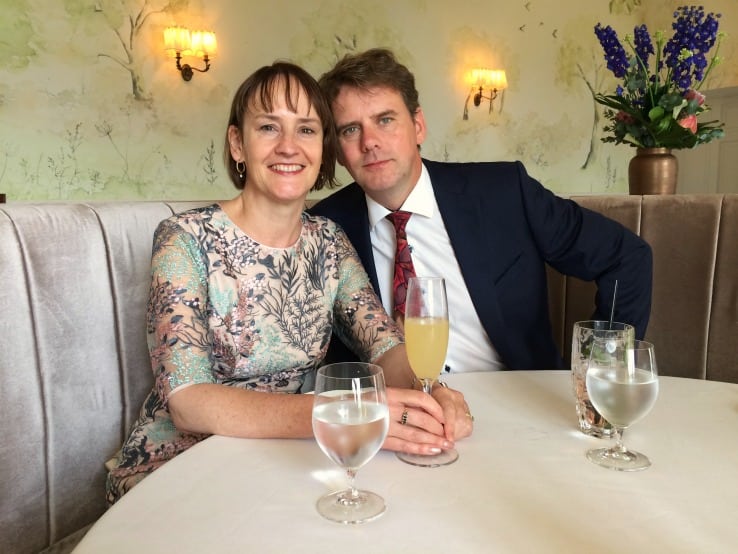 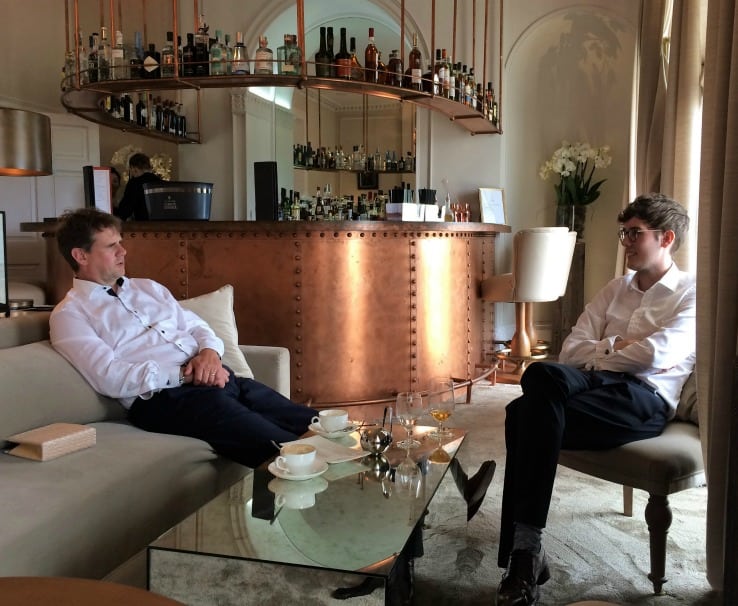 We drove back to Exeter and dropped Rory off again (another nap?) before Dougie and I took our last walk in the city. Back on the quayside, we bought a drink from Mango’s Café Bar and took shelter under their outdoor umbrellas as the rain eventually escaped the dark cloud canopy which had been threatening to explode all evening. A large number of Morris dancers had been enjoying a drink at the neighbouring pub, The Prospect Inn. Their entertainment began just as the rain arrived. Different groups, including, from my research since, the Glory of the West Morris, the Isambards Gasket Rats and the Otter Morris Dancers, ignored the downpour and sang, danced and played their hearts out to the quayside revellers. What a brilliant way to end our official association with the city!

The following day we had to do a final clean-up of Rory’s room and bravely emptied his portion of the communal fridge, then set off, with a completely full boot, to start the next stage of our graduation road trip. If any parents are sad at the thought of their teenage children soon wishing to disassociate themselves from family jaunts, take heart that our 21 year old was more than happy to accompany his old mum and dad on holiday. With the promise of relaxation, free WiFi and decent meals, Rory dropped the keys through the door of the letting agent, said goodbye to his home of the last three years and clambered into the car.