When Julie Andrews was singing Do-Re-Mi around the streets of Salzburg with the von Trapp children, kitted out in stylish curtain-chic, there may have been a drop of sun but I’m certain the mercury wasn’t pushing 40 degrees Celsius.

During our visit to Austria this last fortnight, we were engulfed in a heatwave which only dissipated the morning we left. Expecting warm temperatures of around the mid 20s mark, it was quite a shock to be hit with a wave of energy-sapping heat as soon as the plane doors opened. The black hire car took some time to cool down before we could drive half an hour from the airport at Klagenfurt to our apartment on the Ossiacher See. But the views of beautiful Carinthia, a region of Austria in the far south of the country, bordering Slovenia, more than made up for the initial discomfort.

The Apart Hotel Legendaer, in Steindorf, was just as we had imagined: clean, stylish, spacious but, sadly, lacking in air conditioning. I suppose they have no need for it here, as it caters for skiing holidays in the winter and very rarely has to deal with temperatures over 30 degrees in the summer. It did, however, have full shutters on all the windows and patio doors so as long as we were careful to keep them closed during the afternoon and evening when the sun came pounding through, it was bearable.

Each apartment was named after a famous person or family. Ours, you may remember, was named after Alma Mahler-Werfel, the Austrian socialite who had been married three times and had various lovers of note. Numerous photos and items linking to Ms M-W and her husbands (Gustav Mahler, architect Walter Gropius and novelist Franz Werfel) were placed in the apartment: a workable gramophone, a cabinet with photos, books and sheet music, copies of newspapers. A very unusual idea and, surprisingly, it worked and the items didn’t look out of place with the modern kitchen, wooden floors and clean lines of the apartment itself. 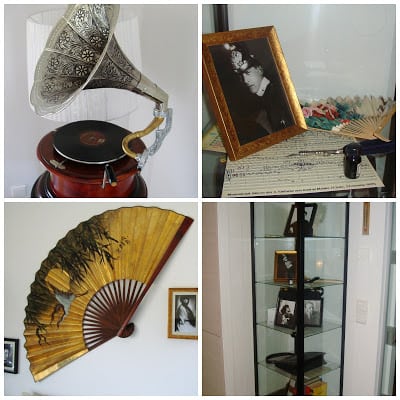 I was quite taken with our hostess, Alma. There was something rather comforting about seeing photographs of her and her children. I researched her while we were staying, learned more of her life, discovered that she had suffered much sadness with the death of two of her children. But I think the main reason she had an impact on me was because I thought she looked remarkably like my cousin, and fellow blogger, Toni (Expat Mum).