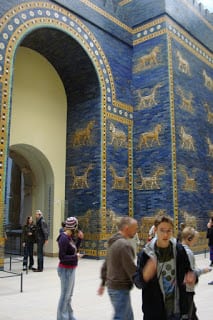 A day of culture for the family today and already teenage son, Rory, is pulling a face. Gone are the days when we could take him to museums and he would run around pulling levers and pushing buttons ad nauseam. Now he’s too cool to do anything “suitable for children” but nonetheless exudes an attitude of “Go on, impress me!”.
It’s my choice to go to the Pergamon museum as I think both husband and son will be impressed with the magnificent thumping-big chunks of ancient history: the Pergamon altar from 160 BC, the Roman Market Gate of Miletus and the jaw-dropping Ishtar Gate from ancient Babylon. Thankfully husband Dougie is suitably amazed and listens intently to the audioguide to all the details. Rory, however, shrugs a lot, fiddles with the buttons on his headphones and declares he’s hungry. So my vision of a couple of hours soaking up the atmosphere turns into an almighty gallop round the main features before tipping out onto the streets in search of lunch.
Lunch is found at a nearby Italian restaurant and is cheap and cheerful. Strange to find the laid-back attitude you would normally associate with an Italian restaurant replaced by exemplary German efficiency: we are processed, in and out, in half an hour.
Now that son is fed he cheers up a bit but digs his heels at yet more culture. So we make the brave decision to leave him in the hotel room; mobile phone, tube of Pringles and TV remote in hand, while we have an hour exploring on our own. On our return he is still in the same position and thankfully hasn’t emptied the mini-bar. 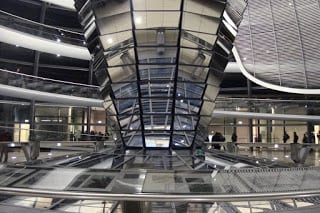 Steel and glass cupola in the Reichstag
In the evening we return to the Reichstag in our second attempt to go inside. Queue is a little shorter but still seems interminable. It’s well worth the wait. Sir Norman Foster’s fantastic dome makes us very proud that a British architect was instrumental in transforming such a famous German landmark. The good mood continues as our son thinks this place is “awesome” and we watch and smile as he excitedly runs up and down the ramps….