You’ll be pleased to know that the new downstairs loo was completed just before Christmas: the paint had only just dried when Mum arrived the day before Christmas Eve and pronounced new loo to be ‘just like a hotel’. I take that as a compliment but, truth be told, the loo had been a disgrace ever since the washing machine overflow pipe had leaked and lifted the vinyl flooring in our smallest room. For the last six months the loo has been floored with cardboard. Added to this, the flush on the loo has been particularly tricky, requiring a specific technique of one quick push followed by steady pressure. This takes time to master and poor Mum found it nigh-on impossible. So, you can imagine, she was delighted to find a push-button flush and a properly tiled floor.

Of course, the refurbishment of this room was a precursor to the main event: the creation of a new bathroom and en-suite.  This was to begin in the New Year. So it shouldn’t have come as a surprise when, at 9am on Wednesday 2 January, the bathroom people rang up to say our fitter would be with us in an hour to start on the main bathroom. Dougie had gone to work, Rory was fast asleep and I was still in my dressing gown. Had we done any clearing or sorting of the bathroom in preparation for their arrival? No. Did I think we had a few days to do this, as they probably wouldn’t be starting until Monday 7th? Yes. Did I panic? Yes.

I can’t quite believe it but, in under an hour, I managed to get showered, dressed, hoist Rory out of bed and then completely empty the bathroom. I found some old boxes and threw everything from all the cupboards and drawers into them – medicines, shampoos, a mountain of half-used Lynx cans, sheets and towels from the airing cupboard, a chair, ornaments from the window-sill, the whole lot was deposited in the spare room.  There were several boxes looking just like the one below: 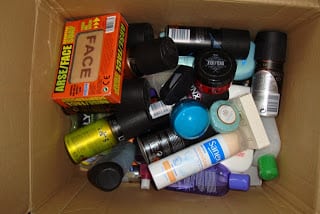 Ah, the Arse/Face novelty soap from many moons ago. This has now been moved to the chucky-out-box along with, I reckon, 70% of the remainder of the hoard. I have given myself a good talking-to. In future I must refrain from stealing toiletries from hotels as I never use them. And can members of my family please take note that I have no need for any more hand cream. Ever.

Unfortunately, as I was running around like a madwoman, I neglected to photograph or video the empty bathroom so you, dear readers, would have the benefit of a before and after shot, as you did with the infamous kitchen update of 2011. I can tell you, however, that the bathroom, having been installed about 15 years ago, was in need of an update. The showers were leaking and mastic-ed up to the hilt, the bidet was cracked as I’d dropped a tap on it (don’t ask) and we were having an ongoing battle with limescale and mouldy bits. Plus it was blue. I’ve gone off blue. Bit cold for a bathroom, although probably all the rage in the 1990s.

On Thursday I did manage to take some photos and it looks something like this now: 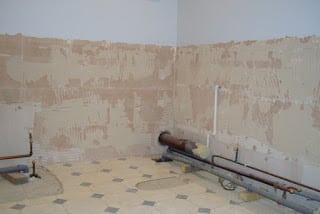 The plaster dust and muck is settling onto every surface like a delicate hoar frost, the delightful sound of drilling fills my head with its penetrating pitch and it’s hard to feel at home in my own home as I squeeze past the loft ladder and proffer a mug of coffee to the electrician above me. But it’s good to see the sturdy mugs again which have emerged from their place at the back of the kitchen cupboard: the far-too-jolly Mr Happy mug; the red and white, came-with-an-Easter-Egg, KitKat mug; the funny-at-the-time Flirty at Forty mug.

I reckon we have a few more weeks of this to come. Am girding my loins.