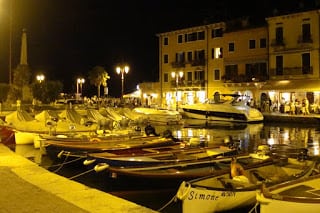 The pretty town of Lazise

Despite the heat I am keen to see more of the other towns on the lake. We could get a local bus or try the ferry: the problem seems to be we would spend an hour or two getting somewhere then have to wait for a few hours for another ferry back. We don’t really fancy spending hours in the heat of the afternoon sun just seeking shade. I suggest to Dougie that we contact our rep and go on a couple of organised tours. Hubby initially very wary and I have to coax him into trying not to imagine his worst organised-bus-trip nightmare of being herded around with a lot of Brits in socks and sandals. Eventually we plump for a night cruise to Lazise and, gulp, a full all-day lake tour.

The night cruise consists of a trip to see the Bay of Mermaids and then a stop in Lazise for an hour or so. I’m not sure what I expect of a “cruiser”: it looks a bit small to me and we are all seated whereas I had somehow imagined myself wafting around on deck. Not quite sure why we really need the services of TWO holiday reps, but the running commentary from Angel (I kid you not) was unintentionally amusing nonetheless:

“Hi, my name’s Angel and this is Robin, but he doesn’t like to be called Robin so call him Rob instead…Ooh there’s a family of swans: there’s the female swan called a…a…yeah that’s the mother and the baby swans…what are they called again…hmmm yes well the eggs hatched in five weeks and you can see they are still brown, you know they can go white overnight. When we get off at Lazise…what’s the proper word for that Luigi?…oh yes, disembark, yeah well when we get back on again the boat will either be on the left hand side or the right hand side”

Thankfully young Robin (sorry Rob) is a nice chap and goes round the passengers handing out glasses of Asti Spumante (no expense spared). Our son is also given a glass and makes sure he glugs it down pretty quick in case someone changes their mind. He is in a lovely mood after that.

The town of Lazise is gorgeous, especially at night, so we have an hour or two to explore before we are whizzed back to Bardolino. Not a bad evening at all: Dougie is warming to the idea of someone doing it all for you, and his impressions of Angel keep us all chortling for the rest of the holiday so that’s worth the money in itself. 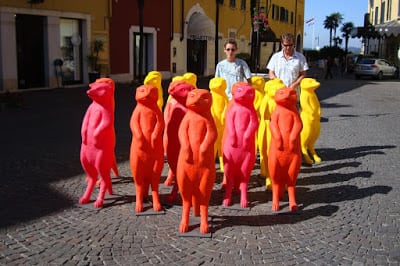 Our second excursion, the dreaded all-day bus trip, is organised by a local firm and the courier, Katya, really knows her stuff. Our first stop is Sirmione, a beautiful town perched on the end of a peninsula jutting out into the lake. No sooner have we got off the coach then we are jumping onto a motorboat for a 30 minute tour of the peninsular with our captain, Umberto, a wizened chirpy little fella whose grasp of English consists mainly of a few chosen phrases:

“You see over there….very nice hotel…five star…500 euros a night…no dinner…no wine……no water….no senoritas…beautiful beach…very private….topless ladies…looky looky…very nice….”
After a hilarious 30 minutes with Umberto he turns the engine up to full speed for the last few minutes and we speed into the harbour. Fantastic. An hour in the lovely town is enough to persuade me I’d like to come back again in the future.

A long drive next to Limone where we arrive on market day so it is heaving. We are on the cusp of having a bit of a domestic due to the heat, dehydration, and inability to decide where to eat. This isn’t helped by having to follow our guide for ten minutes so she can show us where to meet later. A group of tourists following a woman waving a pink umbrella is just the thing my husband was anxious not to have to do. Thankfully war is evaded in the nick of time and we have one of our nicest meals looking out over the more mountainous areas in the North of the lake.

A swift ferry trip to Riva nearly goes awry as Dougie doesn’t realise there is a stop before ours and is happily about to disembark at Torbole until he is spotted and dragged back on.

Before we reached our final stop we drive along the piece of road that Daniel Craig had whizzed along in his Aston Martin during the opening sequence of Quantum of Solace. We also see where the stunt driver had driven through the barrier into the lake, writing off said Aston in one leap.

Our final stop is Malcesine, another achingly picturesque town, and as we sat eating gorgeous 1 euro ice creams on the harbour front we decide this is as good as it gets for holiday locations. Even clambering on the bus behind the man in beige socks can’t ruin our happy mood.
August 2009