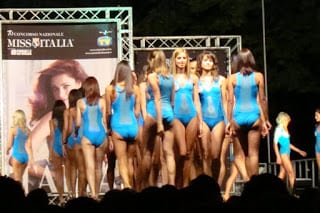 The contestants in the Miss Italy regional final (now where am I!?)
The days in Bardolino are lazy and fairly uneventful but as the sun set over the Dolomites and the wine loosens our limbs, we saunter into town most nights to have dinner. We did eat in the hotel until one evening when the service was so slow and chaotic that we nearly gave up and returned to the room to raid the fridge. Dougie had adventurously ordered swordfish “Sicilian style”. When it arrived it was a rolled-up, breaded, overcooked concoction that looked as it if had never been near the water. Hubby reckoned it must be called Sicilian style because they had taken a contract out on the swordfish and murdered it.
The evenings out are a joy. A ten minute walk into town and there’s a huge number of restaurants to choose from. There’s always pasta, pizza and grilled meats on the menu so the choice of venue can be made purely on location and ambience. On one night we hunt out a little place called La Strambata which has been given good reviews on Tripadvisor. It doesn’t seem that impressive to me when we eventually find it until I see my husband’s eyes light up and realise the waitresses are, to a girl, young, nubile and dressed in teeny shorts. Funny but we went back to La Strambata a couple more times: Dougie reckons their spaghetti carbonara is exceptional…..
My favourite restaurant is the Loggia Rambaldi: great location at the harbour and everything we have is delicious. Hubby has Venetian liver one night which I thought an unwise choice after the debacle with the swordfish. I dare him to ask for some fava beans and a nice Chianti to go with it. He declines, thinking it might lose something in translation.
On Wednesday nights there is always some entertainment in the main square. We hear beautiful music on the first Wednesday and follow the sounds to see a small orchestra playing in front of the main church. We are impressed with their musical ability so look for a poster to find out who was playing. The poster reads ” Berkshire Maestros…from Newbury Music Centre”. Supporting our compatriots, we give them an even bigger clap after that.
The second Wednesday we are treated to the Bardolino Philarmonic Orchestra and choir. A huge number of musicians and singers fill the church steps and entertain us with songs from the shows. Dougie and Rory despair as I am naturally excited about this, being a bit of a Musical Theatre amateur myself. The choir do a very unusual Mary Poppins medley in Italian and then one of their number dons a bowler hat and has a go at Cabaret. The conductor informs the audience they will now sing “Time to Say Goodbye”. A pretty good rendition follows, everyone cheers then naturally disperses only to hear the conductor announce,”And now we will sing Love Changes Everything”. A largely depleted audience claps as best they can to compensate for the unfortunate programme order! 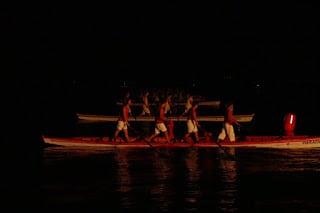 Never a dull moment on the shores of Lake Garda, we are also lucky enough to see one of the Bisse boat races on the lake. Four men rowing in each boat but standing up as if in a gondola. Think Steve Redgrave with a cornetto and you get the picture. Boats from all the towns compete against each other, having paraded through the town before racing on the black lake, lit up from the shore. Quite a bizarre sight.
But I have to say, the favourite night for my two boys has to be the final evening in the neighbouring town of Garda which is playing host to the regional finals of the Miss Italy contest. Despite the fact that it is starting late even my lazy son perks up at the thought and quite happily walks all the way to the town. The contest is held in the open air with seats for everyone to watch. So for a good couple of hours we watch 31 Italian hotties strut up and down the catwalk. I keep thinking they will whittle them down to the final 15 or so, but the same 31 are shown in dresses, swimming costumes and bikinis. When another round starts with clothes being added this time, the lads decide theyve seen as much as they are going to so we toddle off. But Number One Son is mighty pleased that he’d wandered down to the front with the rest of the press corps and got some great pictures he can post on facebook to make his pals jealous. I’d seen quite enough pert bottoms for one night, thank you very much!
August 2009