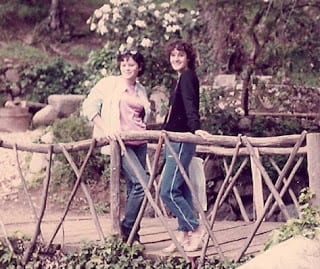 I don’t think I was ever cut out for budget travel, backpacking or slumming it. As you can see from previous posts I tend to choose hotels based on the thread count of the Egyptian cotton sheets and the presence of a Nespresso machine. So it should come as no surprise to hear we’re off to Portugal this summer, to the 5* Martinhal Resort where I can park my lazy behind on a sunbed and I won’t have to mop the floor every day or bring my own bedding (what were we thinking, having a  holiday in a mobile home last year!?)
This isn’t my first trip to Portugal. That was in 1983 while I was at University. I was reading Geography at Cambridge and signed myself up for a field trip to the Algarve. Bloody hell, I thought, that sounds like a lark. I pictured myself lying on the beach all day, maybe taking the odd photo of rock strata, possibly noting the cloud formations above, while supping Mateus Rose and eating sardines. It came as quite a shock to discover that while we were staying in the sweet village of Burgau, in a small cottage overrun with ants, we had to actually do some field work. We had to climb hills, measure valleys, take river samples, all in the pissing rain. The weather came as quite a surprise: I had envisaged wall-to-wall sunshine, albeit we were going in March.

As you may notice from the photo above, I really wasn’t dressed for the tasks. I’m sure I had some walking boots for the day up the mountains, but on one jolly sightseeing trip to a winery (that’s more like it) I wore fetching blue tracksuit bottoms and cream stiletto sandals. Yes, really! Have a closer look. That’s me posing like a complete eejit on the right with my friend Helen, who managed to bag herself a Portuguese waiter during the week, so that was a plus.

My second visit to Portugal was in 1986 when my boyfriend and I made up a foursome with another couple, Sarah and Mark. A very pleasant week in a villa in Armacao de Pera. But I was summarily dumped a few months later so I’d rather not talk about it.

So I’m returning, en famille, to the beautiful Algarve and, fingers crossed, this time it will be memorable for all the right reasons. My only reservation is that, although I knew that as we were staying in the most southwesterly point in mainland Europe, dubbed by the Portuguese ‘Fim do mundo’ (the end of the world) centuries ago, I didn’t quite anticipate how windy it’s likely to be. Apparently the last few weeks the wind has been so strong, diners have been given blankets to wrap up in on restaurant terraces. I should have known, for heaven’s sake, I’m a geographer, I can read a map…ish. Though maybe the fact that the national windsurfing championships are taking place on our beach this weekend should have given me a clue….