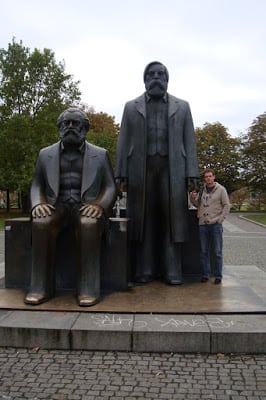 20 years after the fall of the Berlin wall seems a fitting time to visit the city and encourage a sense of history in our teenage son. Mind you, bargain Ryanair flights play their part in influencing this decision to have a half-term city break. £3.99 tickets don’t seem quite so cheap, however, when we decide to pay the extra for hold baggage rather than carry-on cases. I’m sorry but a girl needs shoes!

Some passengers at East Midlands airport don’t quite understand that “ONE PIECE OF HOLD BAGGAGE” means precisely that: any extra handbags or laptops have to be included within the one bit of luggage. This causes quite a stir at the departure gate as much furious re-packing occurs: scanties are flying everywhere with last-minute shoving of handbags into groaning cases. The advantage of putting luggage in the hold however, taking into account the extra fiver per flight, is the fact that as there are fewer people checking in bags, the queue is pretty short. You can wander around the terminal without trailing your case behind you, the race to find a free seat on the plane is easier and, best of all, when we get to Berlin, the bags are on the carousel before we even get to the baggage area so we aren’t delayed at all. Top result!

We decide to get a taxi from the airport which, being a no-frills airline, means it is in Poland. I jest, but it is a little way out of the city centre. As we near our hotel, Dougie intelligently questions the taxi driver:

“Is that the remains of the Berlin Wall over there?” 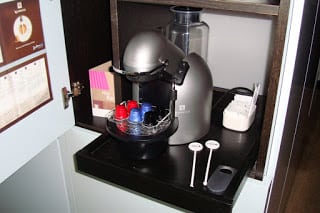 Hotel is a fab find, Radisson Blu, chosen by me because the rooms have a Nespresso coffee machine in them. I can’t recommend this coffee enough: I should get a job working for them as extolling the virtues of said coffee is one of my favourite pastimes. This place is a dream and I make the most of it by secreting a few “extra” coffee capsules into my bag to take home as…ahem…souvenirs. Well it beats nicking the toiletries!

The room isn’t ready when we arrive so we take off for a stroll to Alexanderplatz – a huge square, the heart of the city before World War II and only now starting to recover from the years under Soviet rule. There is a cold, slightly threatening air about the place, not helped by the number of beggars. But, as elsewhere in Berlin, great things are happening on the building front to bring the eastern parts of the city back to life. The restoration of 18th century Nicolaivertel, Berlin’s oldest quarter, is beautiful and quite a constrast from the chilly, brutal architecture a few steps away.

Revived by coffee and cake, eventually one of the bedrooms is ready. We pile in and wait for Rory’s room next door to be ready too. This requirs a bit of hassling, not helped by my husband’s request for an extra key card for our son’s room. A reasonable request, to have access to our own son’s room, but the receptionist isn’t best pleased:

“Vy are you vanting a second key?” she interrogates.

Hubby tries to explain there isn’t a second child and that no, we would not be paying for an extra person for breakfast as there is still only three of us. Ah it is a perfect example of German intransigence versus Scottish belligerence. Belligerence wins.