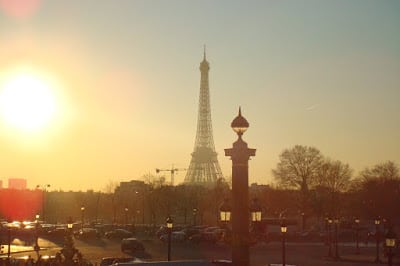 Early evening in Paris. Our son Rory is official photographer!
For this half term my blog could well have ended up as “Mum’s Gone to Newcastle to Visit her Parents” or even “Mum’s Staying at Home to Catch up with all the Housework that Needs Doing” but Eurostar had some great deals that made a few days in Paris irresistible.
A bright sunny drive down to London starts fine until Hubby forgets that we aren’t going to Stansted and he has in fact been travelling for 20 miles down the A14 rather than keep on the A1. A few expletives later and it’s decided to continue on the M11 instead of turning back. We always find it easier to park at Cockfosters at the end of the Piccadilly line and get the tube in to central London. Much cheaper parking there than getting a train from Peterborough. Bit of a faff with our luggage though, not helped by me not walking quickly enough through the turnstile and getting my wheelie case jammed. Queue builds up fairly rapidly before I’m finally rescued by one of the guards.
Eurostar’s new terminal is at St Pancras and it’s very impressive: clean, modern and more like an airport terminal than the usual chilly train station. Sit with a coffee and a chocolate croissant in an effort to prepare myself for the French way of life which I could become accustomed to very easily! On the train one of our three seats is on the other side of the aisle and I notice it’s next to an extremely pretty young French woman wearing an off-the-shoulder satin top. I plonk myself next to her rather hurriedly and smile sweetly at Hubby who wasn’t quite quick enough to bag the seat for himself. Remembering how badly I got the dress code wrong when we were in Barcelona, I made a special effort not to look like a Brit abroad this time so my trainers were left at home. Have decided on the very European look of skinny jeans tucked into flat smart boots and a decent coat. Hubby has also had his wardrobe organised for him and his fleecy tops are forbidden. Everyone seems to be relying on me this time to help with the language as many moons ago I did A level French. I hate to point out that my spoken French is sadly lacking. Give me some old dusty tome to translate and I might make a reasonable stab at it if I have access to a dictionary, but expect me to have a conversation with someone…..????
When we arrive at the hotel/apartment reception I manage to tell them that we have a reservation. Normally when this happens, the receptionist takes one look at our dress, smiles to acknowledge our attempt at talking the lingo, then very graciously replies in English, we breathe a sigh of relief and everyone’s happy. Not this time. My French is obviously not too bad, but coupled with my “don’t mess with me, I’m cosmopolitan too” outfit, the woman at the desk thinks I really am French and replies as such. PANIC….PANIC….PANIC…..! I hear the word for surname and manage to say “Burgess” in reply, I then hear the word for key and realise she wants to know how many key cards we want. I burble the word “deux” but by now my sham is painfully obvious to everyone and we all revert to English before I embarrass myself any further.
We are staying at the Citadines Aparthotel Opera Vendome, which is in a beautiful pedestrianised street off the Rue de Capucines. Street of Cappuccinos is that??? Probably, as there’s a Starbucks on the corner! The apartment is okay, a bit soulless and bland but it’s got a tiny balcony for people watching, a kitchen, two TVs and even a DVD player so son is happy. Fling our bags down and wander out into the last of the French sunshine. Walk in the Jardin des Tuileries near the Seine with the rest of the smart coat brigade and the city looks breathtaking.
A quick change before venturing out to get some nosh and we’re so ravenous we fall happily into a pizza restaurant! Something called PastaPapa….good grief! All manner of odd conversations ensue as we muddle up our “oui” and “si”, not knowing whether we’re talking French or Italian whilst ordering spaghetti carbonara and pizza margherita! Feel slightly guilty about eating pizza and pasta in Paris but then decide that if we were in London we wouldn’t feel the urge to try a hearty shepherd’s pie and my Scottish husband certainly doesn’t yearn for an Aberdeen Angus steakhouse. The red wine is freezing cold but the food is hot and hits the spot. Bon Appetit! Or should that be Buon Appetito?!
February 2008