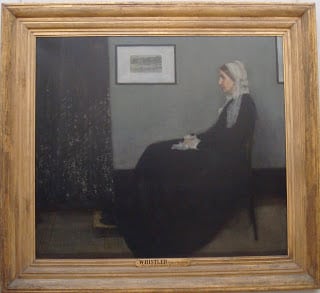 Its proper title is Arrangement in Grey and Black No 1 which doesn’t do a lot to inspire, does it? Painted by James McNeill Whistler in 1871, it is more commonly known as Whistler’s Mother.


This painting has a special place in my heart because, whenever I look at it, despite its rather dull appearance, it never fails to make me smile.

My son Rory, aged 11 at the time, took this photo of Whistler’s masterpiece, at the Musée d’Orsay in Paris. He stood in front of this revered piece of art and laughed his head off. Why? Because at the time Rory was a huge fan of Mr Bean and, in particular, the film, Bean, where Rowan Atkinson’s character, whilst in charge of guarding this priceless artwork, proceeded to deface it.

For those who haven’t seen the film, Mr Bean sneezes on the painting and tries to wipe it clean with a hankie which, unfortunately, is covered in blue ink. The ink causes blue smudges to appear, which Bean then tries to remove with lacquer thinner, resulting in the face of Whistler’s poor old ma being completely dissolved.

Bean does make an attempt to rectify the damage by drawing on a new face: 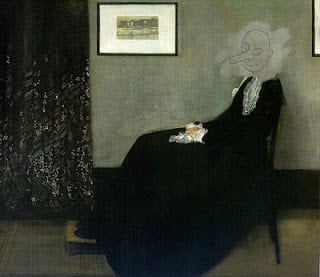 In the end, the cartoon mother is replaced by a poster of the painting from the museum’s gift shop and no-one is any the wiser.

Rory was quite delighted to see the original painting, though I’m sure he preferred the one above. It made me realise how much fun children can experience in art galleries and museums. He saw lots of art on that holiday: Van Gogh, Picasso, Degas, Monet, Rodin….and snapped away quite happily with his trusty camera. He wasn’t at all bored. We made up names for paintings and looked for celebrity looky-likeys such as  ‘Tiger Woods playing the banjo’.

I remember the Bean film very well as the DVD has been played numerous times over the years. In particular I loved the ending, when Mr Bean actually strings a few sentences together and makes a bizarre but, ultimately, quite moving tribute to Whistler’s Mother.

Hello,
I’m Dr. Bean. Apparently. And my job is to sit and look at paintings. So, what
have I learned that I can say about this painting? Well, firstly, it’s quite
big, which is excellent. If it were very small, microscopic, then hardly anyone
would be able to see it. Which would be a shame. Secondly, and I’m getting
quite near the end of this… analysis, secondly, why was it worth this man
spending fifty million of your American dollars? And the answer to that is,
that it’s a picture of Whistler’s mother. And as I’ve learned, staying with my
best friend David Langley and his family, families are very important. Even
though Mr. Whistler was obviously aware that his mother was a hideous old bat
who looked like she’d had a cactus lodged up her backside, he stuck with her,
and even took the time to paint this amazing picture of her. And that’s
marvellous. It’s not just a painting. It’s a picture of a mad old cow who he
thought the world of. Well that’s what I think.

I have been reading the #ArtIHeart series of posts on the blog of Midlife SingleMum and decided to join in this week.