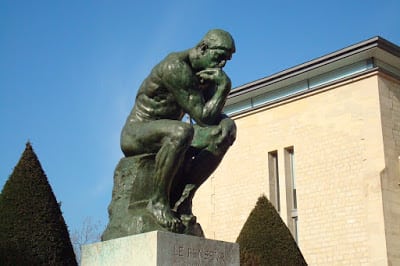 He’s having a break from all the walking………
Hubby and I both wake at 5am, me with aching legs and him with a bad back. Too much walking combined with a very hard, uncomfortable bed. We’ve only got one pillow each so I mumble something about asking the maid for extra ones. But what’s “pillow” in French? Hubby says “Isn’t it something like petits cochons?” to which I manage a pained chuckle and say that I’m sure the maid would be most amused if we asked for a couple of little pigs for our bedroom!
Another glorious day awaits us when we finally get up and out; as usual we can’t get our teenager-in-waiting to surface very quickly so it’s after 11 am before we eventually walk down to the river to go to the Musee D’Orsay. I’ve been looking forward to this part of the trip as this art gallery, in a beautifully-converted railway station, has a huge collection of Impressionist paintings from Monet, Renoir, Van Gogh etc.
There are long queues to get in but we have already purchased a two-day Museum Pass so we go to a much shorter queue which gets us in within five minutes: this is hugely satisfying and we have to curb the urge to whoop and wave our passes at the other people still crowding outside. However in our glee at getting in quickly we don’t have the wit to find ourselves a map of the museum. Instead we see a set of stairs on the right and struggle with our tired limbs to reach the top floor where the Impressionist paintings are on show. It’s only when we get the distinct feeling that we’re going against the flow of traffic that we realise everyone else had sensibly turned left when they entered and had reached the top floor using the escalators.
Feel very cultured seeing all these paintings and they really are fantastic. I found a Degas painting called “The Ballet Class” and it brought back memories of my childhood as I used to have a print of it in my bedroom. Whilst I’m feeling all emotional, my son is laughing like a drain because he has found Whistler’s Mother, a painting which is the main subject of one of his favourite movies, Bean, with Rowan Atkinson. In the film Mr Bean ruins the painting when he sneezes on it and tries to clean it with paint remover. It was a great delight for our boy to find the real painting had actually survived!
Starving and thirsty we dither about where to eat and instead of finding some chic little bistro for lunch, we buy baguettes and crepes from a takeaway then eat them on the museum steps. And me in my good coat!! 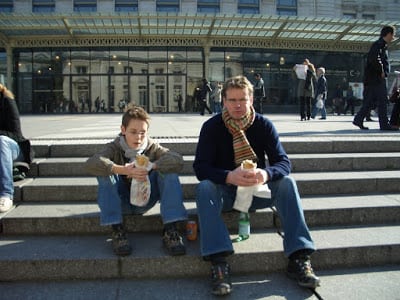 Like Father…like Son.
With our Museum Pass at the ready, we saunter over to the Rodin Museum and enjoy the sunshine amongst the sculptures, including the famous “The Thinker”. We find a bench to sit on to finish our drinks and hubby is rewarded for his money-saving lunch by a pigeon pooping on his head. This amuses me greatly. “Wouldn’t have happened if we’d been in that nice cafe, would it?”
More museum-trudging in the afternoon. The huge Hotel des Invalides with its magnificent gold dome was built in the 17th century for wounded soldiers by Louis XIV and although there are a few old soldiers still housed here, it’s mainly used to accommodate the Musee de l’Armee. Inside we find Napoleon’s tomb with his famous battles etched around the floor. Surprisingly no mention of Waterloo!
We catch the Metro back to the apartment, accompanied by some buskers who are allowed inside the carriages, unlike in London where they are kept to the station escalator areas. Yesterday a chap was playing an accordion and today we are joined by a trumpeter and French horn player complete with backing tracks. It’s all rather jolly really and I’m tempted to sing-a-long until I receive some hard stares from my boys…..!
February 2008