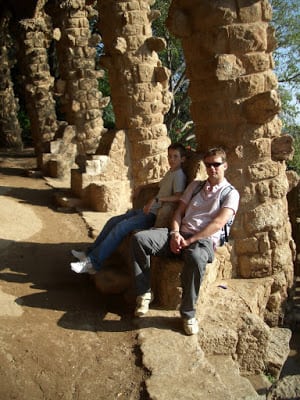 My boys in Parc Guell.
As we check out this morning, the VIP status obviously pops up on the hotel’s computer again so we are best buddies with the reception staff. Nothing is too much trouble; bags are taken to the taxi, hands are shaken with gusto and I am given a special form which I can fill in to leave a message for the manager. Good grief what on earth do they expect me to say? I decide to just thank him for our stay and tell him that as the hotel has been excellent (or is that “excellenteee”?)

During the drive to the airport we remark how chic and well-dressed the people of Barcelona are. All ages wear such smart clothes and take such a pride in their appearance. Initially I had worn trainers to go sightseeing but after the first day I felt so underdressed I had to re-think my wardrobe and realised I hadn’t quite got it right. Even though it’s been a balmy 18 to 20 degrees, everyone has been dressed for their equivalent of winter; skinny jeans tucked into boots, beautifully cut jackets, cashmere scarves and sunglasses! And there are no fat people……..at all! Surely some tubbies exist in this city? Maybe the Catalan porkers stay at home? Only the fashionable are allowed out?

Back to reality at the Easyjet check-in desks and the scuffle once again to get the right queue. Get it all wrong today as we make the fatal mistake of queueing behind a man wearing a hat. Believe me when I say that a queue with a hat-wearing male will move slowly because when he reaches the desk something will be wrong and it will necessitate countless phone calls and faffing about. Last year an old man in a flat cap caused us headaches; today a short annoying bloke in a Fedora holds us up.

Return home and decide I must “Barcelona” my wardrobe. So I now have my boots, skinny jeans, scarf and shades so when I teeter round Spalding I can pretend I’m still strolling along the Passeig de Gracia rather than the Hole-In-the-Wall Passage. If only my mate Jose could see me now…….!