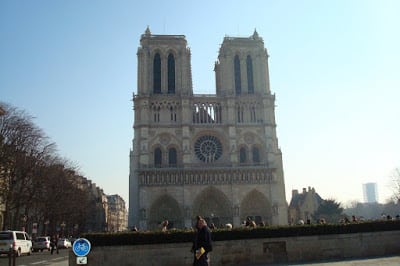 We have the second day of our 2-day Museum Pass to use today so need to get our money’s worth, but thankfully it includes most of the attractions we want to see anyway. The first port of call is the church of Sainte-Chapelle, a Gothic wonder built by Louis IX in 1248 and famous for its 15 stained glass windows towering 15m to the roof. I’ve been waxing lyrical about this place to husband and son so it’s a little disappointing when we first enter as we can’t seem to see any windows at all. We then realise the church is on two levels, the lower chapel was used by servants and commoners whilst the royal family and other big-wigs used the upper level. As we emerge from the winding stairs the sight is incredible; The sun beaming in through the windows is quite magical.
Having oohed and aahed in Sainte-Chapelle we pop next door to the Conciergerie. It was famous during the Revolution when over 4000 citizens (including Marie-Antoinette) were held prisoner before being guillotined. We were expecting something a bit gruesome or exciting but it was a dull place: a few sub-standard dummies with bad hair lying in odd positions in their cells. The value of the Museum Pass came into its own here: as we hadn’t specifically paid to enter, we could spend ten minutes realising it’s a bit rubbish and come out again. Notre-Dame is also very close but hunger has set in again and lunch beckons. I can feel Hubby leaning towards a haemorrhoid-inducing-sit-on-a-cold-wall-with-a-baguette routine!! But I’m having none of it and find a busy cafe/restaurant overlooking the river. It takes a good while for hubby to stop hyper-ventilating at the price of a beer before he eventually chills and has to grudgingly admit that it was a good idea! Properly rested and fed, we do a quick whizz round Notre-Dame which is very beautiful. We then saunter round the very pretty streets of the Ile St-Louis before getting the Metro back to Madeleine station. It strikes me that the French Metro stations sound so romantic: Madeleine, Hotel de Ville and Chatelet. I start wondering what the London stations would sound like if you were to translate them into French: Jambon De l’Ouest, La Croix du Roi and La Rue du Boulanger sound so much more enticing than West Ham, Kings Cross and Baker Street!
Our sightseeing is still not over today. After a snoop round the expensive food shops of Fauchon and Hediard, where there are more assistants than customers and the cheapest thing we can find as a gift is a box of biscuits for 8 quid, we look in the window of a caviar shop and discover a small tin for £2000: that’d be great on toast I reckon.
But the night is still young. We pay a visit to The Orangerie, a gorgeous art gallery which has some huge Monet canvases of waterlilies. On the floor below are a selection of other works and we play a game of “Spot the Ugliest Person in the Painting” and “Which celebrity can you recognise?”. Who would have thought that Cezanne’s wife (or was it his mother) was such a minger and that there’s a painting there of Tiger Woods playing the banjo!
After a quick dinner we box clever and visit the Louvre at about 8pm when the queues have gone and the atmosphere is peaceful. The huge glass pyramid is an exhibit in itself, and quite eery at night time when you’re underneath it. As usual we forget the map of the museum and run about like fools following picture clues to the location of the Mona Lisa. My son with his camera is in his element here, snapping away at the Venus de Milo and the old inscrutable Mona Lisa herself. We are able to walk right up to the painting and surprisingly it is rather special after all. We only spend about an hour here, which means we only see a tiny part of the vast museum but by now I’m glazing over and all these cherubic faces are merging into one.
Sad that we’ll be going home tomorrow as there’s actually still so much we haven’t seen. Most impressed with Paris: it’s pricey, especially with the poor exchange rate at the moment, but it’s stunning to look at and so clean. The buildings look as if they’re regularly sand-blasted so the stone-work is light and free of pollution and the museums are far from the dusty old places I thought they might be. Will have to return another time but for now I’m too exhausted from all this hoofing about and I need my bed and my petit cochon….
February 2008