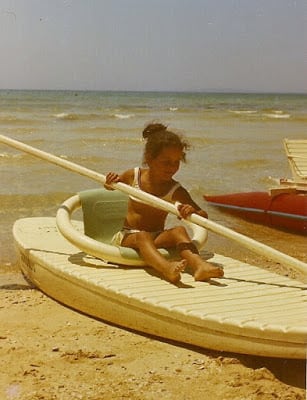 Did you all see Tim/Charlie (who could tell the difference?) in the latest Young at Heart Photo Album. Tim in his sweet sandals and socks, on his stripey deckchair, lapping up his ice-cream. A typical English summer scene.

Tim tagged me in this guess-the-blogger-as-a-child meme, and I found the above photo which, as Tim said, showed “Mum’s Gone to” not getting anywhere very fast, trying to paddle on the sand. The photo was taken in Majorca when I was nearly five years old. This was in the very early days of package holidays and my first time abroad.

My parents tell me that when this photo was taken they noticed a chap also taking photos of me by the water’s edge. My dad apparently went to speak to him to ask what he was doing. When he explained he was taking photos for a German magazine, that seemed perfectly acceptable to my dad. Over the years they often said, “Wouldn’t it have been nice to have had a copy of the magazine?” HELLO?!! God knows where those photos ended up but we never contemplated anything other than the explanation we were given. How times have changed.

The other thing that makes me smile about this picture is being amazed at how brown I was. In the late 60s and early 70s no-one really gave much thought to protecting children from the sun. If this photo were taken today, I’d probably have a big floppy hat and a sun-reflecting all-in-one suit, not an itsy-bitsy white bikini. Our family used to love getting tanned: Mum would slather on a Factor 2 now and again but otherwise I’d spend all summer looking nut brown. I would sit in the bath each evening admiring my tan lines: a few pink bits never bothered me as “they will turn brown eventually!”

Now have a little look at the bonny baby below. Don’t you just want to pinch those chubby cheeks? Who do they belong to? I think this little girl with her tiny bunny for company may now prefer her dogs and some cuddly lambs? But she probably still has ruddy cheeks due to all that bracing Northern air up on the farm. 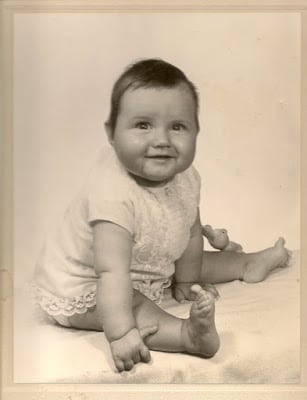