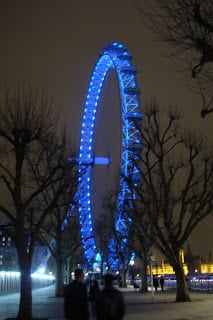 Dougie and I were supping G&Ts in the bar of the Palace Theatre on Thursday night when John Prescott and his wife Pauline walked in. They joined us in the stalls to watch the new musical revival of Singin’ in the Rain. This wasn’t the first time we’d bumped into him; a few years ago we saw him in a diner on the A1 tucking into a full English.

On Friday night comedian Frank Skinner sat in the row in front of us in Wyndhams Theatre where we had gone to see veteran comic, Jackie Mason. Having looked at the back of Frank’s head for a couple of hours I can now say with some authority that he must have a very good barber: what a lovely cut! And a very handsome profile. As we followed him out of the theatre, he pulled on his rucksack and left with his friends and I was tempted to tag along as I reckon he would have been excellent company. 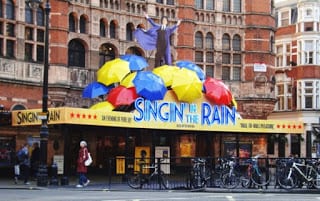 Two great nights of entertainment, regardless of the celebrity spotting. Singin’ in the Rain was a fabulously joyous show: full of colour, brilliant dancing and, naturally, all those great show tunes. I had booked seats near the front, Row D, which came with the warning that we might get wet. I should really have taken note of this and not worn a white top as, just before the interval, Adam Cooper performed the title number, kicking up waves of water into the front stalls. I walked to the bar looking like a Miss Wet T-Shirt contestant.

Show over, I was in heaven and skipped all the way back to the hotel, wishing it had been raining so that I could have splashed about in the gutters. Dougie enjoyed it too, though I could sense him fidgeting at bit at some scenes: “They could have easily cut half an hour out of that!” Philistine.

Jackie Mason’s show was a hoot. Performing without any support act at the ripe old age of 75, he entertained for two hours, mainly poking fun at the habits and peculiarities of his fellow Jews: the crowds of Jewish supporters in the audience lapped it up. We gentiles loved him too as most of the topics resonated with everyone.

During the day we walked…and walked…and walked. For the first time in my life I went to the National Gallery and wondered why on earth I had never been before. And oh how easy it was, so unlike the major art galleries abroad where there is a charge and a queue and a bag search. Because it was free there was no need to spend hours in there getting our money’s worth. We cantered around a few rooms, happily coming across major works from Constable, Gainsborough, Van Gogh, Manet and Canaletto. Coming out into the warm evening sun in Trafalgar Square we paused to watch a man squeeze himself through a tennis racquet. 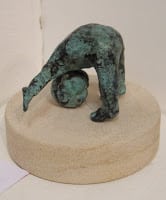 On Friday we visited the Affordable Art Fair in Battersea. Affordable in so far as the works ranged from £40 to £4000. I did look but couldn’t see the 40 quid one anywhere. However we did spot a tiny bronze sculpture, titled ‘Headstand’,  in one of the galleries. From a collection called ‘Wee Souls’ by Scottish sculptor Alison Bell, the figures were of children and as Dougie and I were missing our own boy who was off gallivanting in France, our hearts melted at this little character.  We bought him.