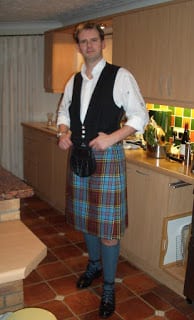 It’s Burns Night tomorrow and my thoughts return to some fond memories from last year when I realised it was “my turn” to have friends over for a meal. It was only after we’d all faffed about with our diaries that the date we settled on turned out to be the weekend of Burns’ Night so, husband being Scottish, we couldn’t just have everyone round for a curry.
So a traditional Burns’ Supper was now being planned and our six friends, very excited about this, insisted that Dougie should wear his kilt for the occasion. He relented but now the rest of us wondered about what to wear. I told everyone that if possible they should find something tartan. I have a tartan-ish skirt I thought would look fine with thick tights and boots and I’m sure others could find a scarf or something. By chance I bumped into one of my friends on the Friday and she said, “Ooh I’m going to struggle getting into that taffeta tomorrow”. She had given the game away; they had en-masse decided to come in full black-tie evening dress! They were all going to be arriving at mine the night after in full-length evening dress to be greeted by me in tweedy skirt, woolly tights and a jumper. A hasty wardrobe scramble ensued and something long and velvet was dusted down that evening.
The food for a Burns’ Supper is fairly traditional. Usually starts with Cock-a-leekie soup followed by haggis with neeps (turnips) and tatties (potatoes) and a pudding with oatmeal, cream and raspberries. Sounds manageable until I remembered one of our number is a vegetarian. The starter became a leekie soup without the cock and then when I eventually cooked it on the Friday afternoon I forgot the leeks so it was a Cock-a-leekie soup with neither cock nor leekie.
How do you circumvent haggis for a vegetarian? The haggis, when I looked at the ingredients, made me heave (lamb lung, beef heart, beef liver…..) and nearly turned me vegetarian too. However good old Sainsbury’s came to the rescue with a vegetarian haggis made with leek, celery, oatmeal, onions etc. I could manage potatoes and swede and created whisky-marmalade carrots. To try and make the haggis more palatable we found a recipe for chicken breasts stuffed with haggis and wrapped in streaky bacon. Sounded and looked quite good. One of my friends offered to make a pud so I remembered one of her classics was Eton Mess, a concoction of cream, meringue and strawberries. So I told her to swap the strawberries for raspberries and call it Gordonstoun Mess! We really needed another pudding so I discovered an internet recipe for Orkney Fudge Cheesecake. Couldn’t exactly get my hands on the Orkney Fudge but made a very good Tesco Finest Fudge cheesecake instead.
This whole supper thing was becoming ridiculously fancy now and I had to make an effort with the table too. So napkins were wrapped in tartan ribbon and I even stuffed tiny heathers into little coloured glasses to place down the middle of the table. The lovely thought that I could have easily just been ordering an Indian for everyone had to be banished from my mind! 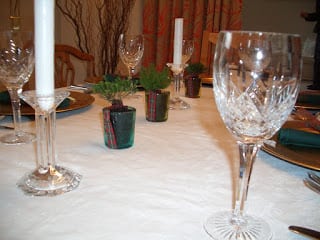 All of Saturday was taken up with preparation. Hubby did all the chicken-haggis-stuffing thing in a very Gordon Ramsay way, slapping his palm with the back of his hand shouting “STUFF, FOLD, WRAP, OVEN, DONE!” and bossing me about to fetch and carry for him when I’d spent about two days doing all the other cooking and preparation. We did a practice run making one of the chicken breasts for our son who declared it “gorgeous”. Huge sigh of relief: if a pernickety 12 year old can enjoy his haggis then we shouldn’t have any problems with a bunch of adults.
Guests arrived in their finery, armed with plenty of bottles of wine and choccies and another pal brought the cheeseboard including some alarmingly mouldy stuff with oatcakes in place of crackers. The meal went down a storm with both the meaty haggis and the veggie version a success. The cheesecake, though unwilling to be parted from the cake tin, was really yummy and the whisky afterwards lead to some very sore heads the next day.
Thankfully this year we aren’t entertaining anyone but will be having the chicken and haggis combo tonight as it’s now our son’s favourite meal. Do you think it’s because the haggis gets soaked in whisky?! Ah he’s a wee chip off the old block.