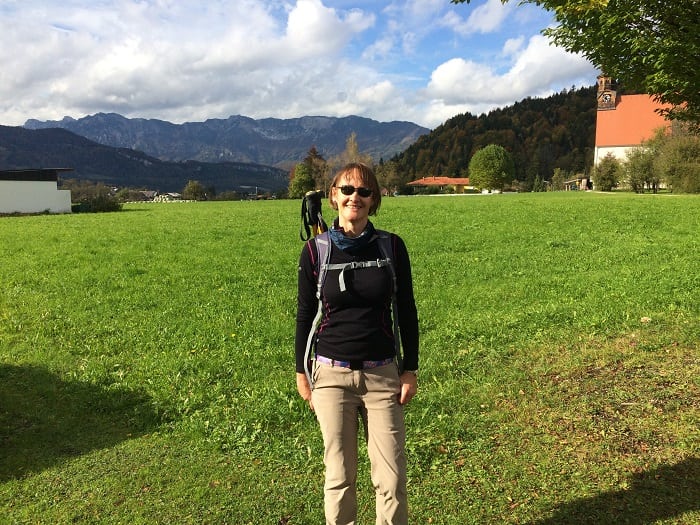 After our successful holiday with Inntravel earlier this year, when we let the train take the strain through Portugal, we decided we ought to try the type of holiday for which Inntravel is probably better known: a hotel-to-hotel walking holiday where you walk unencumbered while they transport your luggage onto the next stop. We browsed all the options online and pored over a proper thick brochure (remember them?) working out which trip would be best for an October hike. I say hike, but I was anxious not to over-extend ourselves with something that might put me off for life. Gentle walks, with the option of some challenges; not too hot; not too cold; good food and spectacular scenery. Not much to ask for. We found what we were looking for in Austria, the Lakes & Mountains walking holiday.

We booked this 7-night trip to Salzkammergut, the Lake District of Austria, just east of Salzburg. The holiday would begin at the north end of Hallstättersee in St Agatha for two nights, another two on the western side of the lake in the utterly beautiful town of Hallstatt before a three day stop in the town of Gosau, near Gosausee. It was listed as Grade 1-2 walking: “easy to moderate walking with some ascents/descents and occasional longer days.” We also opted for a couple of add-ons: two nights each in Salzburg and Vienna, Inntravel arranging the hotels and train tickets to take us to the capital.

We flew from Stansted to Salzburg, booking our own flights, though in hindsight it might have been worth paying a little more for Inntravel to book these for us and then the flights would have been ATOL protected – it had been a worry wondering if our Ryanair flight was on Michael O’ Leary’s hit list.

After a short flight of less than two hours, we were picked up by a local taxi firm and I must admit, it was ridiculously exciting to look for someone carrying a sign just for us. I’ve always wanted to experience that. In less than an hour we were deposited at our first hotel, the Landhotel Agathawirt, which has been welcoming visitors for over 400 years as it began life as a staging post on the back of the salt trade in the area. A family-run traditional Austrian guesthouse, it provides a place for weary travellers to rest and enjoy authentic regional cuisine. The current owner told me that Greta Garbo had stayed there, enjoying the food cooked by her mother and father. In the 1800s, artist Gustav Klimt was inspired by visits to this small village. We saw his painting After the rain – garden with chickens in St Agatha later on our holiday at the Belvedere palace in Vienna. 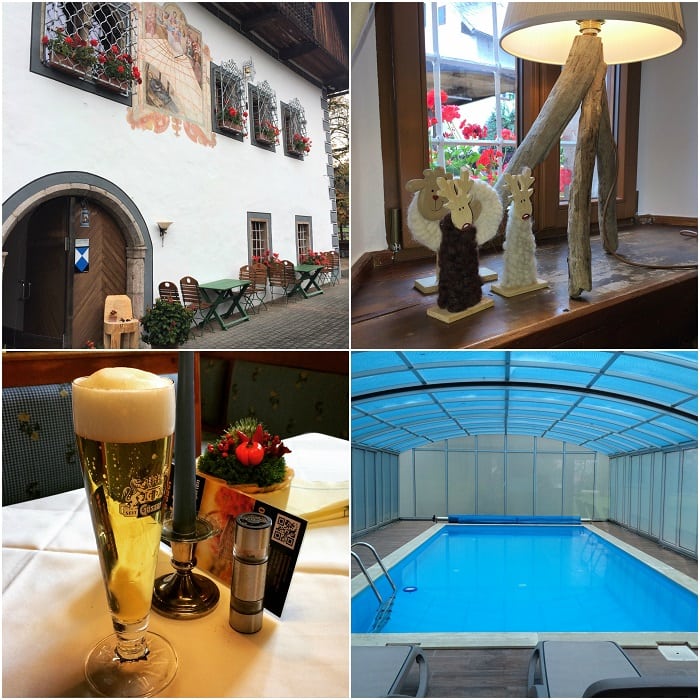 If you’re used to uber-chic modern establishments, you might feel you’ve stepped back in time at Agathawirt as the guest rooms are a little chintzy. But the hotel is furnished in a traditional style and is quite delightful. There are lots of original features in the architecture and amongst its facilities is, quite surprisingly, and indoor/outdoor swimming pool – just the thing for tired cyclists and walkers.

The Agathawirt soon captured our hearts via our stomachs, as we tucked into a lunch of goulash soup, Gosser beer and a huge helping of apple strudel with vanilla sauce (we discovered this is always how Austrians describe custard). Set meals each evening, included in the holiday price, were a four-course affair featuring hearty dishes including some delicious vegetarian ones and always a moreish dessert: chocolate pudding with vanilla and walnut ice cream on the first night and a poppy seed cake with cinnamon cream on the second. A large selection of Austrian wine was available and we soon learned that here, and in other hotels, single glasses from these selections proved to be much better value than a full bottle from the main menu.

Being on a walking holiday means you can indulge in large dinners and plentiful breakfasts in the knowledge that you’ll soon be working off the calories. On our first full day, having had a quick canter around the vicinity on the previous afternoon, we were ready for our first proper trail, trying our walking poles for the first time. We probably should have practised a bit before the trip, but walking around the Fens, on a completely flat terrain, felt a bit silly, so we waited until our arrival in Austria. I can’t recommend them highly enough. Even on a gentle walk, having the poles takes pressure off your knees and makes those ascents and descents so much easier. 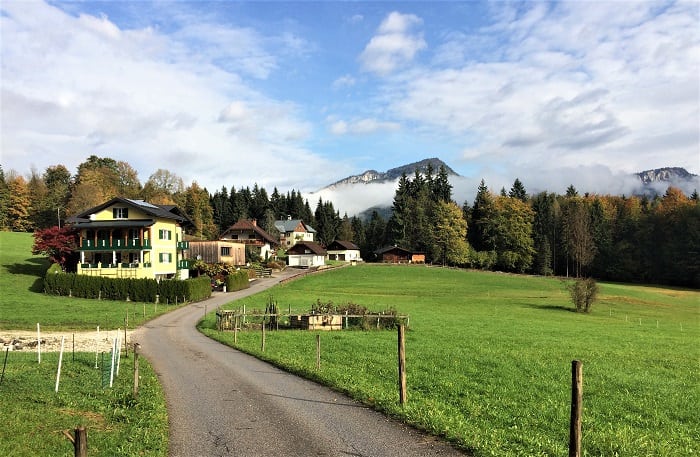 Inntravel provided three different walks for our first day. We rejected one because the Alpine hut, recommended for lunch and its views, was closed on Mondays and Tuesdays, and it was also noted as the most strenuous walk of the week. I thought it better to ease ourselves in gently. We opted for a walk following part of the traditional route of the Salzkammergut Soleweg, the ancient brine pipeline from Hallstatt to Ebensee. The walking notes explained it was a long walk, 17km to the town of Bad Ischl, with a return by bus. With a good map, detailed directions and excellent Austrian signage, we were able to follow the route through the woods and then through the Gschwandt residential area. We were staggered by how immaculate everything was: no litter, houses bedecked with geranium-filled window-boxes and incredibly neat log-stores. 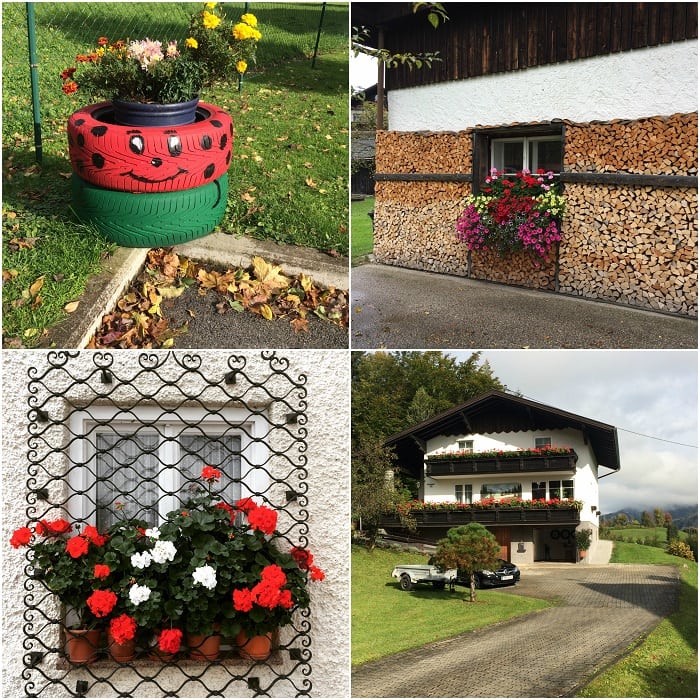 We started to feel hungry (already?) so at this point we went off-piste across the river to visit Bad Goisern for lunch. Whilst enjoying coffee and bruschetta we decided Bad Ischl was maybe too far for our first day. We lingered, instead, in this pretty little spa town which is famous for its handmade Goiserer walking shoe with its distinctive side-lacing: very dapper and apparently Arnold Schwarzenegger has worn them.  Not ready to go back to the hotel just yet, we realised we could use the notes and map to walk part of the routes mentioned on the other two options given by Inntravel. Heading north from the centre of Bad Goisern we investigated Lasern and Wiesen and dawdled happily back to the tiny village of Au, near St Agatha, following some well-marked trails.

It was here we discovered the bakery/café called Maislinger. A big focal point in the area, people were drawing up in their cars to nip into the bakery for cakes. Cyclists were parking their bikes and sitting outside with coffee and pastries. The tradition of kaffee and kuchen (coffee and cake) is something of a ritual in Austria so we felt obliged to join in. We popped inside, ordered hot chocolate (just to be different) and some dreamy-looking cakes then joined the cyclists at the tables outside. The sun still shining, we strolled back to the hotel for a dip in the pool and a rest before dinner, and congratulated ourselves on a fantastic first day. Bring on Day Two and our walk to Hallstatt. Will there be cake? 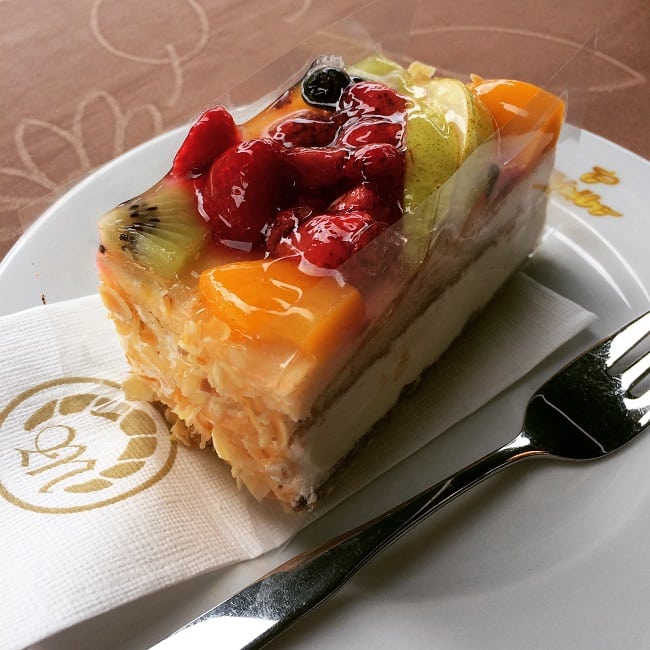 Here are the other posts from our trip: