Now you know how I fell in love with Seville and what we did during our short break, let’s end my Spanish sojourn with a suggestion of where to stay and eat in Seville.

There is plenty of accommodation for all budgets in the city and I think, as long as you stay within the historic centre, you won’t go far wrong with location. Our hotel was near the Alameda de Hercules and that’s probably as far north of the city as we would have wanted to stay, in order to see everything easily on foot. I had whittled down a list of possible hotels and sought the help of Scribbler in Seville, Fiona, to make the final choice.

As regards food, Seville loves its tapas bars. The easy, convivial tradition of sharing small dishes of food with friends and family is very popular here. But, like all modern cities, there is a wide variety of cuisine on offer. They do eat quite late in the evening here with restaurants opening around 8.30 or 9pm so make sure you stagger your eating throughout the day if your stomach is still in UK mode. 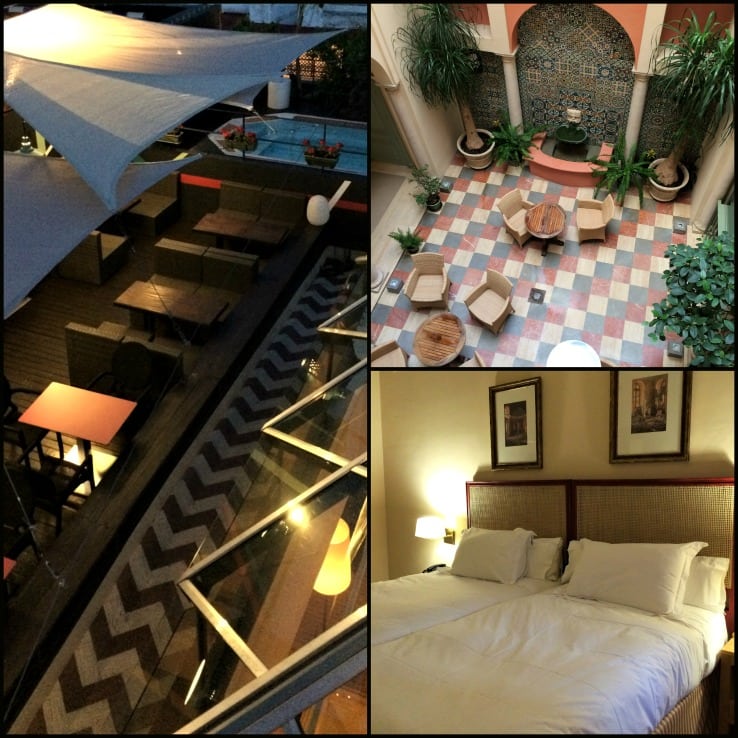 The Hotel Casa Romana is a very stylish, boutique hotel on the Calle Trajano. Near the Alameda boulevard, the property is in an area that has become a cool, hip place to hang out. In recent years many good restaurants and bars have sprung up, making it popular with the younger crowd: we did our best to blend in.  Like many buildings in the old part of Seville, the size and scale isn’t appreciated until you go through the main doors. Rooms are located around a central courtyard, providing a welcome respite from the heat in a Seville summer, I imagine. The décor was classy and cool with the bedrooms benefitting from wooden floors and high ceilings. Fully air-conditioned with supremely comfortable beds, we loved our room, named Caligula, and it was almost big enough to fit a horse if its namesake had ever wanted to pay a visit.

As this was the low season, the rooftop restaurant, imaginatively named Roof, wasn’t open, however it wasn’t hard to appreciate what a fantastic spot this would be in the spring and summer. A large space including a Jacuzzi and with wonderful views, particularly of the Metropol Parasol lit up at night. On our first evening we bought provisions from nearby El Corte Inglés department store and snuck up to the roof for a private impromptu picnic of tortilla crisps and local craft beer: the perfect way to start the holiday.

One of the main benefits of the hotel is its proximity to a number of excellent restaurants. Having walked for many hours during the day, we ran out of steam in the evening and were grateful (as you will see below) that there was plenty of good food a short stroll away.

Prices for the hotel vary wildly from season to season and from day to day. Keep an eye out on comparison sites but be sure to contact the hotel direct if it appears to be full online. 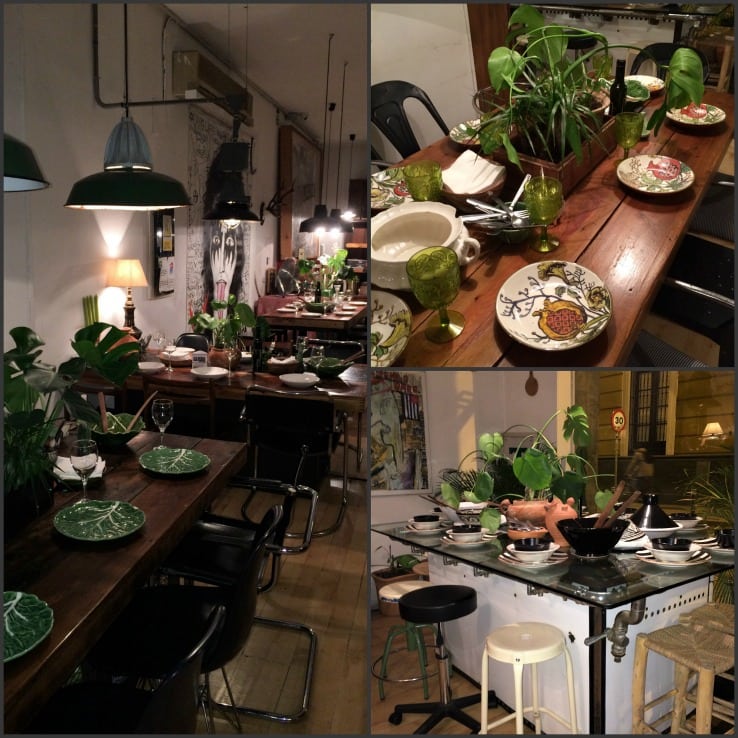 A strange name for a restaurant (literally meaning no place) and you could be forgiven for passing by, not realising it was a place to dine at all. In the window you can see an old range cooker, with a higgledy-piggledy assortment of chairs surrounding it and there’s an upright piano in the doorway. It’s situated virtually opposite our hotel and, ever the adventurers, we decided that was far enough to wander on our first night. What a stroke of luck – it was sensational. Large communal wooden tables, colourful crockery, masses of greenery and striking artwork on the walls, No-Lugar may appear too cool for school but its food is wholesome and comforting with a Mediterranean/middle-eastern slant. A yummy carrot and onion dip with bread was brought to the table and then we chose dishes such as quesadilla, moutabal dip with pitta bread, a hearty moussaka  and a superb kebab which was wrapped in pastry, a bit like a calzone pizza.

We dined here twice: once when it was quiet and we had a large table to ourselves and another when it was so busy we were shown to an occupied table and spent a very sociable evening getting to know a couple from Ireland.

The owners of No-lugar also own the Red House Gallery on a parallel street, Amor de Dios. We popped in there to meet Fiona for a mid-morning hot chocolate. The cosiness and eclectic style of the café made this another favourite. 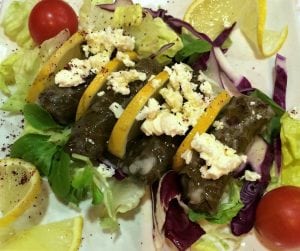 Situated just a few more metres away, the Al Sultan is a traditional hookah tearoom but with a separate restaurant if you aren’t sampling the hubbly-bubbly. We stumbled across it one evening as it was open earlier than all the other nearby establishments, ideal for our British digestive system.

The food was very good and great value. Lots of small starters including stuffed vine leaves and an avocado cream dip. My main course of beef stew with yoghurt and rice, was delicious, and Dougie’s lamb kebabs were excellent. The ambience was very relaxed, with friendly, efficient service. Complimentary mint tea was also a very refreshing way to end our meal.

Translated this means ‘Sandra’s chicken coop’ so I recommend you don’t translate it as it sounds far more sophisticated in Spanish. Top end dining this time but again within a few steps of the Casa Romana Hotel. Diners can choose to eat inside the restaurant or on the covered, heated terrace. We plumped for a table inside and spent the next couple of hours indulging in some very tasty dishes. We shared a divine sashimi and a fish salad with blue tomato and avocado. Dougie’s main course of entrecote steak with mashed potatoes, baked apple and stilton was superb and my fish of the day (I’ve forgotten its name – apologies) with saffron sauce, was perfectly cooked.

El Gallinero is a very upmarket restaurant and there were many well-heeled locals dining. This was our splurge night but it was well worth it. 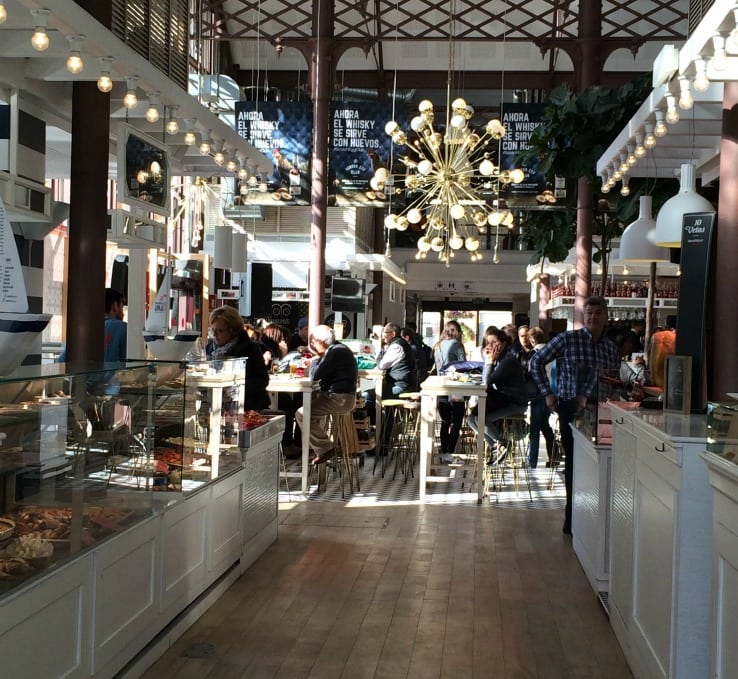 A big thank you to my Seville guru, Fiona, for letting us know about this market at the Triana Bridge. Perfect for lunch, this covered market has 20 stalls selling gourmet tapas including sushi, octopus and Iberian pork. Housed in a former fish market which looks incredibly modern with its glass and iron construction, it’s an upmarket place to have a beer and a bite to eat. All the shops/stalls looked appealing and the whole place was clean and welcoming with a great buzzy atmosphere.

On our final day we nursed a local Cruzcampo beer and tucked into paella, enjoying a spot of people-watching before an afternoon of sightseeing. There are plenty of tables outside overlooking the river so if you want to take your time, like we did, you won’t feel rushed.