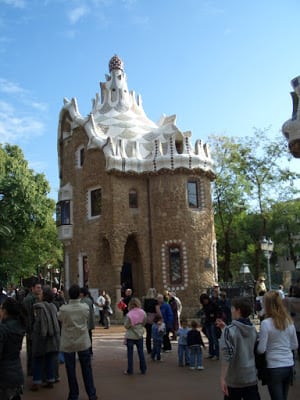 The gatehouse in Parc Guell; good enough to eat!
On the Gaudi trail again so a visit to Parc Guell is apparently a must-see. A bit of a traipse from the metro station and everyone who gets off there seems to be following us; clearly they think we know where we are going. Can’t help wondering what would happen if we just change our planned route and take a left somewhere; would they all keep following us? Hubby is very keen to do this for a laugh but I remind him we’re more than likely to get lost again so we keep going and soon lead our little company to the entrance.
Once inside we do our usual dithering regarding which way to go but our son has a brilliant idea of taking a photo of the sign-posted route at the entrance which we can then refer to when we have our regular disagreements. What a clever lad! Of course even with a map we still can’t agree which way to go but it goes some way to reduce the number of squabbles.
Spend the morning at Parc Guell, climbing high up to see the views of Barcelona from the top. Some amazing Gaudi architecture again, like the almost edible gatehouse (see above) and the weird stone columns which look like palm trees. The famous mosaic lizard is impossible to photograph as hords of tourists keep leaping on it.

Feel a bit Gaudi-ed out at the finish, probably because we’re hungry again. Find a shop with a surly assistant selling sandwiches. Son and I do well with some sort of chicken combination. Hubby does less well with a baguette he discovers is filled with an omelette! They do like their omelettes here, often as starters, but we haven’t come across one in a sarnie before. Eat baguettes on a bench facing a brick wall. Nice. Should really walk back up the hill and sit in the park but too much like hard work. Hubby feeling queasy most of the afternoon and son and I are on strike, not wanting to do any more wandering around. So we have tea in the hotel and a proper siesta for a change.

Evening meal a successful choice again and, as it’s our last night, we return to the bar for a tad more alcohol. Have a hugely entertaining hour watching a pair of American middle-aged women perched on bar stools trying to order a nightcap. Initially they fancy a glass of wine;
“Vino blanco….YES, VINO BLANCO…I think that’s right”
“No, actually I think I’d like a port….YOU HAVE PORT?”, they shout as the waitress is foreign so obviously hard of hearing. Waitress a little confused so they stretch over the bar to look at the bottles on show,
“I THINK THE PORT IS ON THE RIGHT…ALONG A BIT…NO NO THE NEXT ONE…OOH YOU HAVE TIA MARIA, I think I’ve heard of that, shall we have that?”
“Oh I’m not sure…..DO YOU HAVE KAHLUA? I love Kahlua,remember when we had it on the cruise?…CAN WE HAVE KAHLUA? WITH CREAM?….THICK CREAM”
At this point the waitress, the one doing the hoovering two nights before, sensibly calls the head barman who sets to with great aplomb and mixes them two kahluas and cream. As the two old lushes sway happily on their stools they are absolutely delighted with the result:
“Oh this is just the best…..THIS IS THE BEST. Now how do you say that in Spanish?”
“I know this one, I think it’s…..EXCELLENTE…..YES….EXCELLENTE!”
Barman smiles, a quick nod of his head and leaves them to their creamy concoctions. Meanwhile hubby and I are trying desperately hard not to laugh as this whole exchange has been a joy to watch. Half an hour later they decide to head for bed and ask,
“DO YOU HAVE WATER IN THE BEDROOMS? Did they have water in the bedrooms, I can’t remember? Was there a refrigerator? CAN WE BUY A BOTTLE? A BOTTLE…… TO TAKE UP TO THE BEDROOM?”
Bottle is purchased, some argy-bargy as to who’s room bill the water is going on, and eventually they stagger off, cream still shimmering from their top lip as they bellow,
“THANK YOU….GRACIES…..EXCELLENTE….YES….EXCELLENTE”