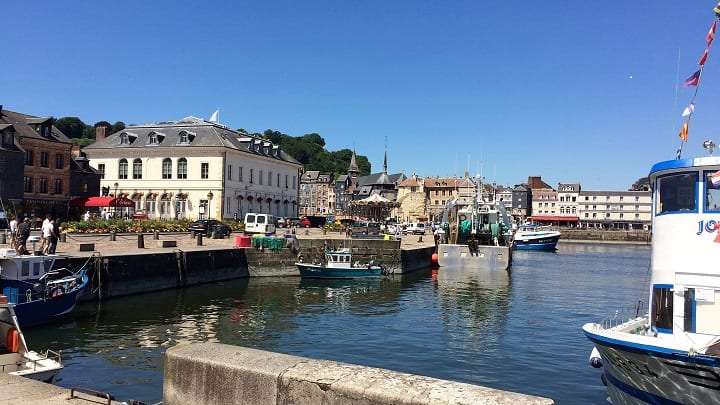 I don’t know what possessed us to tackle the strenuous hike from the centre of Honfleur up to Mont-Joli. It was a sweltering hot day during the heatwave of 2018. I was unsuitably dressed in a cotton frock and flimsy sandals. I gasped and complained all the way up, wishing I’d been carrying walking poles and wearing stout boots. 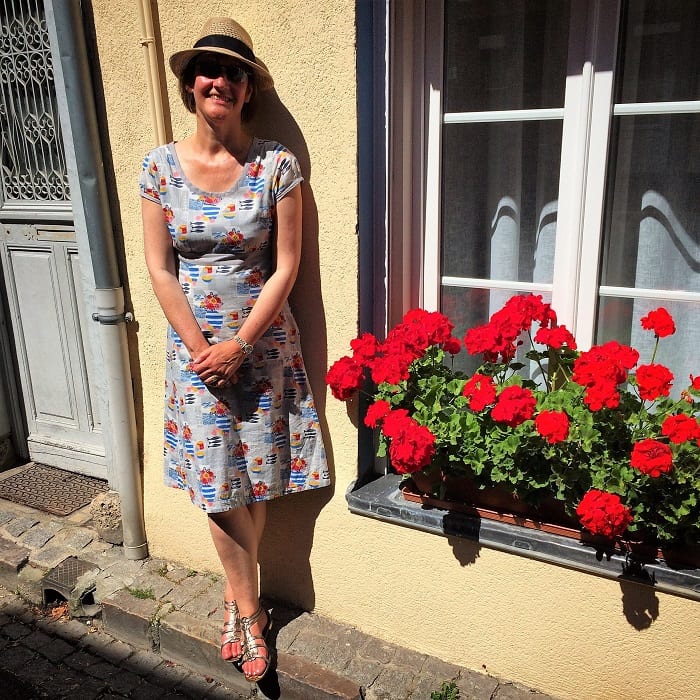 Hike up to the Côte de Grâce

It had all started so well. We had a few hours to ourselves in Honfleur. This gorgeous Normandy town, rich with a historic and artistic heritage, was an excursion on our U by Uniworld river cruise. After a short orientation walk with our guide, we were left to our own devices. Sensible people chose to spent the time in an outside café, slurping cider whilst admiring the old harbour and the achingly pretty houses. To be fair, we did do this but only briefly. I blame the very persuasive chap at the tourist office who provided us with a map and suggested a circular walk up to the Côte de Grâce, a hill to the west of the town. It was only 2.5km and we would be rewarded with magnificent views over the city and the famous Pont de Normandie, the longest cable-stayed bridge in the world, which stretches 2141km across the mouth of the Seine to Le Havre.

We did notice the route on the map had a short but extremely wiggly line on it. This was the Rampe de Mont-Joli and it was a heart-stopper. However, agony and ecstasy go hand in hand so we staggered to the viewpoint and then took in the sight of the town of Honfleur, the Normandy Bridge and the countryside of the Seine valley. 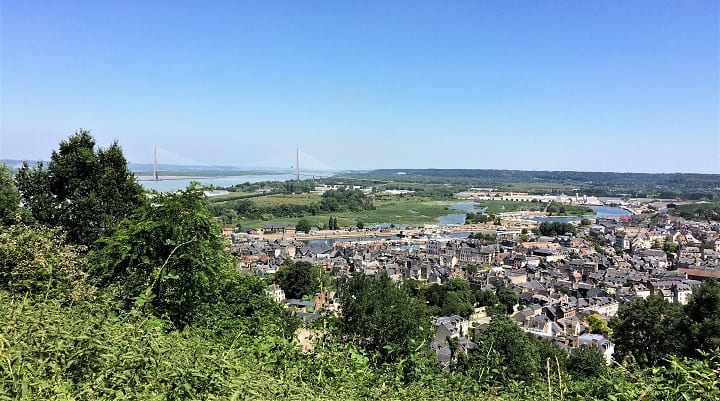 Feeling euphoric and slightly delirious we continued our walk to the Chapelle Notre-Dame de Grâce. This delightful little church was founded by Richard II and was the place where the last king of the French, Louis Philippe and his wife, Marie-Amélie, took sanctuary before leaving for England where he later died in Claremont, Surrey. There is another viewpoint from here that looks to the north, over the Seine, better seen through the telescope that’s positioned there. 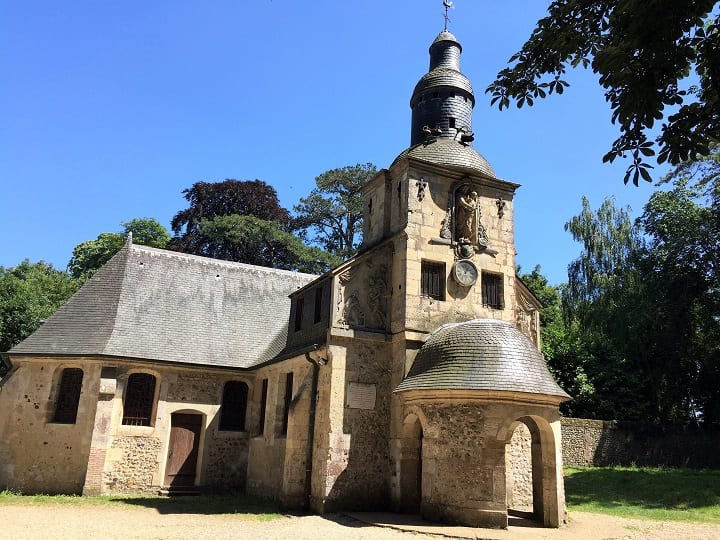 An easy saunter back down the Charriere de Grâce and we had returned to the heart of Honfleur with its many gardens, beaches and its picturesque old town. The vieux bassin (old harbour) is probably the most visited part of the town and its here you can see the narrow houses for which Honfleur is justly famous. 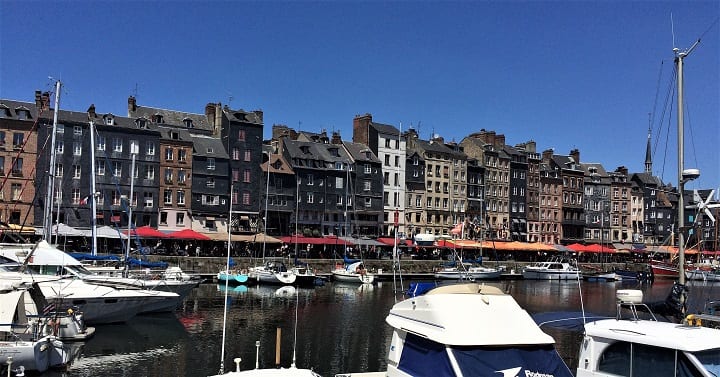 These properties, squeezed together on the Quai Sainte-Catherine, actually have two ground floors – one opening out onto the quay and the other, a little higher up, onto the rue de Dauphin or rue des Logettes. Each house was owned by two different families and were constructed between the 16th and 18th centuries.

St Catherine in Honfleur is the largest wooden church in France. It was built by shipwrights in the 15th and 16th centuries. The first nave was constructed on the model of a market hall using naval techniques, hence, from the inside, the impression of an upside-down hull. In the 16th century a second nave was added, with a vault more like a Gothic church. 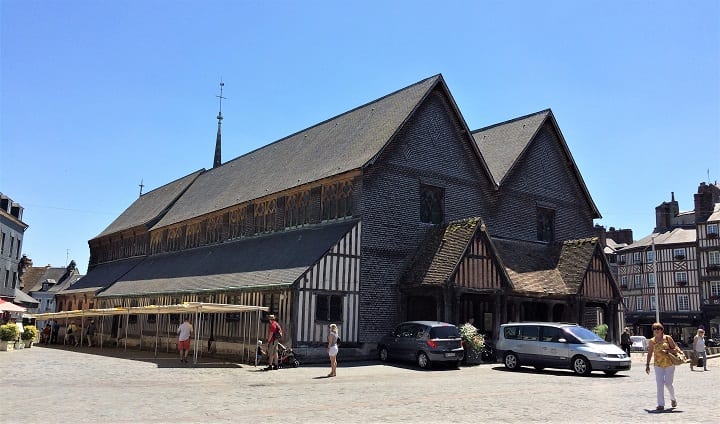 The bell tower is across the square. It was deliberately built away from the church so that parishioners would not be burnt if there was a fire. 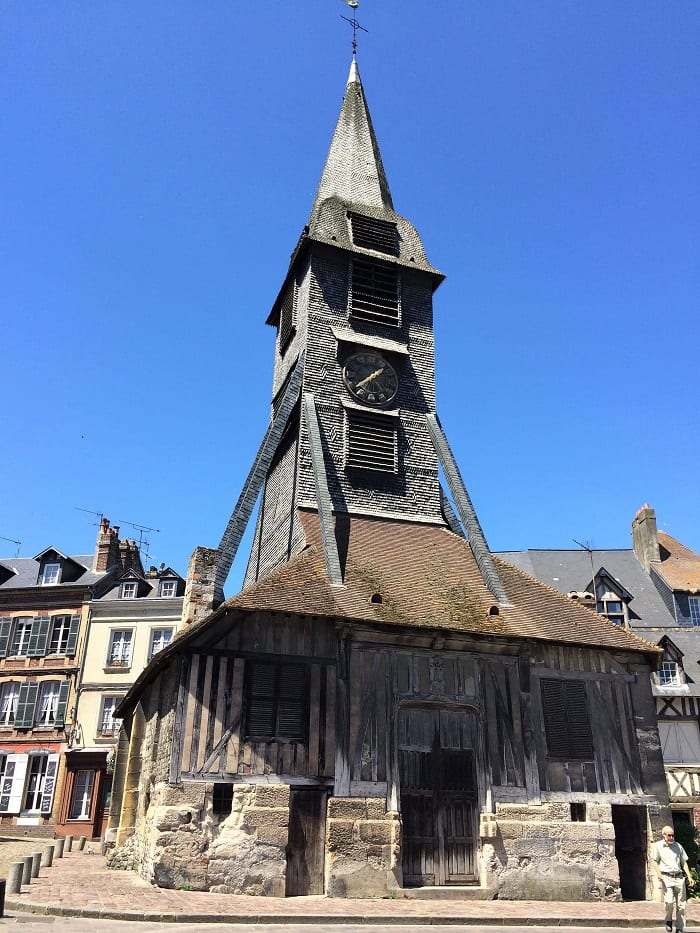 Leading up from the Place Sainte Catherine are more streets full of boutiques, craft shops and art galleries. Pottering about and finding some shade in this delectable area was such a treat. 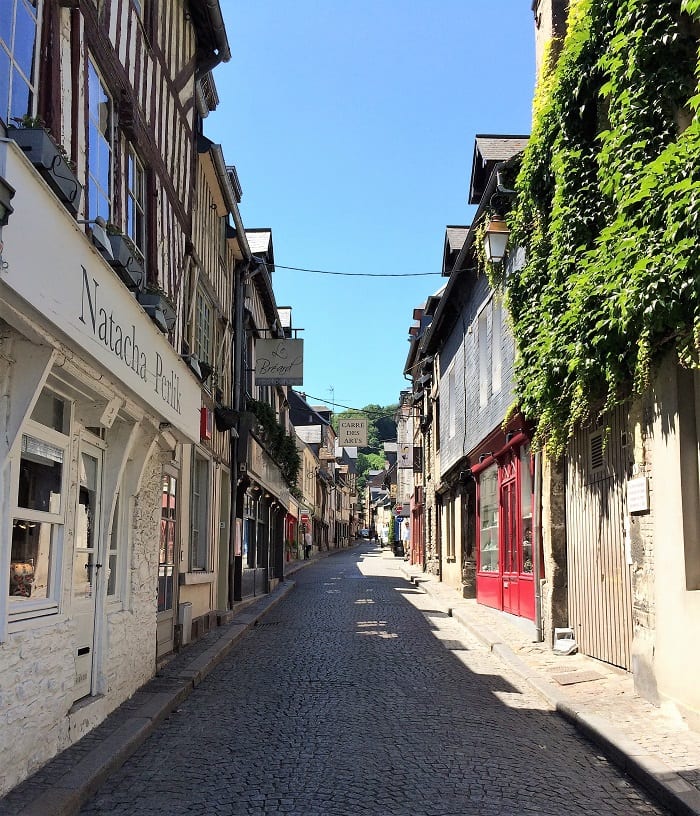 The cobbled streets of l’enclos, once a medieval fortress, are also a joy to wander around. We didn’t hunt out the famous salt warehouses, unfortunately, but just spotting a tantalising glimpse of a hidden world through an open gate was enough to remind me that Honfleur is definitely worth a second visit. I’d make sure it wasn’t a Tuesday as two museums I’d wanted to see, dedicated to painter Eugène Boudin and the fantasy world of musician Erik Satie, were both closed on Tuesdays. 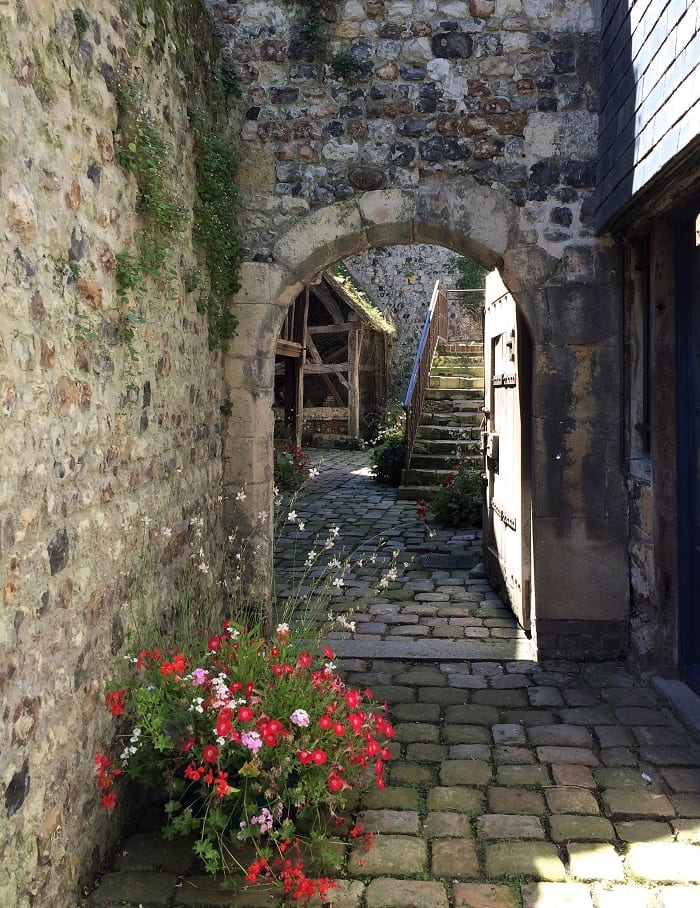 I do wonder, if we’d visited on a Wednesday, we might have spent so long in the museums that a scramble up the hill might not have been added to the agenda. But then we would have missed out on the breathtaking views across the estuary. We would also have missed the sign at the top of the hill which gave a touching description of the residents of Honfleur.

“The population of Honfleur, nestled at the foot of the Grace Hills, is protected by the Sainte-Catherine, Saint Etienne and Saint Leonard church towers. These inhabitants live in rhythm with the tide, close to their old basin {harbour}. They nostalgically dream about the great discoveries, navigators, painters, writers and poets that this magical place has always inspired. With the passing of time, the local community is increasingly proud of their city. They continue to protect it, so that the generations to come will always be able to enjoy this highly privileged corner of France.” 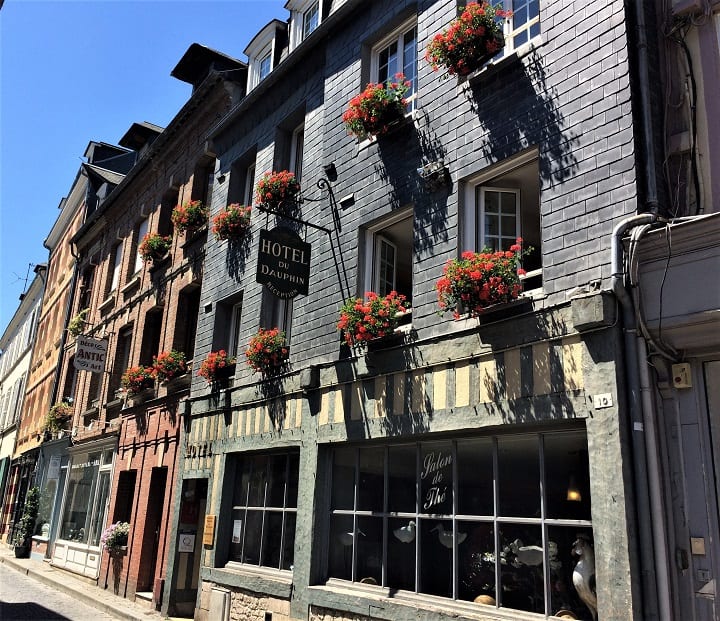 Other stops and excursions on our Seine river cruise were Versailles, Rouen and Monet’s garden.