You’ll be relieved to know we avoided getting soaked last night as the resort has a little shuttlebus; they picked us up and took us to the main building for some scoff then, as it was still lashing down, we got a lift back! What a result and what a very nice man he was too!

Today I am not going anywhere. My big breakfast is lying nicely above my waistband and doesn’t want to be disturbed. Hubby and son have hired a kayak and have paddled off into the distance so I can get my book out and do what normal people do on holiday….nothing! Have nicked an apple from the buffet but as soon as I bring it out, a rather large contingent of seagulls and ducks have moved towards me and it’s a bit scary; reminiscent of Alfred Hitchcock’s The Birds, which always gave me the heeby-geebies anyway. Surprisingly at 11am there are very few other sunbathers about; the Canadians are obviously not like the Brits and the Germans when it comes to nabbing a sunbed with a towel at sunrise. All very civilised, people coming and going (and taking their towels with them at lunchtime rather than marking out their territory for the whole day). 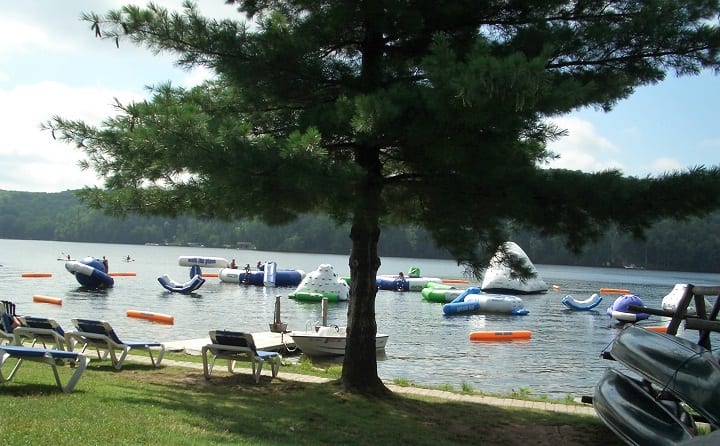 The boys return from their bit of boating and Dougie, quite impressed with his own ability on the water, and feeling a little like Ray Mears surviving a trip down the Amazon, decides to go it alone a bit later in a canoe. Rory and I think he’s gone a little crazy and whilst I return to my book and son retires to the room to watch the TV, Bear Grylls sets off again. He returns wincing an hour later; something about an old shoulder injury and bad back which I suspect we won’t have heard the last of this holiday. Bless him.

Have the most gorgeous meal in the posher restaurant tonight. Can’t believe how reasonable everything is here in Canada. With the Canadian dollar at a similar rate as the US dollar, everything is about half price. Petrol works out at about 60p a litre and the meals are such good value. The set menu in the restaurant, which would cost around 30 to 40 quid at home, is about £17 and with scallops, steaks, fancy lamb dishes and the most heavenly puddings, it would be a sin not to have all the courses.
“I think I’ll have the filet mignon”, says our 12 year old.
“Good for you son, fill your boots”, Dad replies.
August 2008