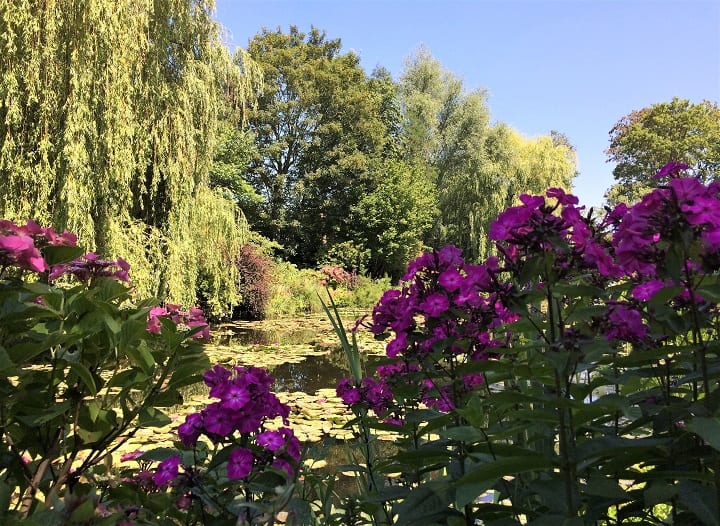 It was a hot, cloudless day at the end of June. Dougie and I had already spent the morning kayaking 15km on the River Eure, a tributary of the Seine. We changed out of our wet clothes and managed a quick bite to eat back on the cruise ship, which was moored in Vernon. The understanding U by Uniworld catering team had kept back a meal for us and our fellow kayaker, Sally, as we had missed the original lunch slot. Time was of the essence as there was a group bike ride to Giverny that afternoon, to see Monet’s garden. It would only take about half an hour but in the heat, and after a morning spent in the water, this was turning into quite a workout. And you thought river cruises were genteel holidays for old folk? Think again.

The U By Uniworld river cruises cater for the younger market but they let old codgers like us come along if we can last the pace. “Of course we can,” we scoffed, noting with a smile that none of the pretty young things had joined us in the kayaks that morning. There are, of course, more traditional excursions on this cruise, The Seine Experience (renamed Northern France at a Glance for 2019). We had spent a glorious afternoon in Versailles earlier that week and were given plenty of sightseeing time in picturesque Rouen Honfleur and, of course, Paris.

Is summer the best time to visit Monet’s garden?

The afternoon wandering around the Fondation Claude Monet was a highlight of our trip but on a warm summer’s day, it was rather busy. However, early summer could be the best time to see many of the flowers in bloom, so if you can accept the crowds, you will be rewarded with colourful floral displays. But we were too late for the wisteria on the bridges. I suspect every season will showcase different aspects of Monet’s garden so you won’t be disappointed at any time of year. 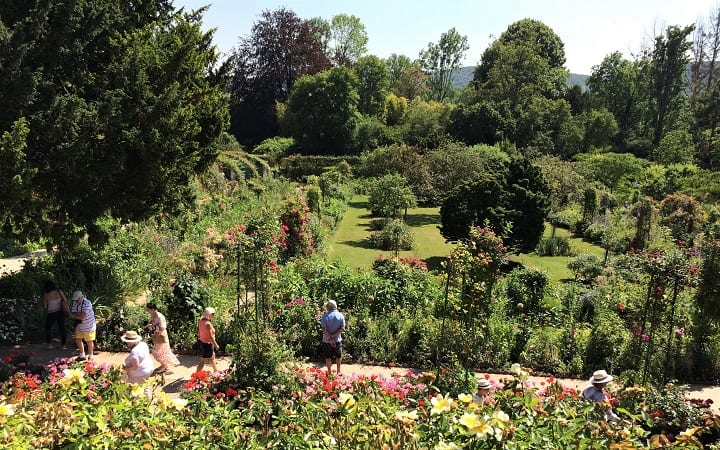 We had a guide to show us around but this felt even more crowded so we slipped away and were soon able to find quieter parts of the garden, to appreciate the beautiful reflections that inspired Monet to create some of his best known impressionist paintings. 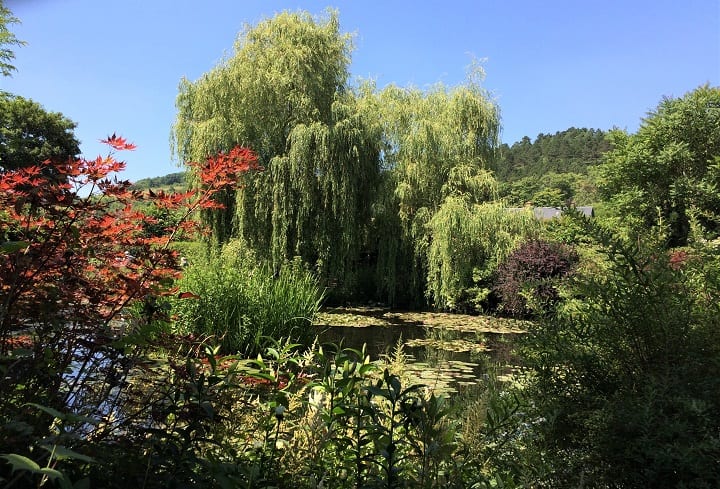 A little background information might help at this point. Monet and his family settled in Giverny, Normandy, in 1883 and he lived there for 43 years. There are two parts to the gardens. The Clos Normand is a flower garden closest to the house and the Japanese-inspired water garden can be reached via an underground passageway. Monet not only designed the grounds; he also was instrumental in the decoration of the house.

Monet was keen to design a simple flower garden, with flowerbeds at different heights to create volume. He chose fruit and ornamental trees, climbing roses and and abundance of annuals for a blast of summer colour. He chose common flowers such as daisies, tulips, daffodils and and poppies as well as rare varieties. 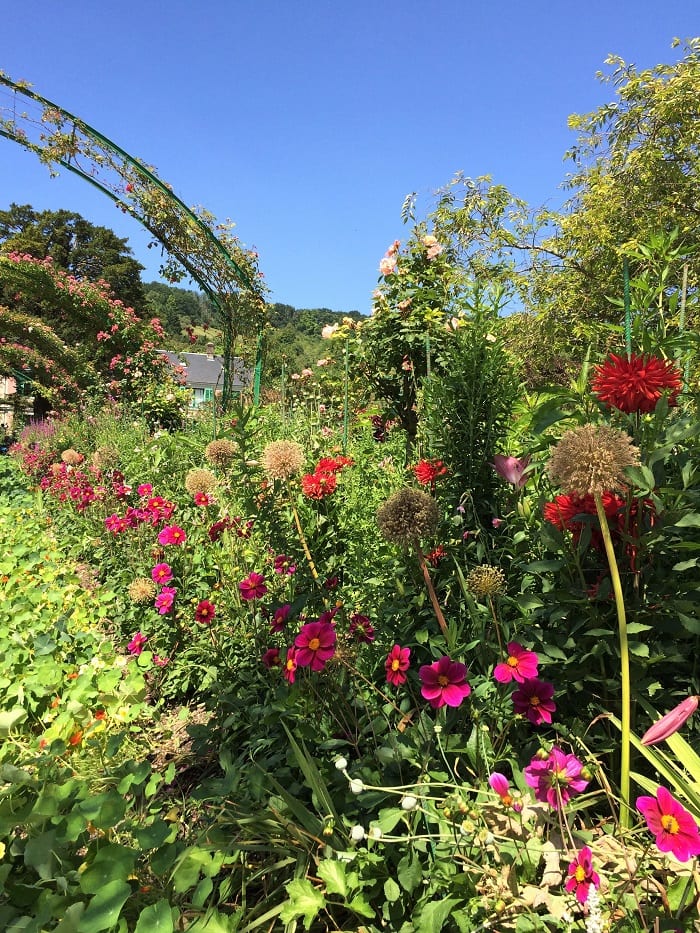 Along the central path there are metal arches for climbing roses. There’s a neatness and regularity about the beds in this part of the garden but the flowers themselves do seem to have been given space to freely bloom. Some beds feature specific colours, like an artists’ palette. 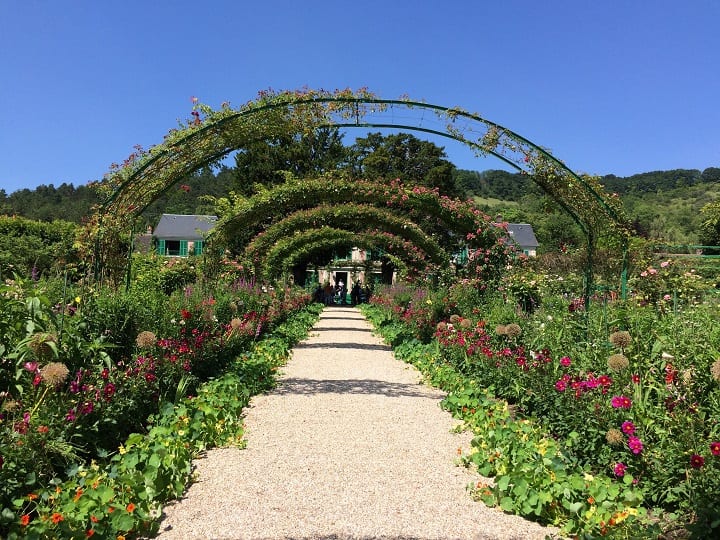 In 1893 Monet purchased land next to his property on the other side of a railway line. Despite neighbours’ objections, he soon dug his first pond. Once filled with water he was keen to embellish the pond with flowers. “I just took a catalogue and chose at random, that’s all. ” 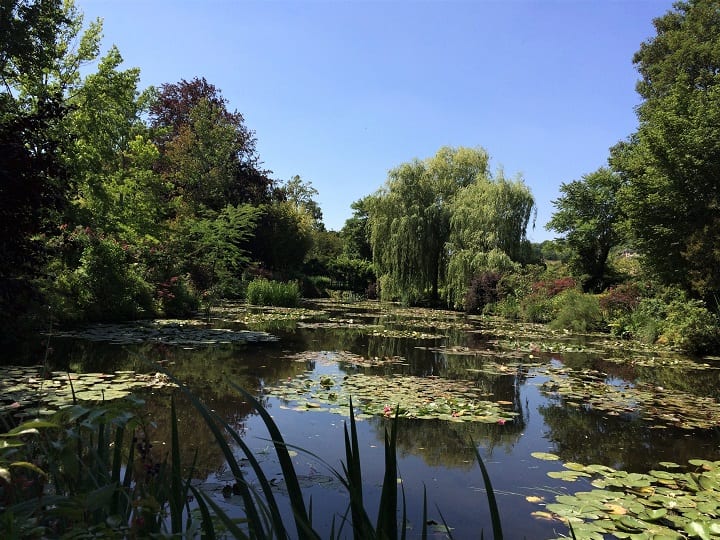 He chose well as the water lilies (nymphéas) and the reflections of the plants in the water became the focus for many of his paintings that can be seen in galleries all over the world. He loved the curves and asymmetry of this garden, inspired by prints of Japanese gardens that he collected. Bamboos, maples and weeping willows were planted by this keen gardener.

I didn’t get a decent photo of the famous Japanese bridge but here’s my husband standing on it, looking surprisingly at home in this French jardin with his jaunty beret and linen shirt. Put a paintbrush in his hand and let’s see if he can rustle up a masterpiece. 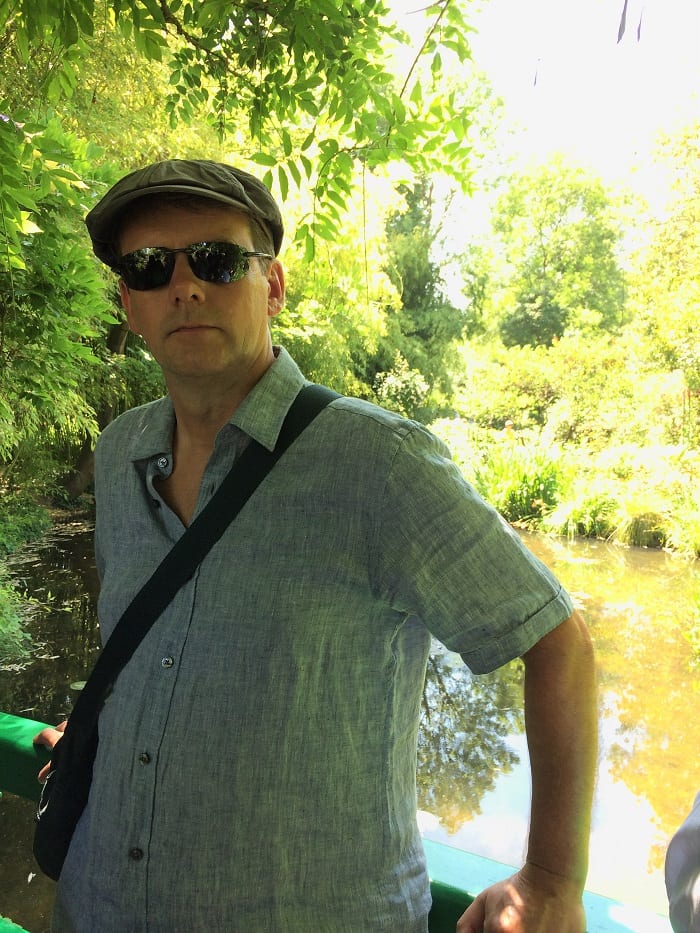 Originally known as the House of the Cider Press, Monet’s home was extended widthways, after it was purchased, probably because the couple had eight children and needed more space. It was repaired in the 1970s and has been open to the public since 1980. It really is a joyous building, Monet choosing the colours himself, often at odds with what was fashionable at the time. 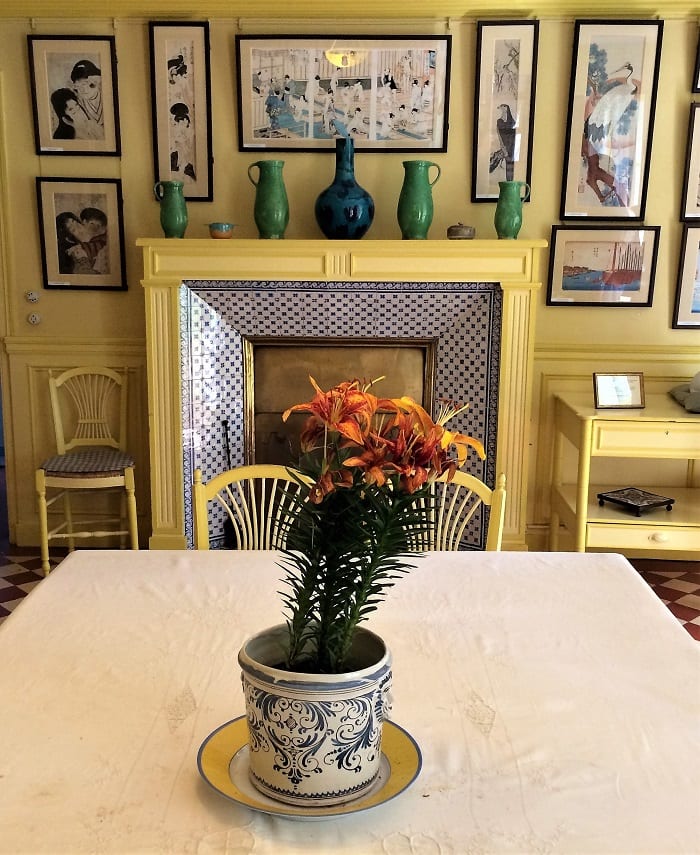 The vivid yellow dining room, decorated with Japanese prints, is a wonderful bright room. It looks so fresh and comfortable, you could easily forget that the furniture and ornaments are treasured originals. When we were walking through the room, one lady decided to take a seat at the table. She was soon back on her feet after a shrieked “Madame! Non!” from the horrified security guard. 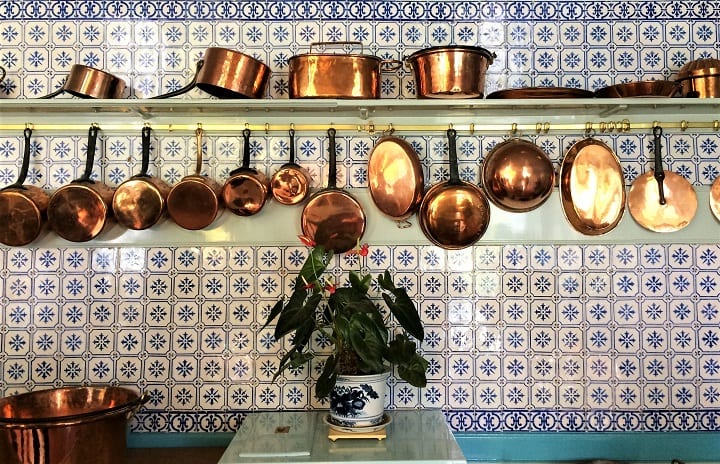 The blue kitchen, decorated with tiles from Rouen, was designed to work in harmony with the dining room. It has the most gorgeous collection of copper pans. I’ve not seen such well-scrubbed copper since we visited Culzean Castle in Scotland.

I’m so glad that, as we left Monet’s garden and pedalled back to Vernon, we parked our bikes and stopped for a cider in the garden of the Hôtel Baudy. We read the menu and learned the history of this charming little inn. In 1886 an American artist, Willard Leroy Metcalf, entered the buvette-épicerie (café/general store) looking for a place to stay. Owner, Madame Baudy, had no room and was terrified by this “strapping fellow, a vagabond type who expressed himself in incomprehensible gobbledygook.” He left but returned several days later with three other painters. This time Madame Baudy gave up her room and Metcalf learned that Claude Monet was living nearby. News spread of Monet’s whereabouts and every weekend a train of “cheerful bearded artists” arrived from Paris and headed to the Hôtel Baudy because of its “ridiculously low prices”. 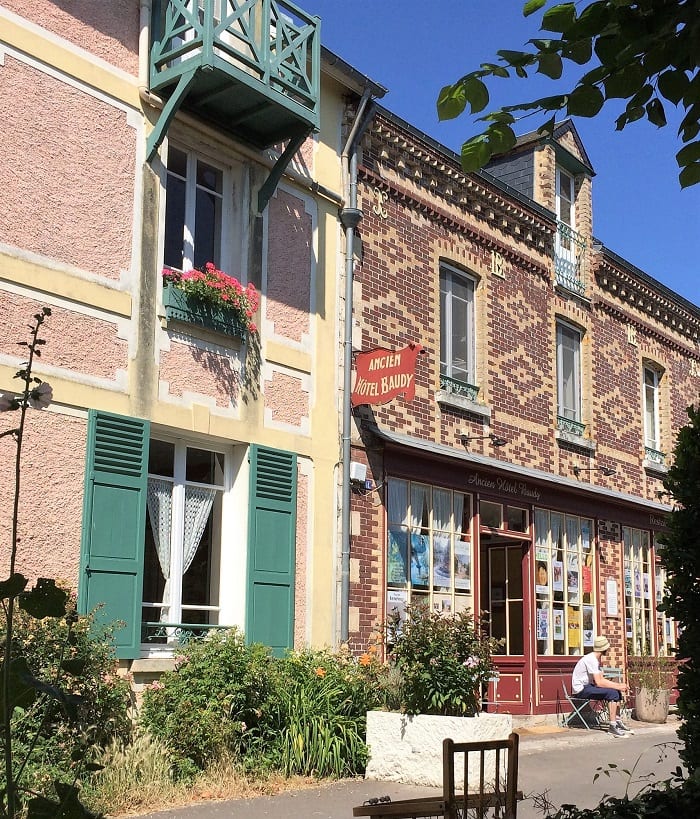 An artists’ studio was established in the garden and many paintings were offered in lieu of payment. Visitors included Renoir, Rodin and Sisley but mostly it was a place for American artists such as Sargent, Robinson and Cassatt. It soon became known as the American Painters’ Hotel.

As we left Giverny and headed back to our ship, it was extraordinary to think this little village in Normandy was the inspiration for so many artists. Monet made it his home but he encouraged other painters to spend time with him so they would be equally enchanted by its charms. Today, the 500,000 annual visitors would suggest it is still as captivating as ever.

Pin it for Later: Claude Monet’s garden in Giverny in summer 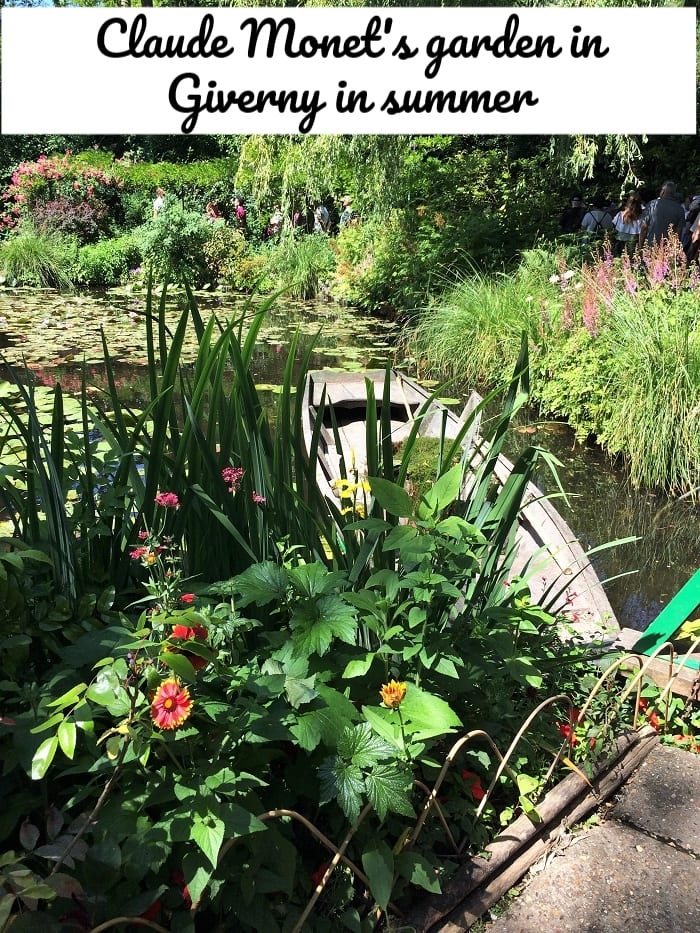 Read about our other excursions on the cruise: Rouen, Honfleur and Versailles