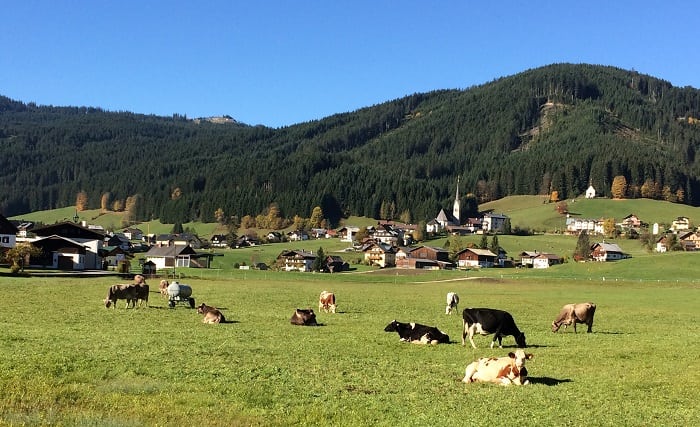 After our 20km walk the previous day, we had three options for the following two days in Gosau. Thankfully one of the suggestions from Inntravel was an easy 10.5km circuit of the valley. We chose this one. It was a Saturday so we had a bit of a lie-in, a gorgeous Gosauerhof breakfast, then spent a few hours rambling round the pastures and woodland around the town. We felt like we had been dropped into a Milka advert or one for The Laughing Cow – it was all lush green meadows and cowbells. We walked past beautiful, small churches, had a bit of lunch, then scuttled back to our hotel to take up residence on the terrace for beer and apple strudel. We told ourselves this was therapeutic, that our legs needed some rest and we had some books that we fancied reading. 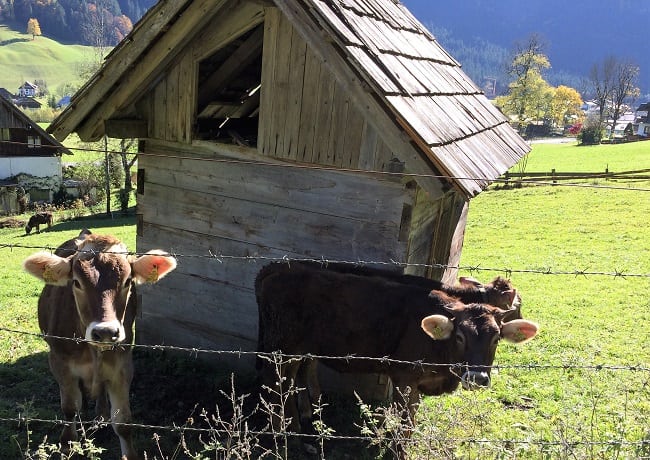 Come Sunday, we were up with the larks to catch the Postbus to the Gosaukammbahn, the cable car which would take us up to the Zwieselalm mountain range. This area is also called Dachstein West. Earlier in the week we had climbed in the Dachstein Salzkammergut mountains, in the east. The whole length of this spectacular mountain range marks the southern border of the region of Upper Austria.

It was another glorious day in Gosau. We really couldn’t quite believe it and I was wishing, not for the first time, that I’d brought a pair of shorts and more T shirts rather than a case-full of merino wool thermals. As we left the cable car at the top of the mountain we could have opted for a short but slightly tricky hike to Stuhlalm but that involved a “vertiginous and partly scree-filled path where firm footing and a steadying hand need to be applied”. I bottled it and we chose a longer but easier hike instead. 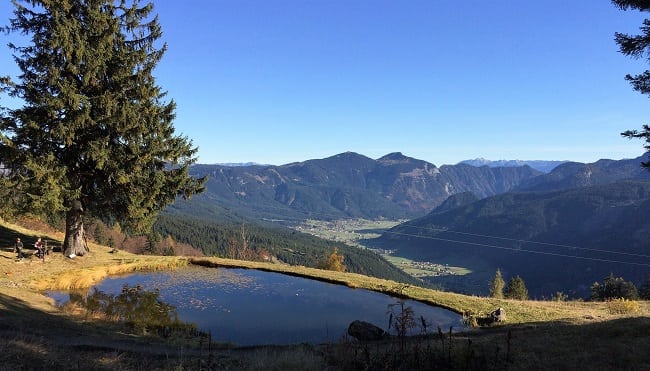 There are always a number of mountain huts for refreshment stops but at the end of the season they’re not all open. There was a notice saying the Zwieselalmhütte was closed that day but that another one, the Rottenhofhütte, was open. Now we had a dilemma. The Rottenhofhütte wasn’t mentioned in our Inntravel walking notes but there were proper signposts to it and it was graded as an easy/intermediate walk. As it was too early for lunch at the cable car upper station and too early to consider just walking down again, we decided to crack on towards the Rottenhofhütte, an hour away.

There didn’t seem to be anyone else on this walk and as the temperature rose, I started to whinge.

“Will this rotten hut actually be open”, I grumbled to Dougie.

“It says it is,” replied my confident husband. “When have these Austrian signposts ever been wrong this week?”

It felt a lot longer than an hour and I was now wishing I’d pinched some food from the breakfast buffet. We carried on, despite not being able to see any hut in the distance. Eventually we walked round a bend and could see the roof of a building nestling in a gentle hollow. The rotten old hut existed and, miraculously, it was open. Plus, there were people eating and drinking outside. Where on earth had they come from? The opposite side to us, my intuitive partner suggested. 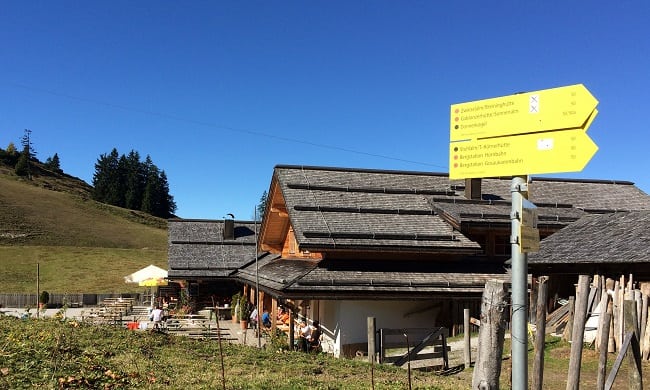 It was such a pretty hut and I nearly hugged the owner as he came to take our orders.

“Noodle soup for me!”

“Would you like sausages in your soup?” he asked me.

This is what arrived. 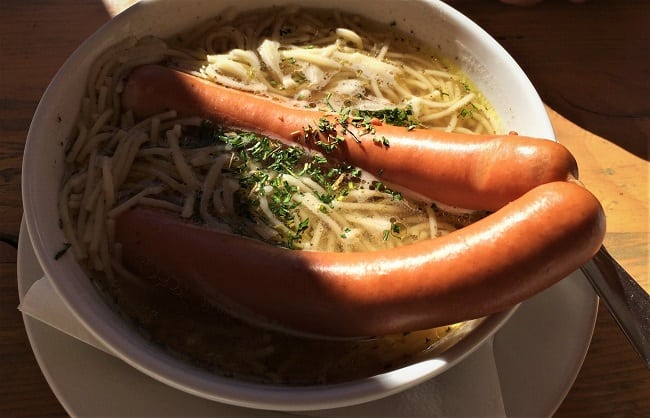 Readers, I ate it. With gusto. We glugged a pint of apple juice before leaving our beloved – not rotten at all – hut to head back down the mountain. Of course, it took us another half hour or so before we reached the Herrenweg, the path that would wiggle its way back to Gosau. Dougie reckoned it would take us two hours from there to descend the 700m but the Inntravel notes said about three. Guess who was right? 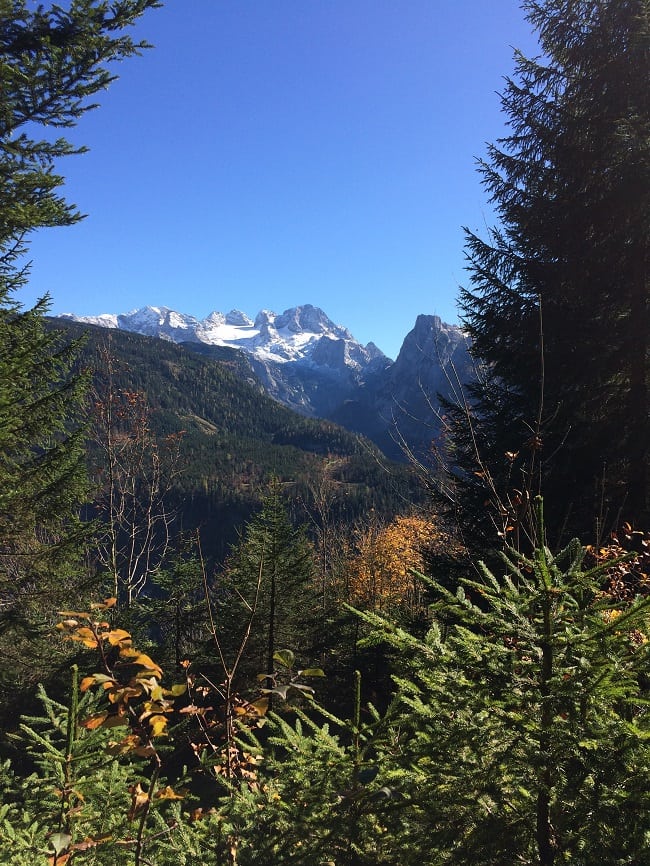 Three hours later, after a walk crossing slippy streams and tree roots, through woods and open pastures, we finally reached the hotel. Another kaffee und kuchen fix, a long shower, then congratulatory schnapps and wine to accompany our last meal in the mountains. The next day we would be packing our walking poles, meeting Markus the taxi driver again, and heading to Salzburg. The city awaits…

Here are the links to my other posts about the Inntravel Lakes & Mountains walking holiday:
St Agatha
Hallstatt
Dachstein Mountains
Gosau Lakes