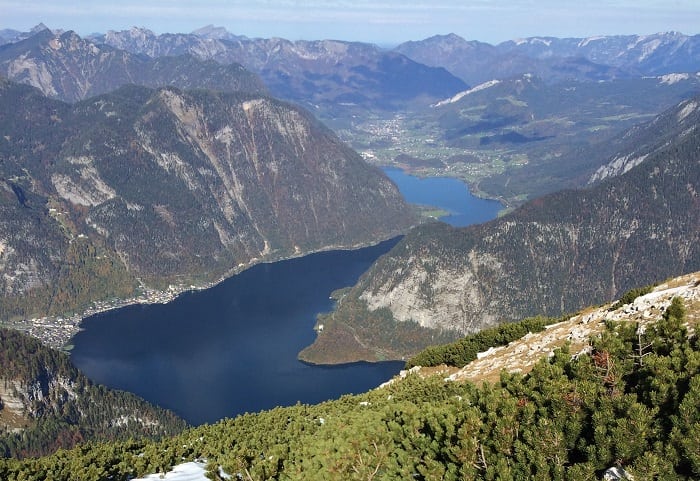 “I don’t think we’ll need our poles today; it will probably be one of our easy walks.”

Famous last words from my husband as we set off on Day Three of Inntravel Lakes & Mountains walking holiday in Austria.

One of the reasons we chose this particular holiday was the fact that there were often a number of options each day, allowing us to choose a walk depending on our interests, fitness level and how much cake we’d consumed the day before. On this day, whilst staying in Hallstatt,  we could have chosen Option A, a visit to the salt mine museum in the town, which involved a funicular ride up and a walk down. Tempting, but when Option C suggests, in bold, ‘Take the Krippenstein Five Finger Challenge’ – well, there’s no contest.

Named by CN Traveller in 2012 as one of the best viewing platforms in the world, the five fingers (or should I say, 5fingers, as we cool dudes refer to it) jut out 400m above an abyss, at the top of the Krippenstein mountain which is itself over 2000m high. Would Dougie and I dare to walk out on one of the metal fingers?

Before we tackled the 5fingers challenge we had to hop on a bus to reach the cable car station at the bottom of the mountain, which is part of the Dachstein Salzkammergut UNESCO World Heritage Site. With instructions on when and where to find the Postbus in Hallstatt, we were soon on our way round the southern edge of Hallstättersee to Obertraun. In winter this area is a ski and snowboarding destination, with 30km of off-piste areas and Austria’s longest descent of 11km. When the snow disappears, the mountain has a wealth of attractions including caves, nature walks and a shark. Yes, that’s right, the Dachstein shark, on top of a mountain.

The middle station on the cable car serves the Schönbergalm nature park, a really pretty area with adventure trails for children. It’s here you sign up for guided tours of the Ice Cave and the Mammut Cave which is a huge limestone cave. Unsure how much time we would have, and keen to make the most of the fantastic weather, we opted for the Ice Cave tour first and waited to see if we could fit in a tour of the Mammut cave later in the afternoon.

Trish’s top tip of the day – give yourself plenty of time (at least 15 minutes) to reach the entrance to the Ice Cave before your designated tour time. Honestly, there we were thinking once we had used the cable car to make the ascent, everything would be a breeze. It was quite a steep climb up the path to the entrance and I was pretty puffed out when we reached the top. I was wrapped up warm for the -3 degrees inside the cave, but was peeling off layers like a menopausal onion.

The ice caves were discovered in 1910 and are very impressive. I’m used to seeing stalagmites and stalactites in limestone caves, but to see ice sculptures underground is fascinating. It isn’t scary or claustrophobic as each room – Gralsburg, Parsivaldom and King Arthur’s Cathedral – feels spacious. But it is cold and my second tip of the day is to take gloves as the hand rails are wet as well as cold. The tour lasts about 50 minutes and is very educational, in English and family-friendly.

The second cable car soon carried us high up to the summit of the Krippenstein mountain and here we stepped into the snow for the first time. Although the cleared gravel paths made it easy to walk to the 5fingers platform, there were a couple of icy patches on the ground. Dougie managed to find one of them and did a spectacular splat, arms and legs outstretched like an upside-down snow angel. He wasn’t hurt and, thankfully, wasn’t seen either.

You’ll be pleased to know, we did accept the Five Finger Challenge, trying each one out, even the ridiculous one with the selfie frame at the end. The views were sensational ( see the photo at the top of the page). We could see Hallstatt to the left of the lake and even, in the far distance, St Agatha and Bad Goisern, where we had begun our holiday earlier in the week. 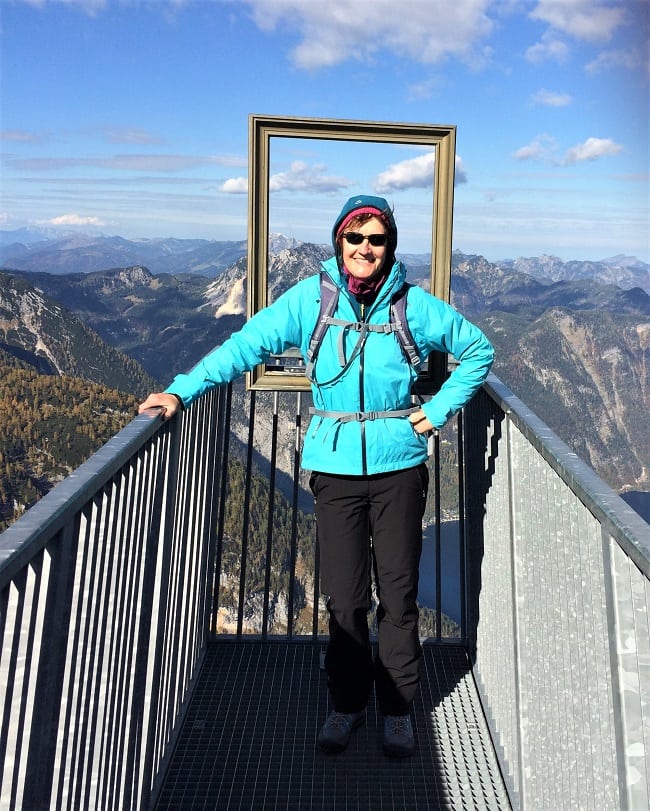 After that adrenaline rush, we found wooden, curved, relaxation couches on the mountain so we put our feet up and gasped, in awe, at the scenery. 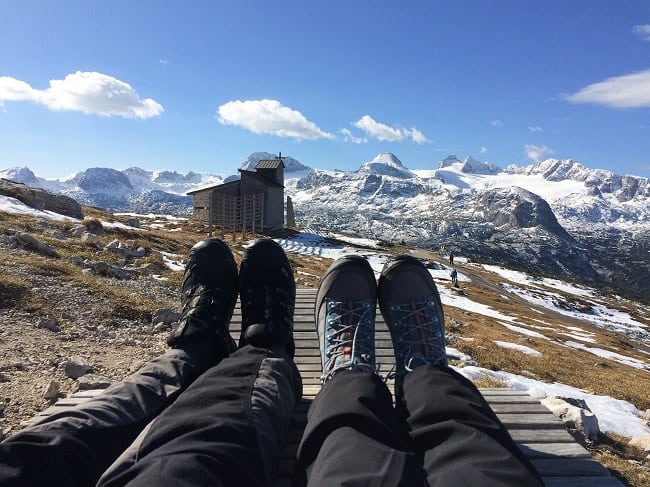 We popped into a tiny chapel, which has also been constructed on the mountain, before heading to the very summit where the viewing platform indicated the direction of famous places in the world. I nodded towards Stonehenge.

Dougie and I then had our usual awkward brush with technology, trying to figure out how to work the automatic photo point. We knew we had to press a button and wait for a light but had no idea where we should stand. After gurning at the machine for some time, I realised the camera was focused on a point a few meters away. We persevered, pressed the button, ran into position and smiled – well, I did anyway. I forgot all about this photo until yesterday when I looked on the website to see if it was there. Success! On 12 October, around noon, were two shots with no-one in them, then part of Dougie’s head and then, the piece de resistance, our summit selfie!

This triumph deserved some reward in the form of lunch at the new mountain restaurant. Sitting outside, in the extremely warm sun, we feasted on two soups. A meaty goulash one for Dougie and a fabulous clear beef soup for me, which was served with traditional semolina dumplings (nothing like school-dinner semolina). The metal can, with a ladle, was left for me to serve myself as I supped. 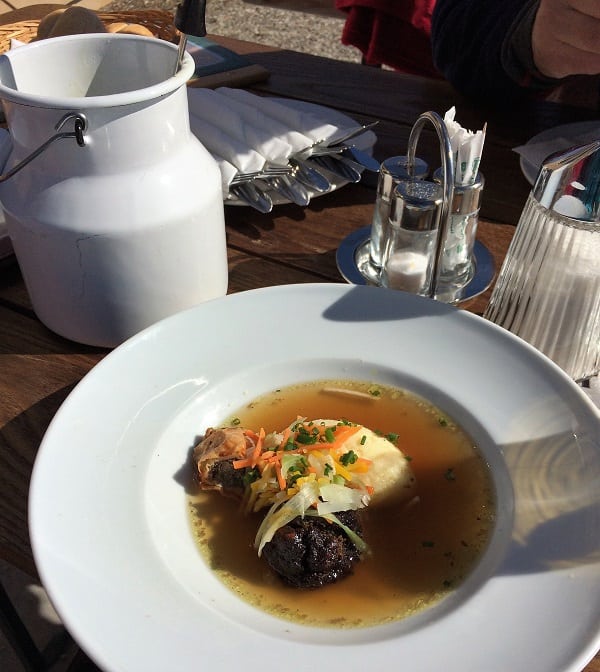 We had two choices for the rest of the afternoon. Head back down to see the limestone caves or head out into the snow to hunt shark? The shark won the day although we would need to tackle part of the Heilbronner circular trail in order to see it. I imagine this walk is fairly easy in the summer, especially as the directions suggested the shark is a mere 30 minutes away. With fairly thick snow in places, the going was heavy, though undeniably beautiful. 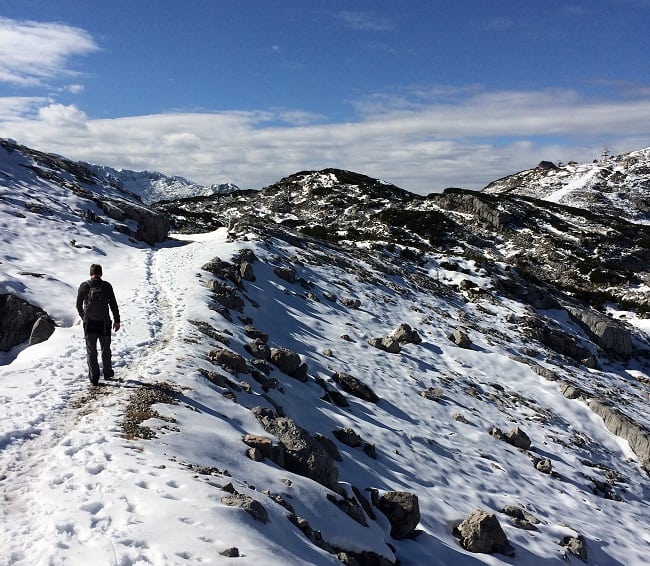 The huge metal fish was eventually located and Dougie was ordered to clamber up its rear end to take a photograph through the jagged teeth. 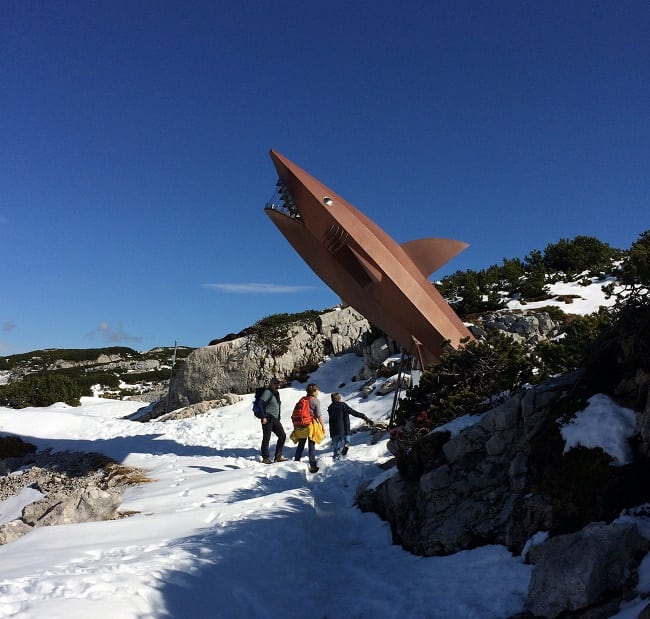 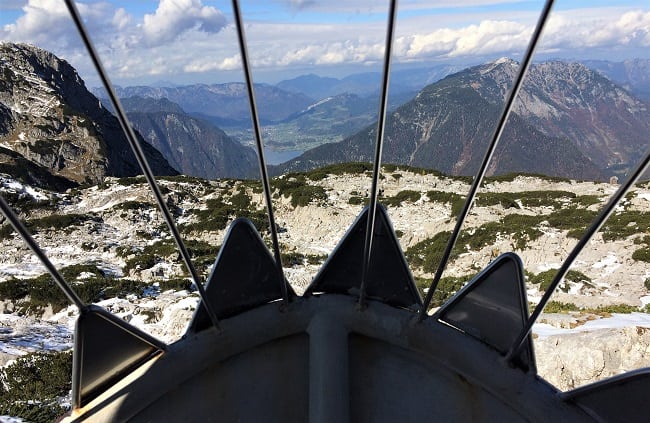 It had been a extraordinary day in the Dachstein mountains – tiring, mind-blowing, funny, slightly scary but truly unforgettable. The Postbus was due so we took the next cable car back down to the base station and headed back to Hallstatt.

“We could still make the salt mine museum if we crack on?” Dougie suggested.

“There’s a cake at the Maislinger bakery with my name on it,” I replied. “Sugar beats salt at this time in the afternoon, especially in Austria.”

Tickets and Prices for the Dachstein Salzkammergut 2017

Tickets for the mountain attractions vary from 30 euros for a panorama ticket (adult ticket for all cable car rides, viewing platforms and trails) to 44.40 euros for an all-inclusive ticket (adult ticket for cable car rides, viewing platforms and both guided tours of the caves). There are also reduced prices for children, students, seniors and family groups. Thank you to the Dachstein Traunsee Tourist Office for providing Dougie and me with complimentary all-inclusive tickets for our day on the mountain.

Links to other posts from our walking holiday