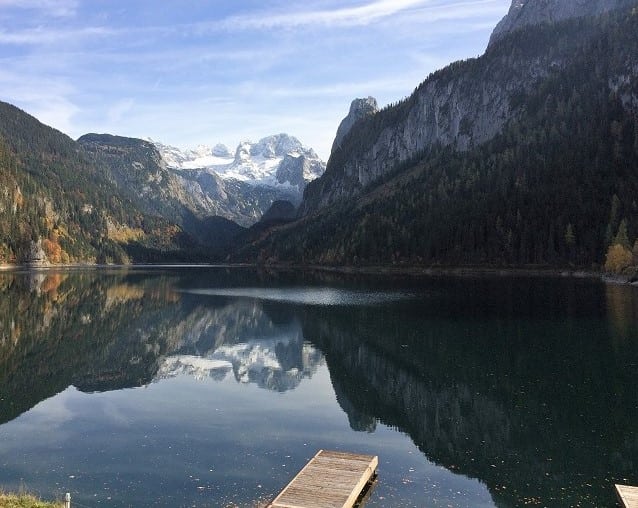 Our bags were packed ready for their onward journey to the next hotel. They were very excited about this, as cases often are, but not half as thrilled as we were because this time we were going with them. We parted company at the edge of the Vorderer Gosausee, the lower lake south of the town of Gosau. Markus, our taxi driver, was taking our luggage to the Hotel Gosauerhof where we would be reunited later that afternoon. But first we had some walking to do.

Markus had obviously taken many Inntravel guests to this spot and he asked us what route we planned to take. The standard route involved a walk around the lower lake followed by a ramble along the valley floor to the town of Gosau; a distance of 12.5km.  Previous Inntravel guests recommended an extended detour to the upper lake, Hinterer Gosausee, before our return. We told Markus of our plans and he smiled, congratulating us for tackling a 20km walk that day.

“What’s he talking about?” I whispered to Dougie as we climbed out of the taxi. “It’s not as much as 20. I think he’s got his wires crossed.” 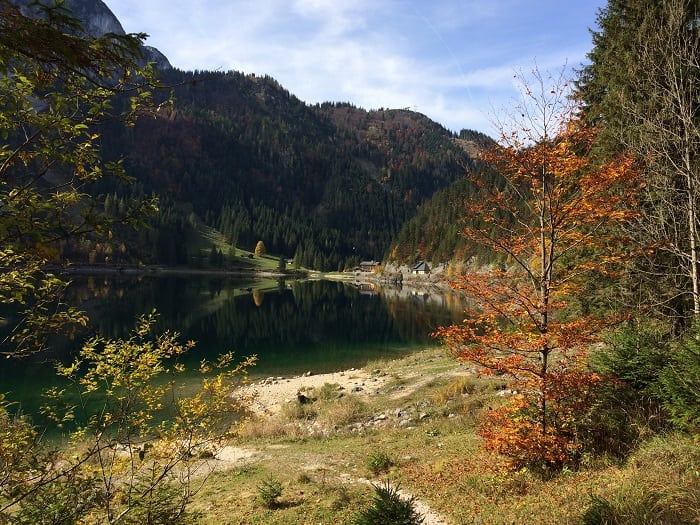 We couldn’t have picked a better day for it. There wasn’t a breath of wind and the sun was already feeling warm. Autumn had definitely arrived in Gosau as the paths were strewn with russet and gold leaves.

It didn’t take very long to reach the southern end of the lower lake so we were keen to press on. The route did get tougher. I suppose the clue is in the name: ‘upper’ lake. We passed, and were overtaken, by a few walkers who definitely looked ‘seasoned’, confidently striding with their walking poles. The Dachstein mountains towered above us, accompanying our every step and urging us on when the ascent became a little steeper. We had a couple of rest stops to catch our breath but the timing was impeccable: we reached the upper lake at lunchtime, as the sun peeped through the trees and welcomed us to this mountain oasis. 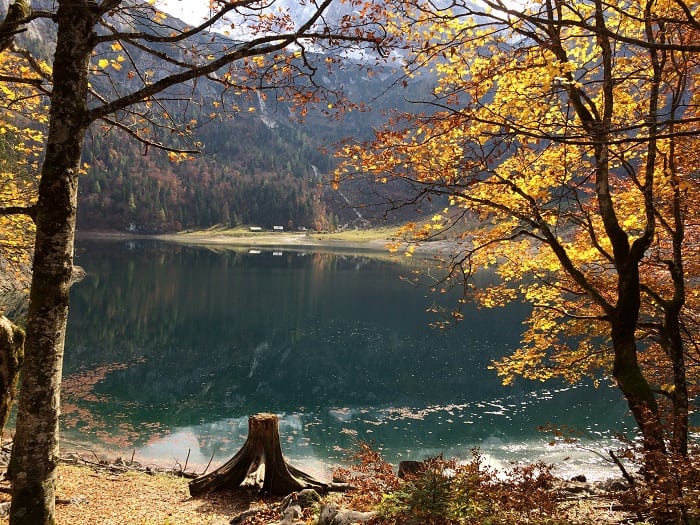 The mountain café had already shut for the season but we came prepared with an emergency KitKat from home, bananas from the hotel bedroom and a couple of stolen rolls and honey from the buffet breakfast. I don’t usually make a habit of swiping food from hotels, and definitely not small, independent establishments, but sometimes needs must. We found a bench by the lake, consumed our filched fare and then pinched ourselves to check if we really had reached this breathtaking spot. 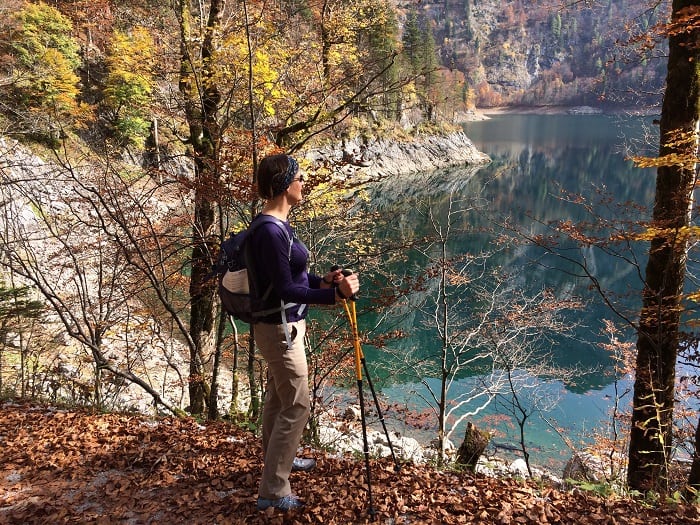 We were actually quite sad to leave this idyllic lake but we had a long walk ahead of us, so we strode on. The route seemed simple enough and we were never exactly lost, but we didn’t quite follow the instructions. The Panoramaweg is well signposted, and is located a little higher than the valley floor. It crosses streams and wiggles through the woods but you can always see the town of Gosau through the trees so you can’t go wrong. Our only problem was the fruitless search for a sign to the Gasthaus Echo. We doubled back a couple of times to look for it and it was only on a walk on the following day we realised the sign must have been removed and the elusive Gasthaus Echo was shut for the holidays anyway.

We found a route through the trees and down to the town, picking up our walking notes to guide us to the Hotel Gosauserhof. This was probably our favourite hotel from the whole trip because of the hospitality. Owned by the Laserer sisters and their families, the welcome we received was warm and motherly. It was as if we were members of the family, just arriving home after our day’s hike. Lots of fussing and ‘oh you’ve had a long day’ exclamations. 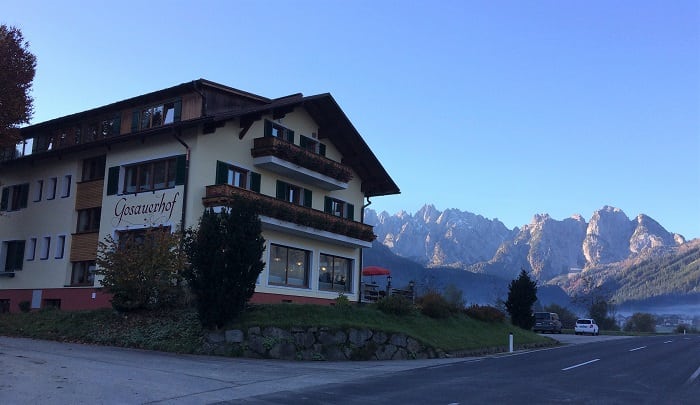 We had seen locals in St Agatha and Hallstatt wearing traditional lederhosen and dirndls but in Gosau it seemed to be de rigeur, especially at weekends. The owners and other staff were all dressed beautifully in traditional dress and throughout our three-night stay we watched dozens of similarly-dressed families turn up at the hotel for meals. Elderly ladies looked pretty and youthful in their puffed sleeves and ample skirts; older gentlemen terribly smart in jaunty hats and natty jackets. The younger generations followed suit, usually opting for a contemporary twist.

The hotel is in a perfect spot, with views of the surrounding meadows and mountains. It has a wonderful terrace which faces south-west and is the focal point for pre-sunset drinks. As soon as we arrived we found a table and ordered two large glasses of local ice-cold beer. It was like nectar. I don’t think we moved much for a couple of hours, basking in the mid-20s sunshine and people-watching behind sunglasses.

The food at the Gosauerhof was splendid: large portions of superb regional specialities. During our stay we feasted on a variety of home-made soups, fresh trout from the lakes and hearty meat dishes such as beef with prunes and almonds. Puddings were a delight: warm apricot pancakes and the ubiquitous and calorific apple strudel. And of course, they did afternoon Kaffee und kuchen extremely well too. 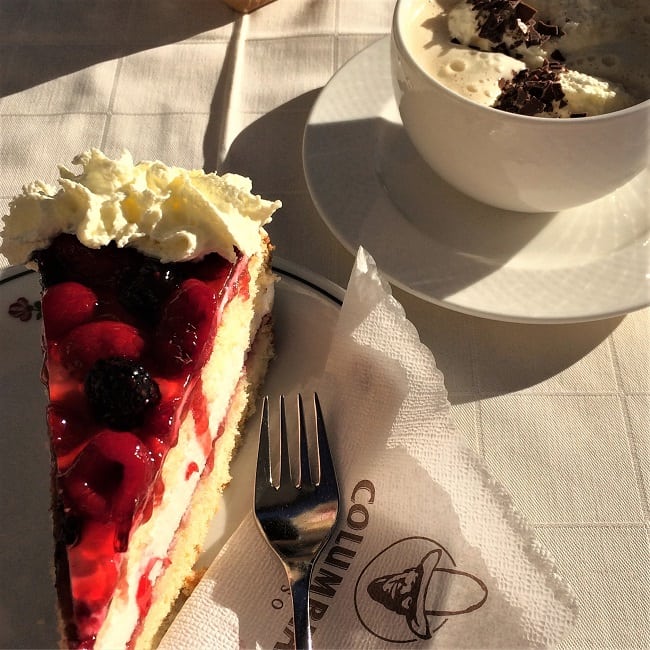 On our first night, as I wrote up my notes from the day, I looked again at the distances involved. 20 km, give or take a few hundred metres backwards and forwards looking for a non-existent sign. Markus, our taxi driver, was right. No wonder his smile that morning had been accompanied by a twinkle in his eye.

Here are the links to my other posts about the Inntravel Lakes & Mountains walking holiday: