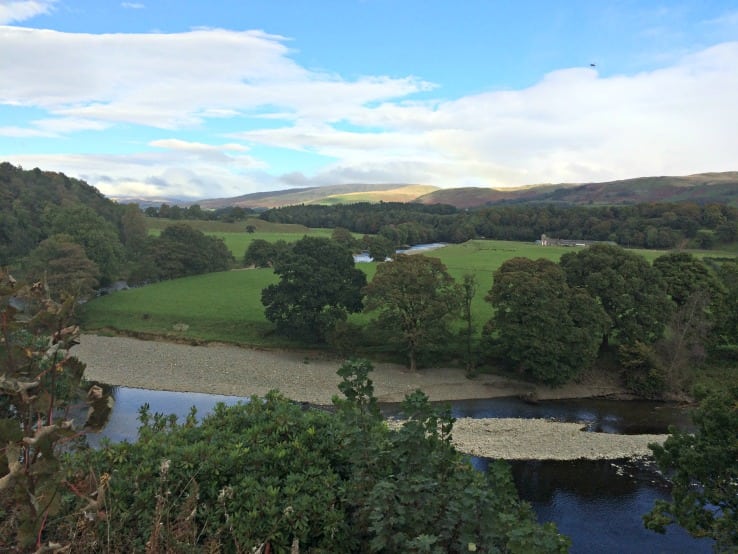 In 1822 JMW Turner painted this view of the Lune Valley from a spot just behind St Mary the Virgin church in Kirkby Lonsdale, Cumbria. Art critic and social theorist, John Ruskin, was moved to write, “I do not know in all my country, still less in France or Italy, a place more naturally divine.” Later, in 1875 he said it was ‘one of the loveliest views in England, therefore in the world.”

The weather wasn’t quite perfect enough for my photograph of ‘Ruskin’s View’ but there’s no denying it is a pretty vista; the meandering River Lune in wooded countryside with hills of the Yorkshire Dales in the distance.

Kirkby Lonsdale is a picturesque little town, nestling in between the Lake District and the Yorkshire Dales. We had arrived in time for lunch and were spoilt for choice, opting for the warmth and cosiness of the Lunesdale Bakery for some Scotch Broth and thick slices of freshly made bread.

Having admired the view from Church Brow we took the Radical Steps down to the river. 86 steps, oddly sized which makes walking down them a little difficult as it’s hard to establish a rhythm. They were called the Radical Steps because of the political leanings of Francis Pearson, who built them in 1820. Pearson had obtained an order to divert a public footpath that ran through his garden: the steps replaced the path. Was Pearson the first NIMBY or have they always existed?

At the bottom of the steps, we followed the river Lune along a path which has recently been made even more accessible for walkers. The sun came out and streamed through the branches of the nearby trees to create rippled patterns on the water. 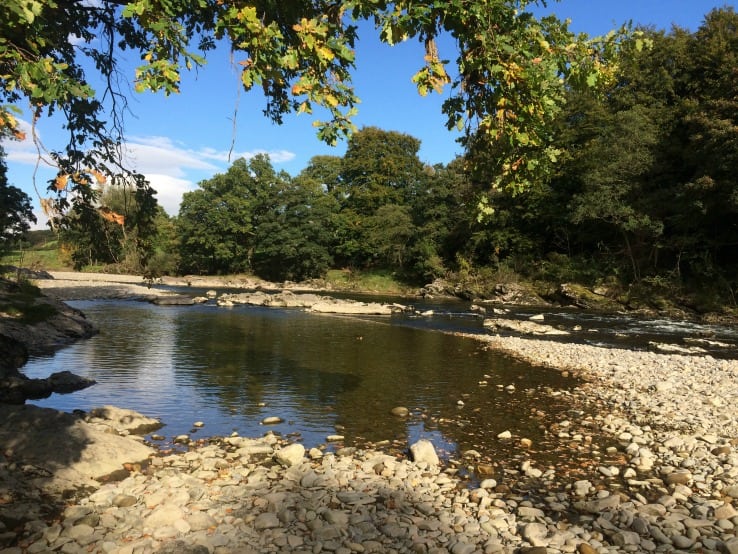 Following the river further round, the next view we spied was of Devil’s Bridge. Legend has it that the devil appeared to an old woman and agreed to build a bridge across the river in exchange for the first soul to cross it. Fortunately she was a wise old bird so, when the bridge was complete, she threw bread down so that her dog chased it onto the bridge, therefore outwitting old Lucifer. I suspect the real history of the bridge is that it was constructed in 1370 by the monks of St Mary’s Abbey in York but why let the truth get in the way of a good story.

I wonder if Ruskin had walked along to Devil’s Bridge whether he would have preferred this view. Of course he wouldn’t have seen the bright scarlet additions to the scene as we did. This spot is a favourite with scuba divers and kayakers because of the easy access and deep pools on this stretch of the river. Dougie and I spent a while admiring the view and watching the efforts of the red and black visitors who took turns to swim and scramble from one bank of the river to the other. 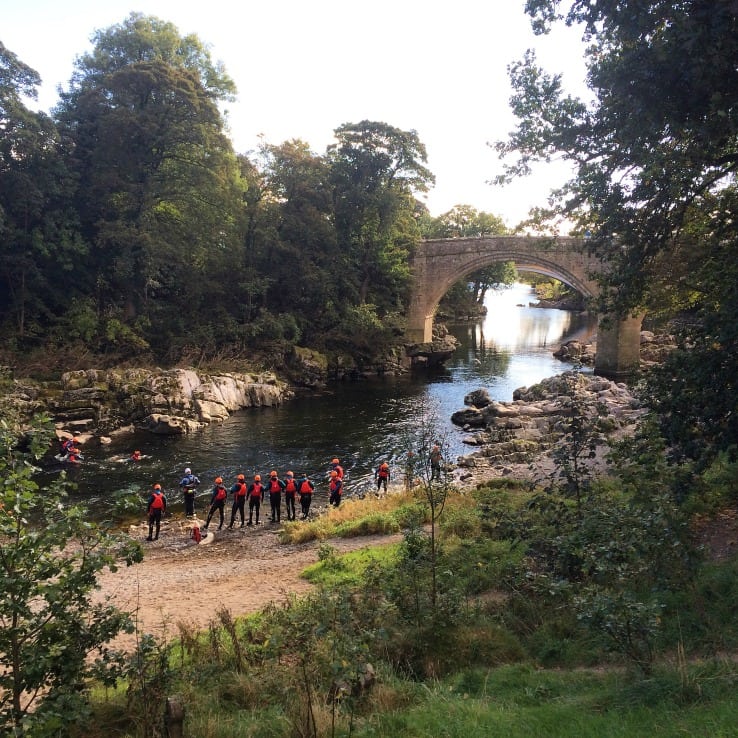 If Ruskin had been partial to fish and chips, he might have been keen to visit The Big Chip Café in the village of Arnside on the Cumbrian coast. If he had partaken in a delicious serving of haddock and chips with a portion of mushy peas then, mug of tea in hand, looked out over the estuary of the River Kent just as the sun was setting, he would have been rewarded with the following sight. Another possible contender for ‘one of the loveliest views in England’? 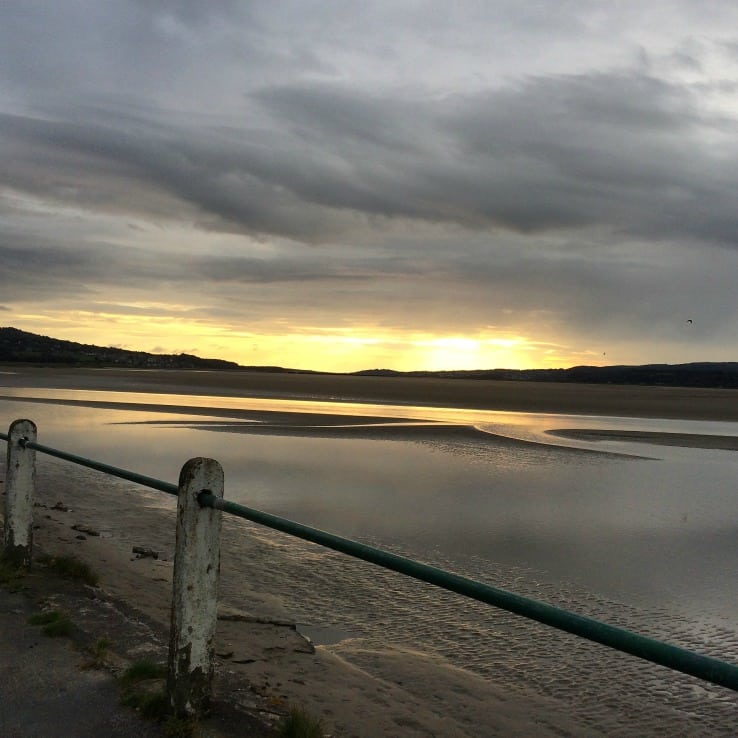 The following day we travelled north to Lake Windermere and Blackwell House, a remarkable Arts & Crafts house which has been lovingly restored to its turn of the century beauty. Designed by architect MH Baillie Scott as a holiday home for Sir Edward Holt and his family, Blackwell’s position above the lake is truly stunning. The architect made sure rooms were designed with large windows facing the lake and cushioned window seats exist to ensure that visitors today can also enjoy the breathtaking panorama. If only Ruskin had been around to see this view, I think he would have congratulated Baillie Scott and taken up residence with the Holt family, at least for the summer holidays. 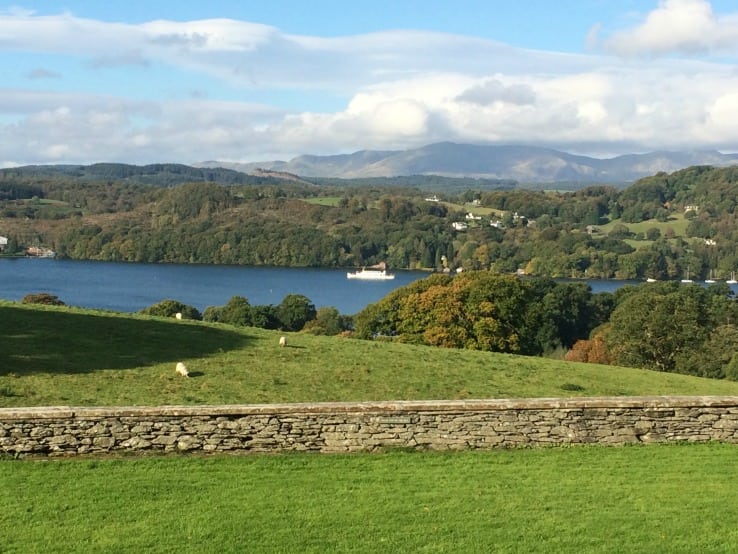 During our stay in Cumbria and Lancashire we were given complimentary accommodation in a luxury lodge at South Lakeland Leisure Village and a Woodland Retreat pod at Fell End Holiday Park. Kirkby Lonsdale, Arnside and Blackwell House are all very easy to drive to from the accommodation.