As a holiday destination, Switzerland brings to mind hiking in the mountains or walking by lakes. It doesn’t necessarily suggest city breaks. But it proved to be a wonderful country for city lovers. Dougie and I planned our Autumn break, taking in the cities of Basel, Bern and Lucerne (Luzern). We flew from Luton in the UK to Basel then took the train between each city before flying back from Zurich.

A brief introduction to Basel

Switzerland’s only port, Basel is located on the River Rhine. Its proximity to France and Germany has made it a trade and transport hub over the centuries and this continues today. It’s an important centre of industry, specialising in pharmaceuticals, and is a location for trade fairs and congresses in Switzerland. But it’s also the cultural capital of Switzerland. Come to Basel if you appreciate art and design, theatre and museums. The city hosts the largest contemporary art fair every year and is well-known for its cutting edge architecture. Seven winners of architecture’s Pritzker Prize have buildings in and around the city, including local firm, Herzog & de Meuron, designers of London’s Tate Modern and Beijing’s Olympic Stadium.

The EasyJet flight from Luton is quite short (around 1 hour 40 minutes) and left at a very civilised time of 11.45am. As Basel sits on the border between Germany, Switzerland and France the airport, EuroAirport Basel-Mulhouse-Freiburg, is administered by French and Swiss authorities. Unfortunately, the passport queues were very long. There didn’t seem to be enough officials working and we spent nearly as much time queueing as we did flying from the UK. I do hope this is just a blip as it is such a well-located airport. Another option would have been to fly direct to Zurich and catch a train to Basel from there.

Once you’re through passport control, the city welcomes tourists with open arms. All visitors staying in the city are given a BaselCard for the duration of their stay. This card, unlike most city cards, doesn’t cost a penny. It offers free transport in the city, including the bus from the airport; 50% off museums and attractions including the zoo and the theatre; a sightseeing tour and Guest WiFi at many hot spots in the city. All these benefits made a huge difference to our short stay in Basel.

We made use of the efficient, frequent trams and buses, hopping on and off with no need to show our card or tap in. Visitors just need to have the card with them in case a ticket inspector gets on the tram. For the airport bus, hotel confirmation (printed out or just on your phone) is all that’s required, if asked. The discount on museums made sightseeing very affordable.

Where to stay in Basel

We chose the gorgeous historic hotel Der Teufelhof (meaning Devil’s Court) in the beautiful Old Town of Basel. There was a very handy tram stop just outside, making travel easier, even though much of Basel can be explored on foot. The hotel, comprising two 18th century townhouses, includes two restaurants (one, Bel Etage, is fine dining),  a bar, coffee lounge, wine cellar, theatre and brewery. What more could you ask for! The hotel has two different types of guest room: those in the Art Hotel are all unique, allowing guests to appreciate art in a new context. Those in the Gallery Hotel are furnished in a simple, contemporary style and offer different sizes including family suites.

Our bedroom, in the Art Hotel, was Room 8, ‘Just Tonight’. Decorated by artist Julia Steiner, along with the next door room, Number 7, ‘Just Today’, the room was very stylish. Black acrylic paint has been brushed onto the white walls, creating movement, shadows and unusual patterns. It was incredibly beautiful, in the eaves of the building, with the rooftop windows bringing so much light into the room. A smart Eames chair at the desk, coffee machine, Noir toiletries by The White Company: so many touches made this a well-designed bedroom not just an attractive space. Plus, like everything else in Switzerland, it was spotlessly clean. I’ve never known taps and basins to be so shiny. And, maybe my favourite pillow gift ever – a book of short stories.

Where to eat in Basel

There’s no hiding the fact that Swiss restaurants are expensive so you do have to box clever to avoid paying a king’s ransom for a bowl of pasta. During the day it can work out much cheaper finding pastries or pizza slices at city supermarkets and, in all three cities we visited, the train stations had some excellent bakeries and takeaways. Our favourite meal in Basel was found at 1777, a café, bar and restaurant which had such a great vibe and extremely friendly staff. Here you can use tick box forms to create your own baguettes and salads or, do as we did: order the classic 1777 burger for 15.90 CHF (Swiss Francs). This worked out at just over £12. It’s even cheaper if you choose to take away rather than eat in. It was here we also tasted the products from our hotel’s brewery, Stadmauer Brauer. I had a Heller Engel (light angel) and Dougie chose the Dunkler Teufel (dark devil). Excellent craft beers at similar prices to the UK. In general, beer was a much cheaper option than wine.

Another enjoyable beer was supped at Zum Kuss (to the kiss), in a very peaceful garden near the railway station. A park and arboretum have been created in this former cemetery. I read somewhere that the building used to be a mortuary or a chapel but, on further investigation (the architect’s website) it would seem it was the gardener’s house. Whatever its previous use, this café/bar has given a new lease of life to its surroundings…

You can’t come to Switzerland and not indulge in some Swiss treats. Keep some francs back to feast on chocolate and cake. We made ‘Kaffee und kuchen’ a regular afternoon extravagance, as we did in Austria. We adored these two dreamy offerings from Conditorei Brandl on Wattstrasse. 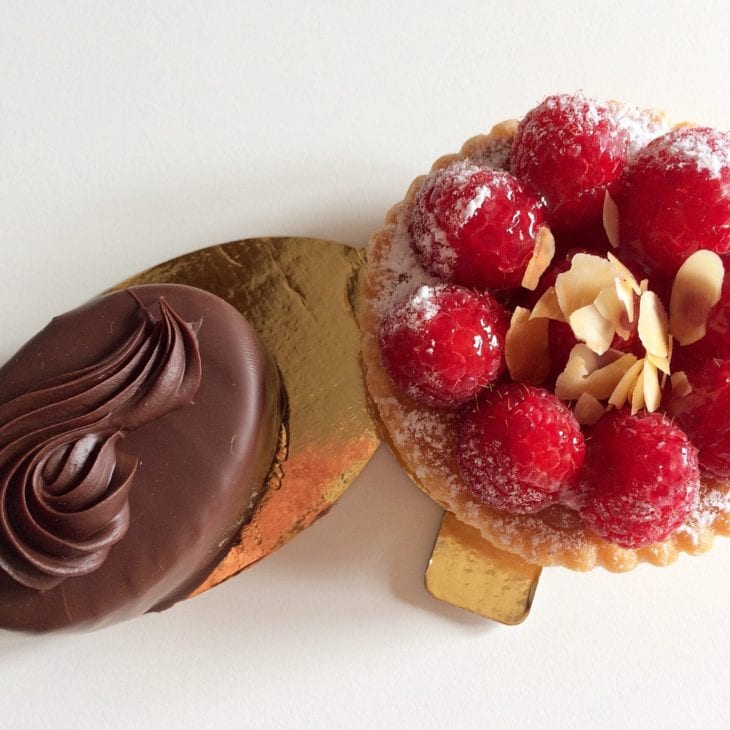 Basel may be a centre for modern art and brave new architecture but visitors also flock to admire the exquisite medieval Old Town in this city of contrasts.

A saunter through the Old Town (Alstadt) will reward you with cobbled streets, shuttered houses and window-boxes groaning with flowers. Fountains are everywhere: there are over 180 of them in the city. Fill up your water bottles and appreciate the detail of the unusual designs. This medieval Basel is a treat: start at the 600 year old Spalentor city gate and lose yourself in the pretty streets where you’ll feel the urge to photograph every door.

Admire the Munster (Cathedral) in the spacious Munsterplatz and the astonishing Rathaus (City Hall) with its painted red façade in Marktplatz. Walk across Mittler Brücke (Middle Bridge) but don’t miss Lällekönig (Tongue King) high on the wall, sticking his tongue out at the residents of Kleinbasel across the water. You could always take a ferry across the river: there are four special boats which are driven solely by the current: they will silently and gracefully take you to the other side.

This museum of fine arts is housed in three separate building and holds the most comprehensive collection of public art in Switzerland. With our BaselCard discount, we only paid about £6.20 each to see all the permanent collections so it was well worth a canter round, especially when we found works we loved by Paul Klee, Picasso and Rousseau. 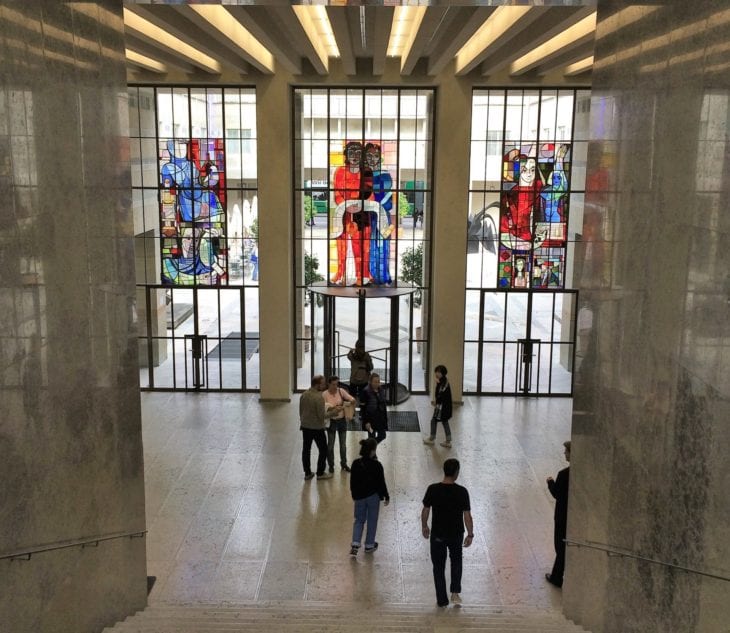 The newest wing, opened in 2016, is a fabulous space for contemporary art and is linked to the original 1930s building by an underground passageway – just watch out for any strange floating figures as you walk down the stairs. 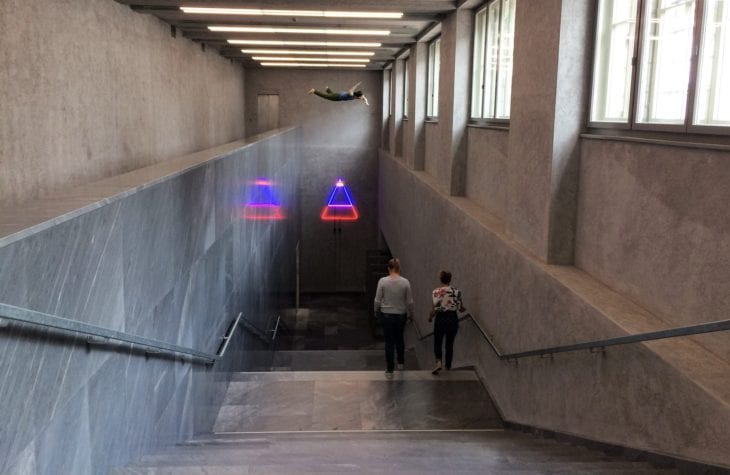 This incredible collection of over 6000 teddy bears, dolls houses and intricate miniatures soon became our favourite place in Basel. Our discounted entry fee of around £2.70 gave us access to teddies galore: teddies watching the Grand Prix, teddies at school, teddies on holiday and teddies in the bath. Beautiful bears, from all the world’s great makers, are on display but the clever and humorous way they are curated takes an extraordinary talent. 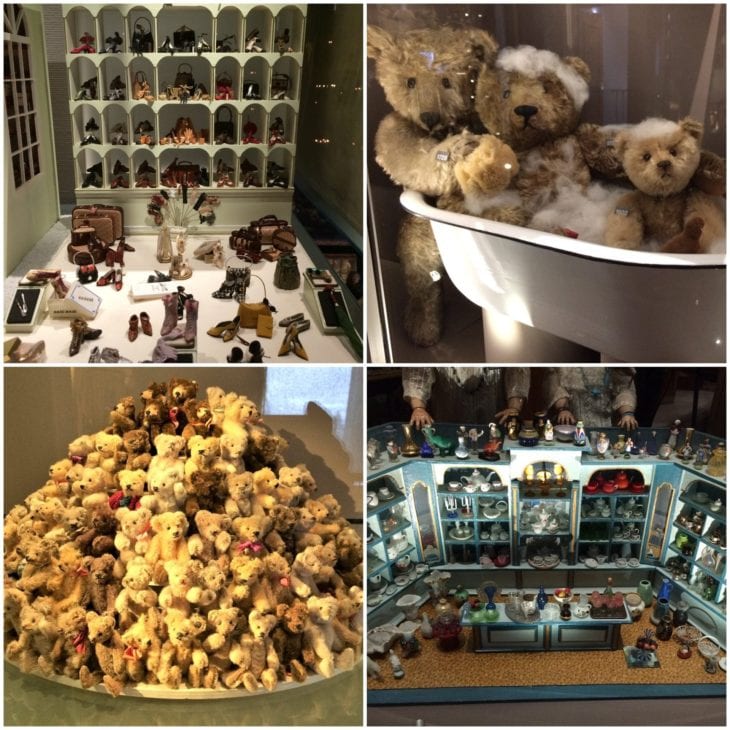 The dolls houses are equally entrancing, as are the miniature shops with teeny tiny items on the shelves. There are also models of roundabouts and fun fair rides: press the button and see them come to life.

Any temporary exhibitions are also included in the admission price. We were fortunate to see a collection of jaw-dropping costumes designed for Venetian carnival balls.

This museum is a joy for adults and children. I can’t praise it enough.

Other attractions in Basel

What did we not get the chance to see? The Museum Jean Tinguely features the work of this wacky creator/scientist whose kinetic sculptures can be set in motion. Thankfully we could see some of his enchanting creations in the Tinguely Fountain in the centre of Basel.

We also missed the Paper Museum, which I hear is a huge hit with children. No time for the Music Museum nor the Natural History Museum nor the museum for the history of medicinal chemistry. It’s no surprise the slogan for Basel Tourism is ‘Culture Unlimited’.

I’ll write a separate post about our day trip from the city which included a wonderful 5km walk, Rehberger-Weg, between two impressive art/design establishments: the Fondation Beyeler and the Vitra Campus. This would make a great day out for families, with cool art installations to pass on the way and a chance to walk over the border to Germany.

Why we loved Basel

As the starting point for our stay in Switzerland, Basel was the perfect host. We were shown the old and the new along the banks of the mighty Rhine. Attractions were well organised, everywhere was clean, people were friendly and the city was enchanting. As we caught the tram to the railway station – we could have walked but, hey, it was free – we said goodbye to Basel and took the next step on our Swiss city journey. Next stop: Bern. 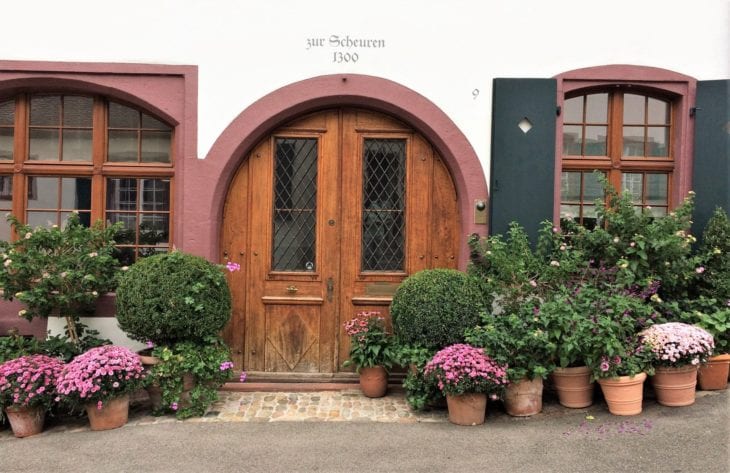