Remind me, when did the re-fit of our bathroom begin? Oh yes, Wednesday 2 January was the date I received the phone call and had to remove all the gungy half-bottles of shampoo and hand cream from the cupboards, dump them in the spare room and allow the fitters to dismantle the rest.

Three weeks of plaster dust, noise and numerous mugs of coffee later we now have a bathroom, albeit without new blinds and accessories: everything we had before complemented a blue and white scheme and are therefore not allowed back in. They will remain in a ‘just in case’ box which will never be opened again.

Initially the disruption upset the family routine. Dougie had to get showered at 6.30 am so he could vacate the en-suite in time for Rory to take up residence at 7. Once the boys were off to school and work this didn’t leave me any time to get ready myself before the fitters arrived each day. Occasionally if I knew they were going to be late, I could be done and dusted in time, but usually I had the unsettling experience of showering in one room whilst a strange man hammered the life out of the adjoining wall, so much so I had the awful image of him knocking a hole through then handing me a bar of soap and a loofah.

I don’t know how people manage to oversee house renovations without being on site. Every day I had to make lots of very important decisions: height of mirror, colour of tile grout, positioning of loo roll holder. Things didn’t always go to plan. A few days ago our resident fitter cut his hand badly while pulling tiles off the wall. Although the bleeding stopped reasonable quickly, there was quite a gash so I sent him five minutes down the road to the surgery for Dougie to patch him up. He returned in ten minutes with his hand glued, dressed and covered in a fetching rubber glove.

A crack was found in the bath….twice. On our third bath I was assured it would be perfect but after two faulty ones, I’m a tad wary and haven’t yet tried out the Archimedes principle on it. Our wacky choice of radiator – a huge sheet of copper – was sniffed at by the fitters who thought we’d lost our minds and wondered if we really wanted it in the bathroom as it looked like scrap metal. In the end we agreed, it looked ridiculous in the bathroom but was just perfect for the kitchen so it is now going to be mounted there instead as a functional piece of artwork. The fitters just roll their eyes.

Work has now begun on the en-suite so Dougie and I have moved ourselves to the spare room so the bedroom can be dust-sheeted. We quite like it in the spare room: the novelty makes it feel we’re on holiday which is just as well as that’s the nearest we’re coming to one at the moment. And going into the new bathroom, which is clean and hasn’t yet become stuffed full of rubbish, feels like being in a hotel. Maybe I should find all those stolen hotel toiletries and pop them in the room to complete the effect?

I suppose I ought to show you what the new bathroom looks like, though I suspect most of you have just scrolled to the bottom anyway. The photos don’t exactly show the proper colours. The floor tiles, though grey in natural light, look more like a light sandstone under the ceiling lights or with a flash: the tiles are called ‘anthracite’ which doesn’t help at all. The cabinets, though described as ‘natural’, would be far more accurately described as ‘double-shot full-fat latte’. 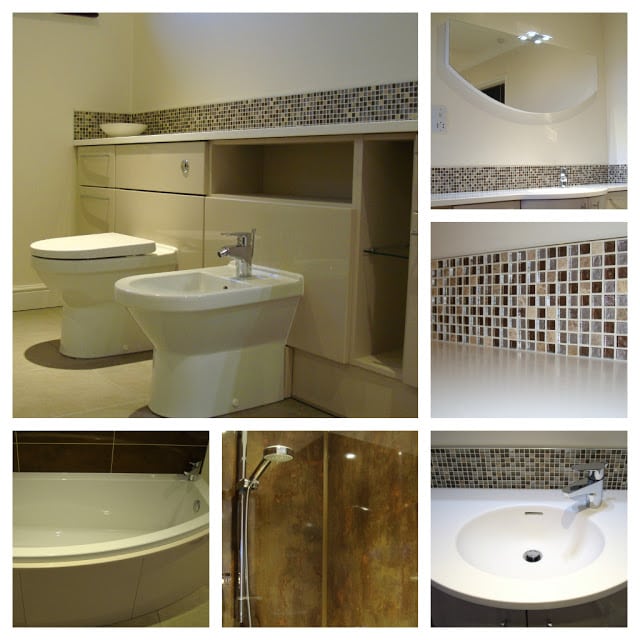