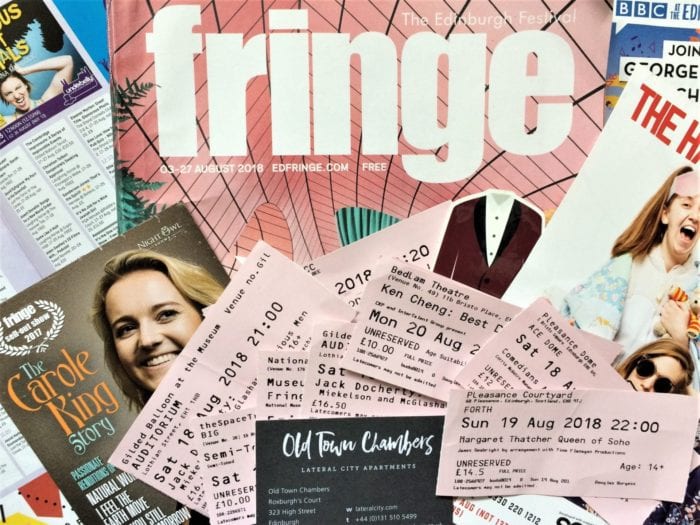 “Don’t make eye contact”, Dougie warned, as we ran the gauntlet along the Royal Mile the following morning. It costs a lot for performers to put on a show at the Edinburgh Fringe and as there are hundreds of options for visitors, everyone is a potential customer. So we are bombarded with flyers everywhere we turn. I didn’t mind at all. I’ve had to stand in the market place in Spalding, handing out flyers for my own Am Dram productions so I know how demoralising it can be. Consequently I took every flyer I was offered. We’d only booked a few shows in advance and there were plenty of hours in the day to be entertained. One of those flyers could be the ‘next big thing’.

We headed to The Caves, a unique venue situated underneath the South Bridge. These vaults have had various uses over the centuries from whisky stores to stables for the French Cavalry who were bodyguards to the Royal Family. On a Saturday morning in August they were home to Just The Tonic comedy club and we happened to be walking by when A Comedy Brunch 2 was about to begin. We didn’t need to pay: just donate at the end if we thought it was worth a few quid. To reserve a ticket in advance you would pay a fiver. Comedian Neil Harris warmed up the audience with a short set including a very funny explanation of why choosing something to eat in Subway is hugely stressful: think mathematical calculations regarding all the number of options available. The main act was Julie Grady Thomas: she swapped this role with Neil every day. Dressed in full Barbie regalia – huge pink frilly skirt, sequined top and tiara – she initially surprised the audience but then, cleverly, discarded the Barbie outfit, piece by piece, as she compared Barbie’s ridiculous house and jobs with her own real life struggles.

On a roll, we sussed out what else was on in the area and hurtled up the stairs to the Snifter Room in The Mash House, another Just The Tonic venue. The Hangover Cure was just about to start, featuring two young female comedians, Ruby Carr and Ophélie Hocqurd. Ruby just looks funny: her expressive face makes you smile and her long flailing limbs make her appealing, like a new-born foal. Her stories were about shopping in Lidl, pirates and loneliness. Ophélie Hocquard, originally from France, laughed at how her own name, when spoken in English, sounds like ‘Awfully Awkward’. She’s not at all. Her delivery was relaxed but assured, explaining, with a wry smile, how you can use Tinder to find men who can put up shelves. Look out for these young women in the future. They made us laugh a lot.

Back to Cockburn Street, where we had our haggis fest the previous day. Lunch was lentil soup and a sausage sarnie in the cosy Café Cockburn. Dipping out of the usual Fringe activities for an hour or so, we met up with Erin from Visit Scotland. I worked with Erin on a trip to Glasgow and Edinburgh in 2014 and we’ve kept in touch, online, ever since. It was Erin who recommended our accommodation, Old Town Chambers, for this trip. Although Visit Scotland had no involvement in this jaunt, Erin suggested we join her on a tour of Edinburgh’s underground vaults with Mercat Tours.  Without any need for trickery, the guide took us into the Blair Street underground vaults, the scene for murders, body-snatching and ghostly goings-on. Despite the noise and chaos of the Edinburgh streets above us, it was utterly silent in the stone caves. I wondered why Dougie had never seen them before but we were told they were only uncovered in 1985, after Dougie had moved away from the city.

Did we see any ghosts? It was certainly eerie in the dark, cobbled vaults and, at one point, the guide asked us to close our eyes and allow a name to come into our sub-conscious. There were tales that a boy called Jack or James had died there and visitors are sometimes aware of his presence. I didn’t say anything at the time but the word Jane came to my mind at the time. Either the lad had a sister or my ears need syringing again.

The Fringe beckoned again but this time with a little music. Semi-Toned are an a capella group from Exeter University. They won choirmaster Gareth Malone’s TV competition, The Choir: Gareth’s Best in Britain in 2016. Our link to this talented group of velvet-blazered boys is that one of them, Charlie, lived in a student house in Exeter with our son. Rory often told us the choir would rehearse in their living room and members of the group would often just hang out at the house. Of course we had to go and support them and, wow, I’m glad we did as they were sensational. A great cheesy story about not knuckling down to university studies weaved its way through some magnificent vocal harmony numbers, finishing on a stunning version of “Bat Out Of Hell”. We chatted to the lads afterwards and I commended them on the final song. “Oh, we could see you singing along”, they declared. Embarrassing mother, or what.

We had an hour or so to kill before our next festival show at 9pm but instead of finding a little bistro, we cantered round Sainsbury’s, bought a couple of microwave meals and headed back to the apartment. We’d paid enough for the place so were determined to make use of it – plus it was bliss to kick off our shoes for a bit, loll on the sofa and relax before getting onto the Edinburgh Fringe treadmill once again.

A huge fan of the Scottish TV programme, Scot Squad, Dougie was beside himself with excitement to be seeing comedian Jack Docherty in the guise of two characters; Chief Commissioner, Cameron Miekelson and mad, English-hating patriot, McGlashan.  Docherty didn’t disappoint: we lapped up the hilarious set. I think they should show Scot Squad on mainstream BBC not just in Scotland: this man deserves a wider audience.

Could we manage one last show before we left the all-nighters to their revelry? Of course we could. Comedians Against Humanity was being performed at the Pleasance Dome. We bought advance tickets for this improvised show involving the game, Cards Against Humanity. The audience were each given four cards and the rest were left to the host, Yianni Agisilaou, and three other comedians. The success of a show like this depends on the luck of draw with regard to the cards and how well the comics bounce off each other. The night we were there, it didn’t gel quite as well as we’d hoped. Genius idea to turn this brilliant card game into a show but a disappointing result.

Grateful that our accommodation was only a few minutes away from the venue, we headed back, this time with far fewer flyers plunged into our hands. Two days down, two to go. 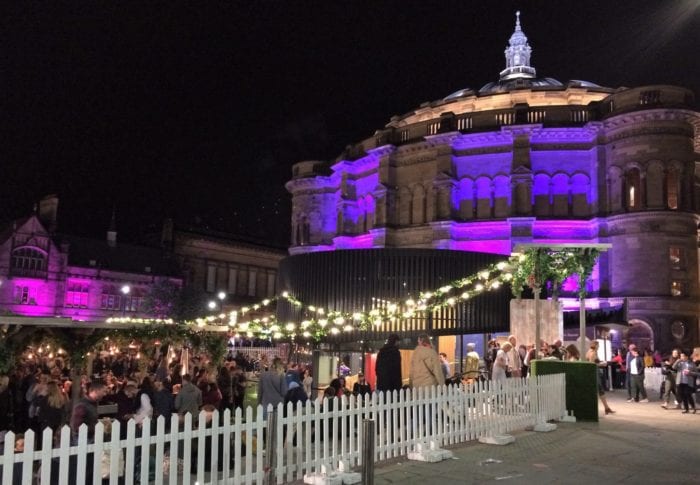