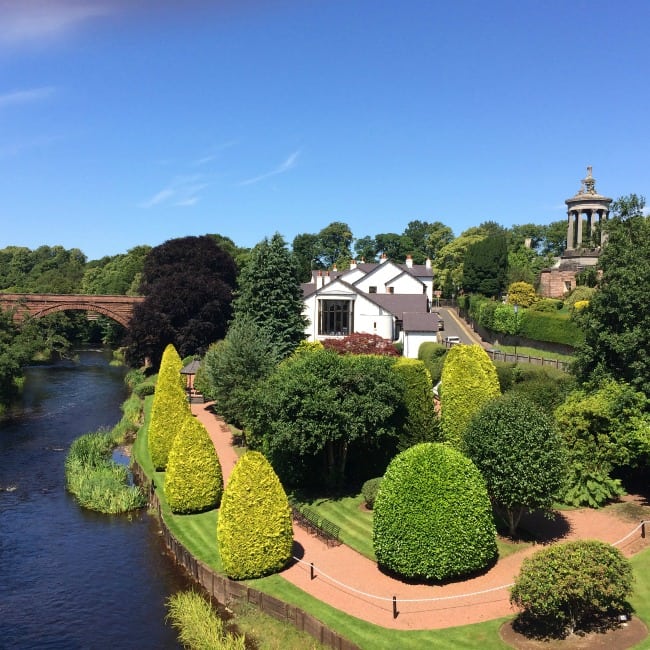 It was hard to say goodbye to Shingle Lodge in Knockinaam. It had been our idyllic hideaway on the western coast of Scotland but we were looking forward to moving on, spending a night at the Blackaddie Hotel, another favourite from our previous visit to Dumfries and Galloway.

We had no real plan for the day, only knowing that it ended in Sanquhar and a fabulous meal from Scotland’s Chef of the Year, Ian McAndrew. We could reach it by driving across the Galloway forest or take the coastal route up to Ayrshire then cut across. The weather was gorgeous so we opted for the coast, knowing the road hugs the sea for most of the way, allowing for lovely views across to the Isle of Arran and the southern tip of the Kintyre peninsula.

We stopped at Lendalfoot where there is a memorial to the Russian cruiser, Varyag. The ship was part of the Battle of Chemulpo Bay in 1904 at the beginning of the Russo-Japanese war. When up against five Japanese cruisers, rather than surrender, the captain decided to sink the ship. The Varyag passed into Japanese hands, back to Russian ownership and was eventually seized by Britain. It ran aground on rocks near Lendalfoot in 1920.

Looking out to sea at this point, the appealing dome-shape of Ailsa Craig was visible, 10 miles off the coast. This small but beautifully-formed volcanic outcrop has a nickname, Paddy’s Milestone, as it was a haven for Roman Catholics during the Scottish Reformation in the 16th century. It’s now a haven for birds, particularly gannets and puffins. The rare granite from Ailsa Craig produces over half of the world’s curling stones. 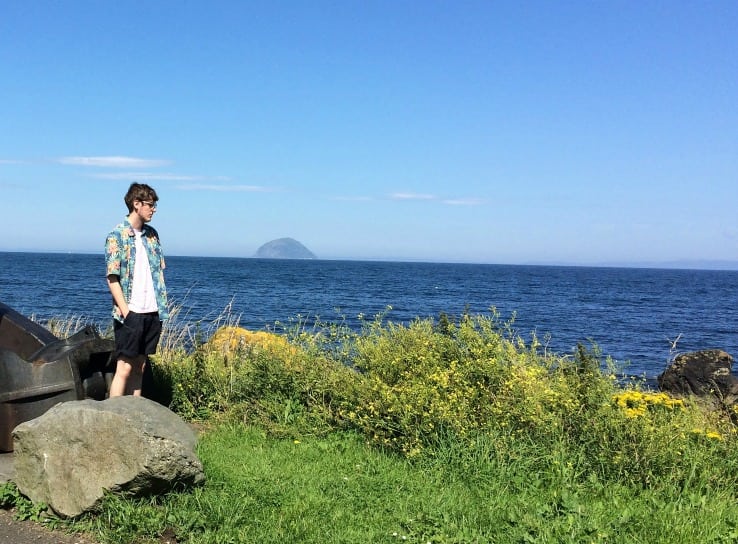 Further on up the coast we drove past Trump Turnberry, the luxury resort/golf course now sporting the recognisable black and gold branding of the US President. It took me by surprise when we saw it last year and I still ‘wowed’ when we came across it this time. The hotel is vast and looks as if it should be in Disneyland or Las Vegas, not on the empty coastline of Scotland.

A few miles further on and we spotted signs for Burns’ Cottage in the village of Alloway. Dougie and I had immersed ourselves in all things Burns on our previous visit to Dumfries, seeing where he lived in his final years and taking a look at the mausoleum where he is laid to rest. It seemed fitting, therefore, to have a look around Alloway, where the great man was born.

Alloway was a revelation. Such a pretty place, looking even more delightful in the warm sunshine. We made our way to the car park at the Robert Burns Birthplace Museum which houses a very contemporary visitors’ centre with a great café, gardens and museum. Rory made a beeline for a haggis and cheese panini which I was surprised even existed as a thing! Scotch Broth for Dougie and a scone for me. We sat outside and examined the National Trust for Scotland leaflet which explained what there was to see here. A lot, apparently.

The museum itself is modern but quite dark and kept at a cool temperature to protect the books and letters on display. There were some quite bizarre activities to entertain kids like me. I had a go at making a silhouette portrait of myself – having two goes to avoid a double-chin the second time. You can also design a biscuit tin lid, creating a face which can either resemble Burns…or not. Mine was not. There’s also a push button ‘Auld Lang Syne’ game where you have to join in a circle of digital revellers and make sure you keep to time with the song – strange but quite funny.

From the museum we walked a few yards, through beautiful gardens, to the Burns Monument. Sponsors who have donated money to protect the monument have a metal rose attached to the railings as a thank you. 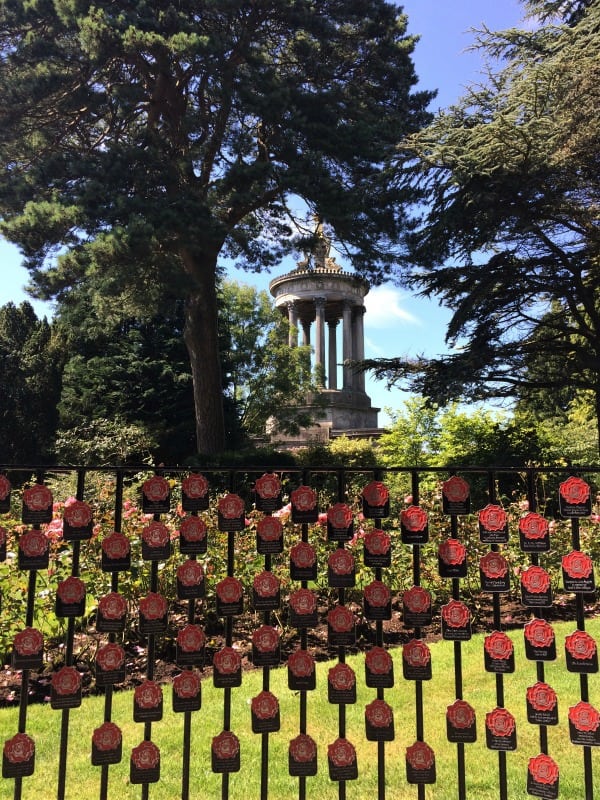 Across the road is Alloway Old Kirk where Burns father and sister lie buried. It dates back to the 16th century and is the scene of the witches dance in Burn’s poem, Tam o’ Shanter. It’s now a very tranquil setting and has been renovated in recent years, reopening to visitors in 2008. 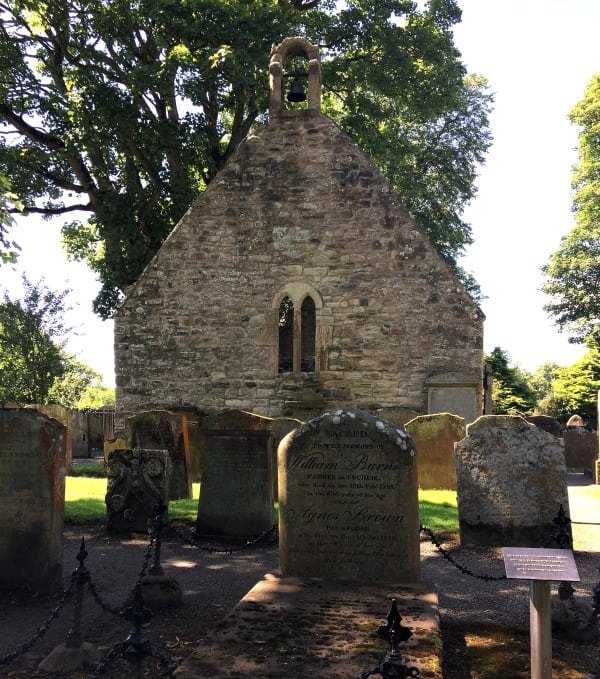 A little further on we reached Brig o’ Doon, the most picturesque little bridge, also made famous in Burns’ poem, Tam o’ Shanter. It’s the setting for the final scene where Tam is being chased by Nannie the witch. He escapes but his horse Meg loses her tail. The musical, Brigadoon, also takes its name from this scenic location. 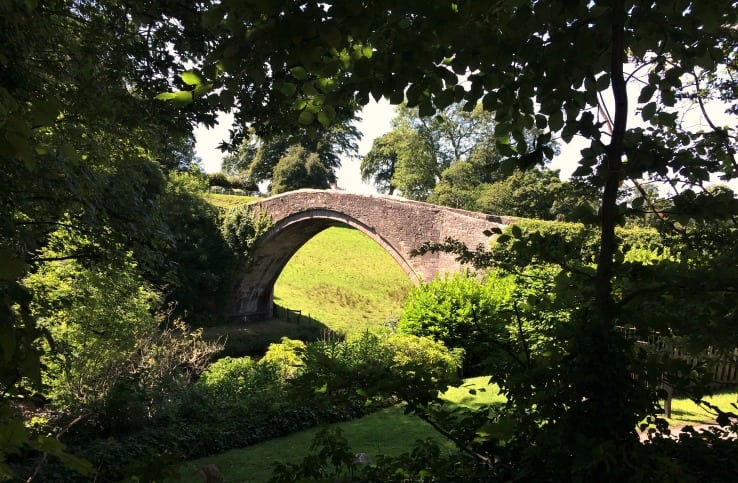 More references to Burns’ poems can be seen on the Poet’s path. There’s a ‘wee, sleekit, cowran, tim’rous beastie’ but this mouse is neither wee nor tim’rous. In fact I’d say towrin’ not cowran. We found a large stone haggis and a sculptured fox, free from his chains, referencing the poem about Glenriddell’s fox.

I also loved the wooden seat which you can sit on while you wait for the little bus to take you from each part of the Alloway experience if you don’t fancy the short walk. It’s called Burns’ Birthplace Bus Stop, Book Bank, Bench. Rest your legs, borrow a book and wait for the bus. How wonderful is that. 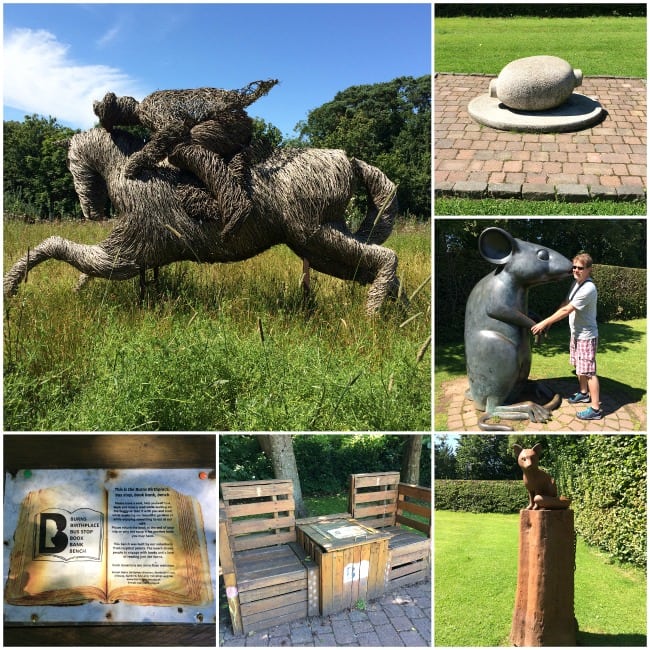 At the far end of the walking trail we reached Burns’ cottage, passing a beautiful, natural sculpture dedicated to Tam and Meg. Robert Burns was born here in 1759. Dougie remembered he had visited as a child. It was only when we returned home after the holiday that we found a photo which proved this was indeed true. 50 years apart, Dougie appears outside the cottage: with his mum, Emily, in the first photo and his son, Rory in the second. If only we’d known exactly how the two were configured in the first photo, we might have recreated it in the second! 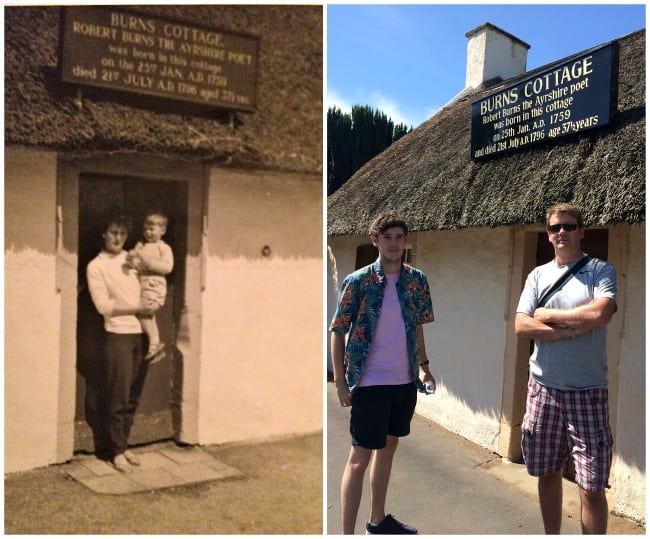 The few hours we spent in Alloway were wonderful. If you’re a member of the National Trust of Scotland you can freely follow the footsteps of the Bard around the village. If not, check prices here  for entry to the museum and cottage. You can, however, just walk around the village, see the outside of the cottage and have refreshments in the visitors’ centre. Whether you’re a big fan of Burns or not, it’s an absolutely lovely day out.