“Look! You can see our hotel at the end of the beach!” I piped up, simultaneously pausing the action as I pointed at the TV, “It’s just in the distance, a hundred yards from where the dead body is poking through the sand.”

We were watching the new series of Wallander a few weeks prior to our trip, seeing Kenneth Branagh ferreting about with a non-too attractive white limb sticking up next to the shore.

“Is that where we’re going?” Dougie asked, and continued to shake his head as we saw our gruff hero drive through the bleak, rainy countryside or stand, desolate, at the dark, ominous dockside.

I had a lot of work to do to convince my family that Ystad would be a fabulous place in the summer. I was right. It was perfect. This is the beautiful Ystad, the gorgeous, flower-filled little town, with its tiny terraced houses, gladioli blooming at each front door. This must surely put a smile on Kurt’s face in the summer months. 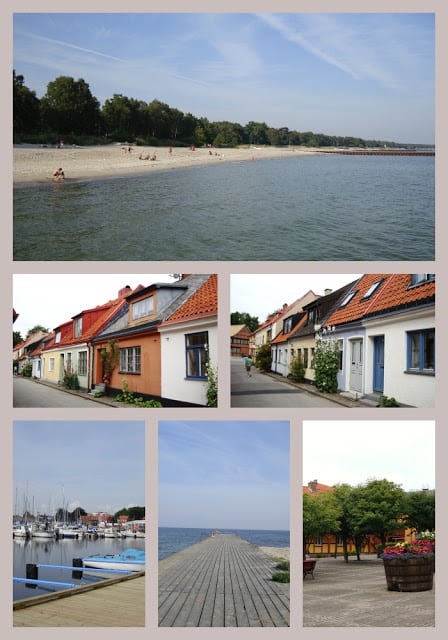 If the moody detective prefers the quirky and bizarre, I reckon he can’t improve on the medieval crucifix in the St Maria kyrka where the figure of Christ has a mop of actual human hair, donated by a well-meaning parishioner in the nineteenth century. Oh dear, not a good look. I’m afraid I was sniggering so much (God forgive me) that I neglected to take a photograph.

This same church is the home of Ystad’s famous night watchman who sounds a bugle every 15 minutes from 9.15pm to 1am every night. A tradition that goes back to the 17th century, to warn the townspeople of threatening fire, the haunting sound is audible wherever you stay in the centre. You can’t see him, but if you look carefully you will see his horn appear in the openings in the tower walls. The bugle-blowing only stopped during World War II, though residents then complained that they couldn’t sleep because of the unbroken silence. Now it continues for the sake of tradition and if the night watchman does spot a fire, I gather he phones Emergency Services.

We found a little gift shop selling local pottery and there were some special mini night buglers. We bought one as a souvenir, though Rory wasn’t exactly impressed and thought it looked like “a nun with an enormous spliff”.

And how would you know what that looked like, young man….?