Whilst our son jetted off with his girlfriend for a short break in Italy, Dougie and I settled for a slightly less glamorous and even shorter break closer to home. Suffolk is a great favourite of ours as you can see from previous posts about Sutton Hoo, Aldeburgh, Constable country, and Ickworth.

We could only manage two nights away but picked the sunniest two days imaginable which made for glorious photo opportunities. We stayed in Woodbridge (more on that in a future post) but spent one full day on the coast walking along the seafront at Aldeburgh before a teatime stop at nearby Snape Maltings. Having visited both places before, this was the perfect day for ambling, sitting, admiring views and just being together – which is what we empty nesters do for fun, given half the chance.

First up, the famous coloured houses along the seafront at Aldeburgh, beautifully framed by the blue sky – 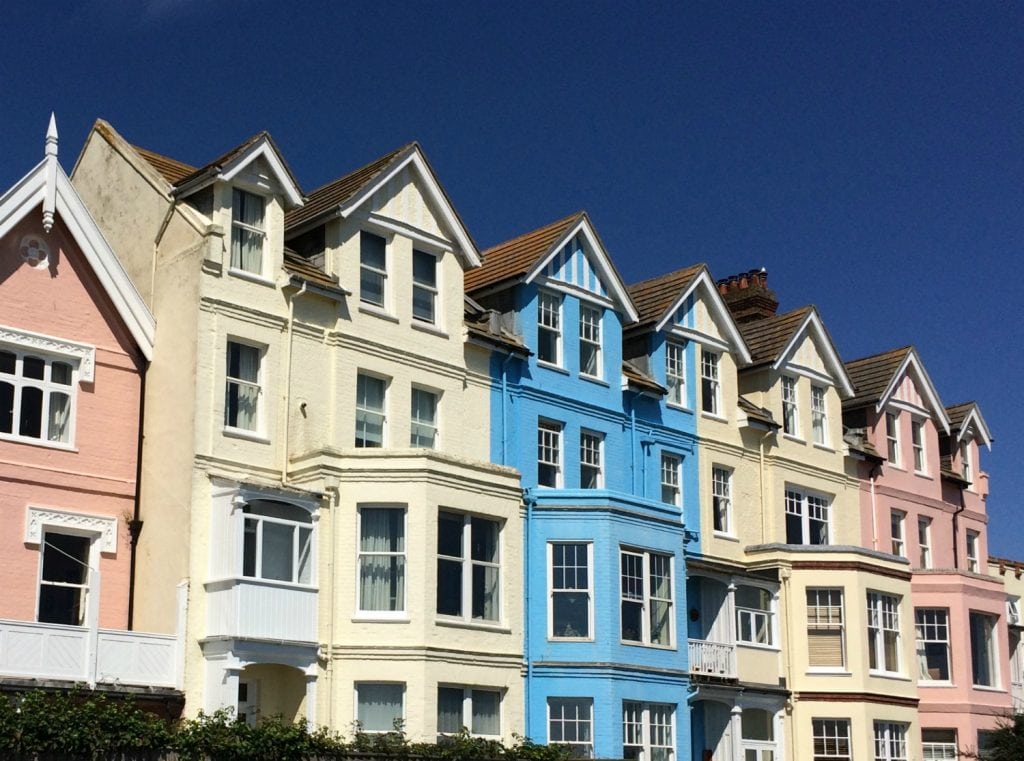 Next, a view from a bench, whilst slurping on a Magnum: fishing boats on the shingle beach at Aldeburgh – 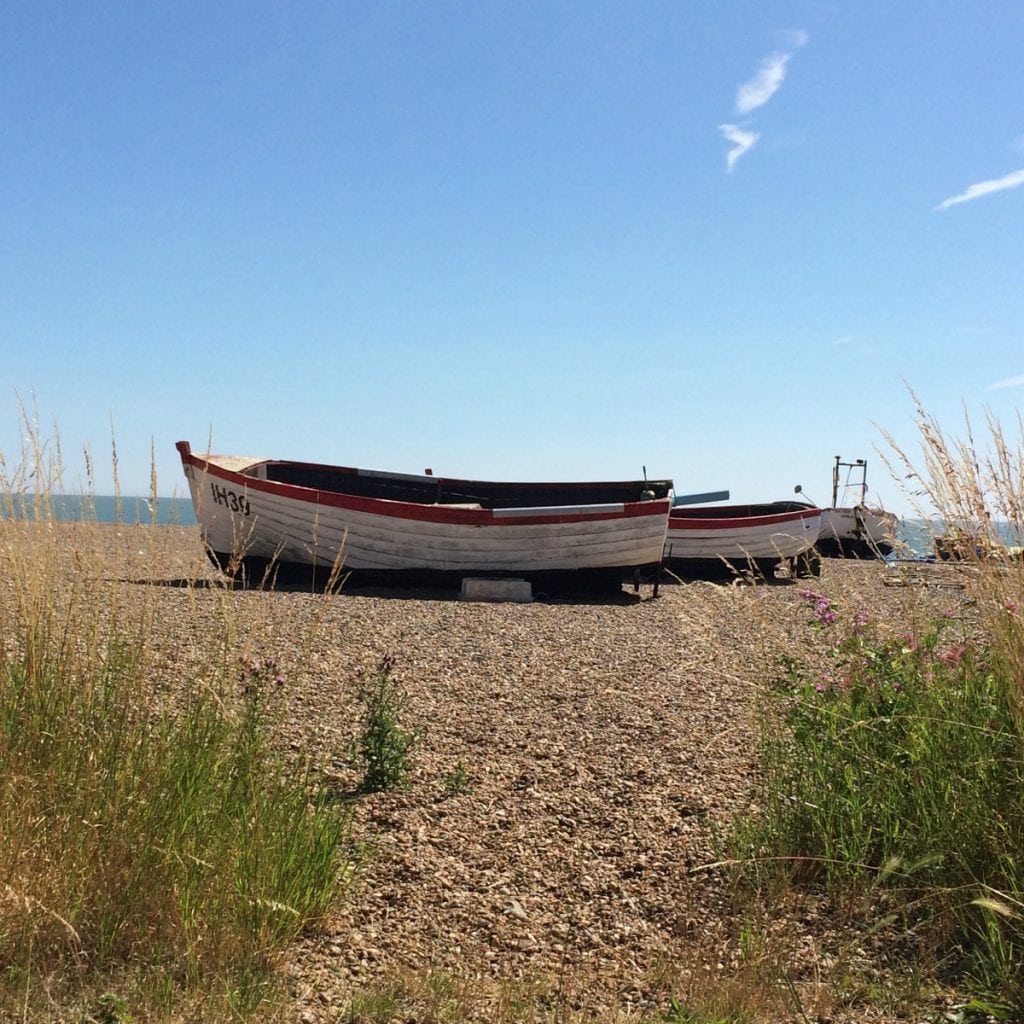 A little further along, the 400 year old timber framed Moot Hall, which is still used as a meeting place for the Town Council – 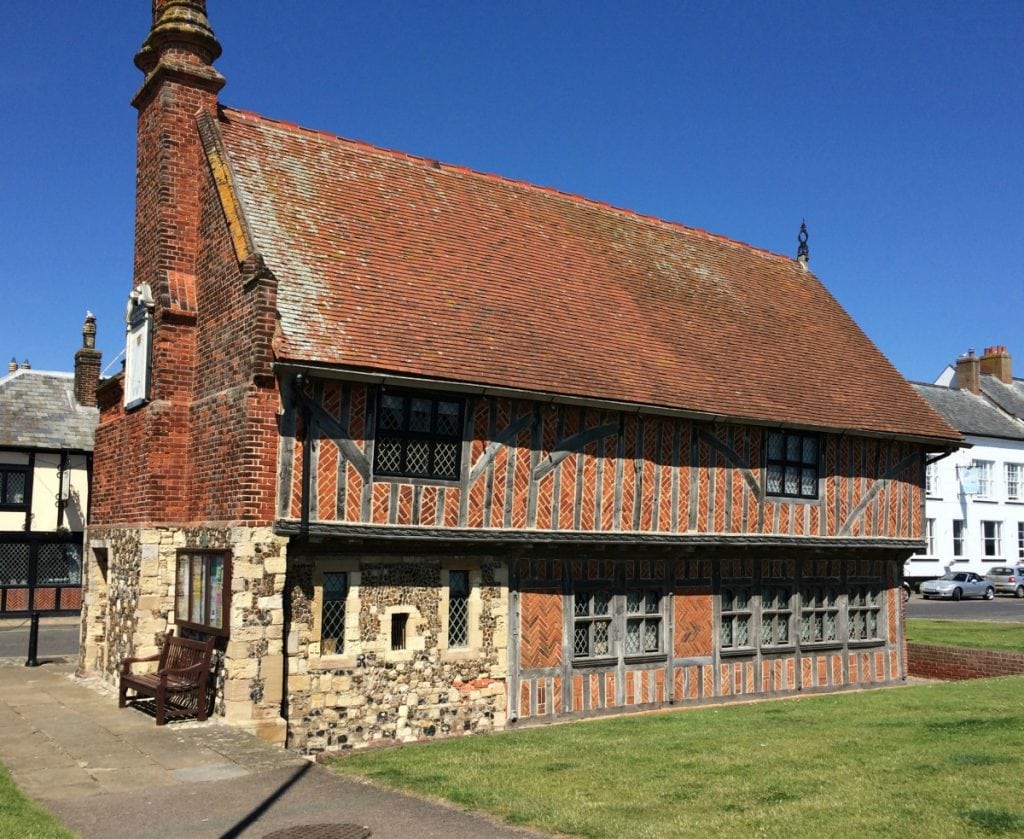 Still walking by the sea, we stopped at the magnificent sculpture, Scallop, by Maggi Hambling, which sits proudly on the beach. This 4 m high steel sculpture was made specifically for this stretch of coastline in Suffolk. Unveiled in 2003 it is a homage to Benjamin Britten, the composer who spent much of his life here. The quote, “I hear those voices that will not be drowned”, is from his opera Peter Grimes. The artist invites people to sit on the sculpture and contemplate the sea. We did. 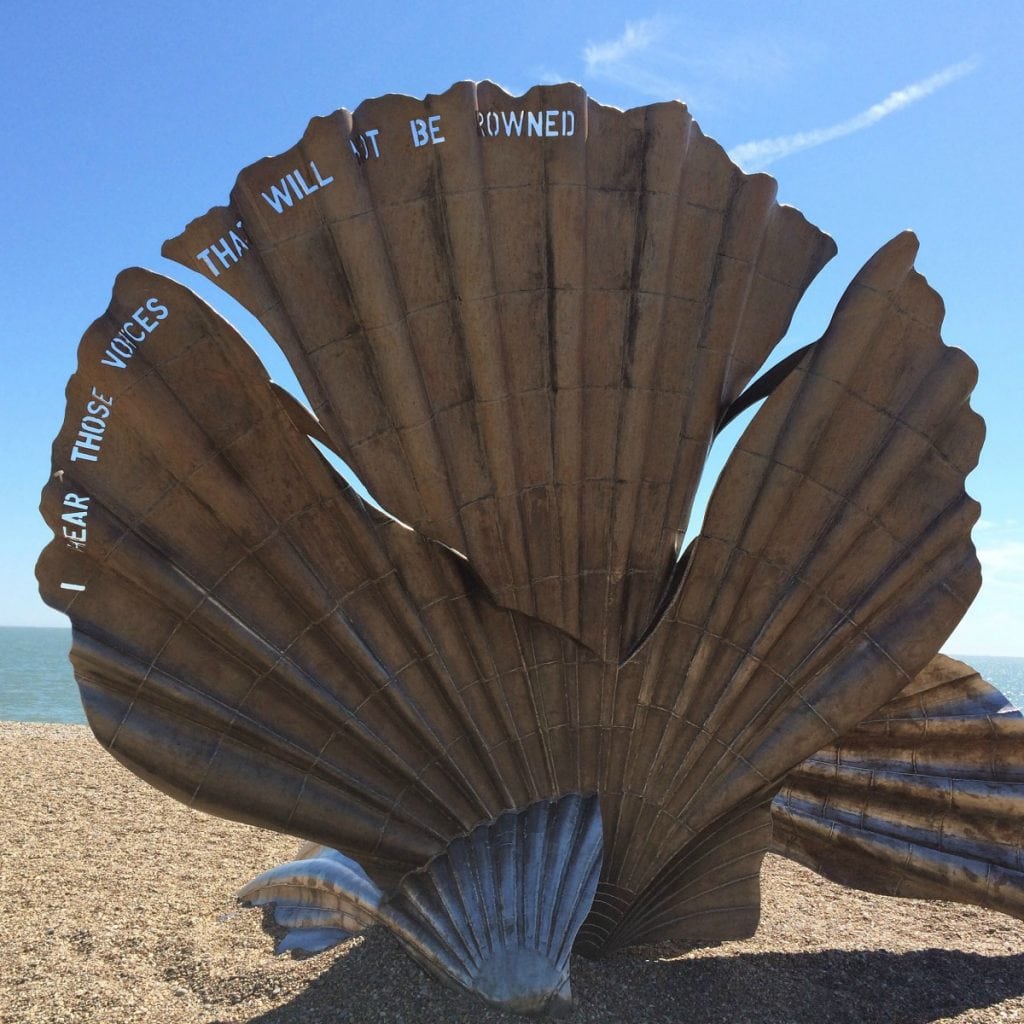 Later in the day, on our drive back to Woodbridge, we stopped off at Snape Maltings, an arts complex on the River Alde, famous for its concert hall and main site for the Aldeburgh Festival in Suffolk. There are shops and restaurants here plus some pretty walks in the gardens and beyond.

In the late afternoon sunshine we loved a new creation, Myriad, by David Rickard and Germano di Chello. This work of art, a winning entry in a competition to attract families, is like a huge periscope. You can peer into the numerous mirrors to see images of the countryside reflected in them. This photo is the view when you look up, standing directly underneath. 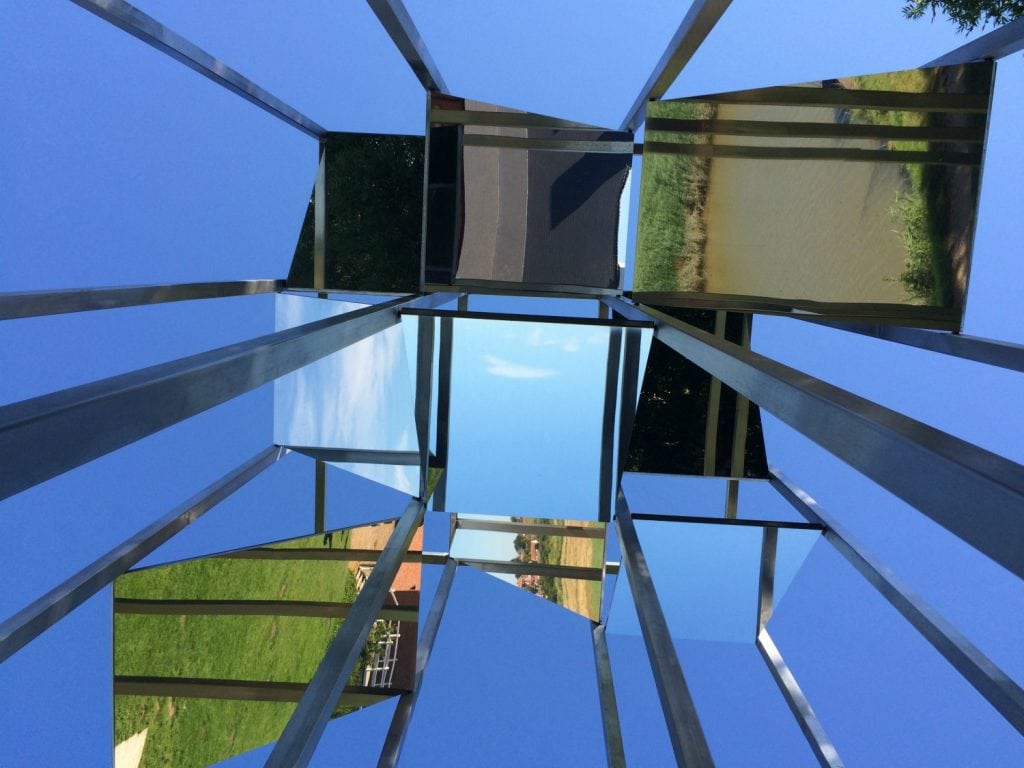 More blue sky to complement a fantastic Barbara Hepworth creation, The Family of Man, which has been at Snape Maltings since the 1970s. 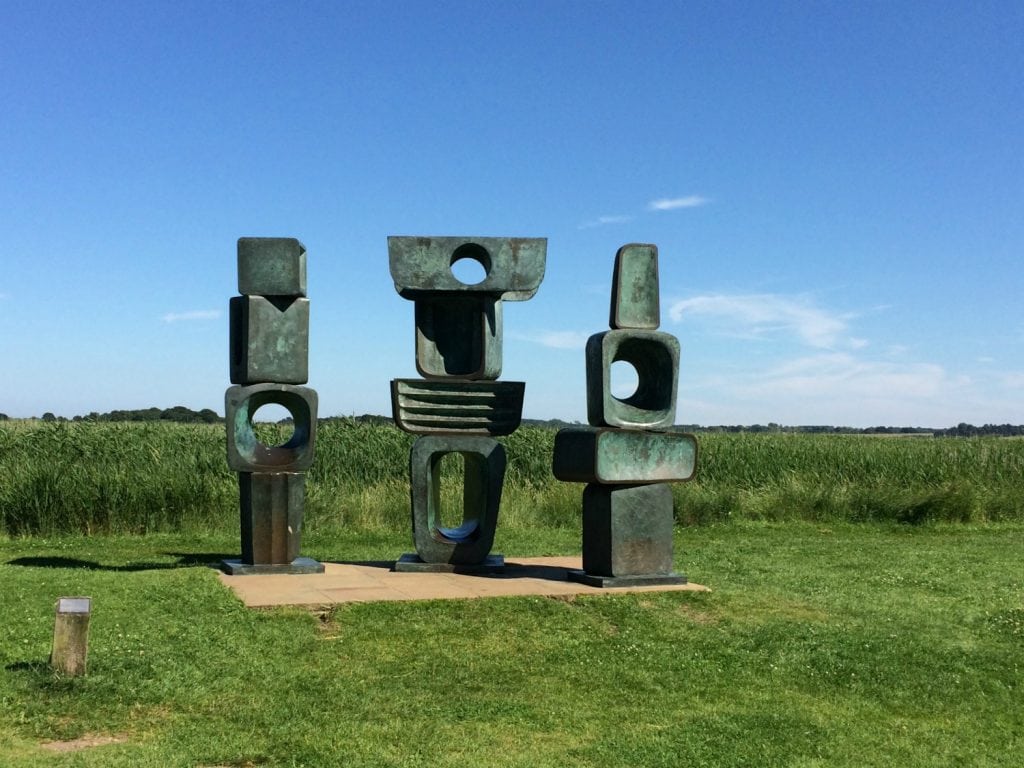 Finally, rather apt for such a hot, sultry day, we spied Henry Moore’s Reclining Figure basking in the sunshine along with two other reclining figures also enjoying some Suffolk warmth. 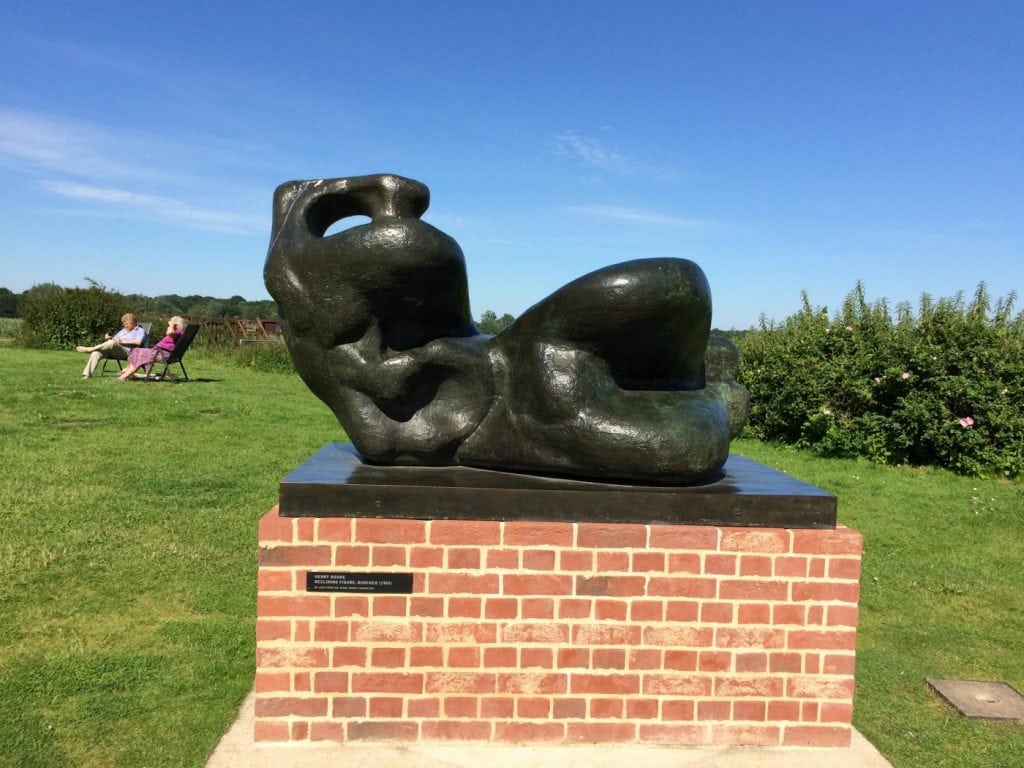