Home  >  Blog  >  Mum’s Gone To Sutton Hoo
Some months ago the National Trust launched a campaign to get children outdoors: ’50 Things to do before you’re 11 3/4.’ It included suggestions such as ‘No.7 Fly a kite’, ‘No.13 Make a mud slide’ and ‘No.44 Light a fire without matches’. My son is some years past 11 3/4 now but it was interesting to look at the list and see which ones he had actually completed. Abseiling? Check. Canoe down a river? Check? Get behind a waterfall? Check.
Number 12 on the list is ‘hunt for treasure on the beach’ and this came to mind when we visited Sutton Hoo, the National Trust property in Suffolk, home to an ancient Anglo-Saxon burial site. It might not be on a beach but it’s very close to the coast, on the estuary of the river Debden, and has certainly provided Britain with one of its most significant finds of buried treasure.
On the eve of the Second World War, archaeologist Basil Brown began excavating the large grassy mounds on the estate of landowner Mrs Edith Pretty. Although grave robbers had previously looted many artefacts from some of the mounds, Basil investigated some untouched graves and was successful in uncovering a ship burial of an Anglo-Saxon king accompanied by his treasured possessions. Mrs Pretty subsequently gave the treasure to the British Museum but replicas of the masks and artefacts remain at the original site, together with some genuine objects from later discoveries. 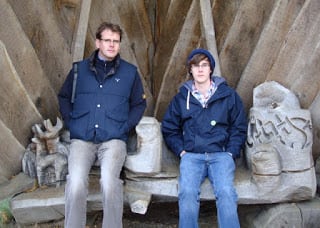 Sutton Hoo is a great choice for family days out as it provides something for people of all ages. With over 90 hectares of woodland to explore, striding out for a brisk walk to see the burial mounds, whilst kicking leaves and opening spiky chestnut husks, gets even indolent teenagers moving. There are two walks to choose from, the short one (one hour) and the long one (up to 2 hours 30 minutes). Guess which one we chose? Well, it was starting to rain and this was the beginning of November.
Cheeks suitably ruddy after our woodland walk, we quickened our step and headed for the warmth of the small Exhibition Hall which was informative without being stuffy. Children can try on typical Anglo Saxon clothes, peep inside a full size replica of a burial chamber and listen to taster talks by the cheerful, enthusiastic Sutton Hoo Society guides. Most people come here to see the famous mask and although it is only a replica, there is something quite arresting about it.
When the rain stopped, we headed back out again to have a look round Tranmer House which has been frozen in time in the 1930s to recreate Mrs Pretty’s home at the time of the excavations. What an unexpected pleasure! A truly ‘hands-on’ approach to visitors exists in the house: children and adults are free to sit on the furniture, listen to the gramophone, flick through magazines and play the piano. “Touching is positively encouraged,” so the warm and smiling guide informed me. She told me they would soon be decorating the house for Christmas and I thought that fact alone would be enough to tempt me back for another visit.
Back in the visitor reception we popped into the bright, airy cafe for a cuppa and a scone but took note of the imaginative children’s menu: a longboat baked potato in a sea of baked beans, anyone? I could have happily sat there for an hour or more, just looking out of the huge windows onto the river valley, but it was beginning to get dark and they would soon be closing for the day.
The National Trust has made sure that Sutton Hoo is accessible and interesting for families. You can pick up a family trail or a tracker pack, go wild in the adventure playground and zip-wire or become an archaeologist by having a dig around in the specially designed pit. There’s also a small second-hand bookshop, run by an enthusiastic member of staff, just one of several during the day who made us feel so very welcome.
“Do you think we can tick off ‘No. 12 Hunt for treasure on the beach’ after our visit to Sutton Hoo?” I asked my teenage son.
“I think it’s pushing it, Mum, but we did do ‘No.6 Run around in the rain.’ and we possibly did ‘No.28 Climb a huge hill’ if you omit the word ‘huge’.”
“Here’s one for you. How about you do ‘No. 27. Watch the sun wake up’ tomorrow morning?”
“After all this exercise and fresh air today? Not a chance!”
Sutton Hoo is in Woodbridge, Suffolk. Tickets are priced at £6.70 for adults and £3.40 for children. A family ticket is £17.10. However it is worth looking for MoneySupermarket Days Out discounts. They provided us with the family ticket to review this attraction, in association with Tots 100. 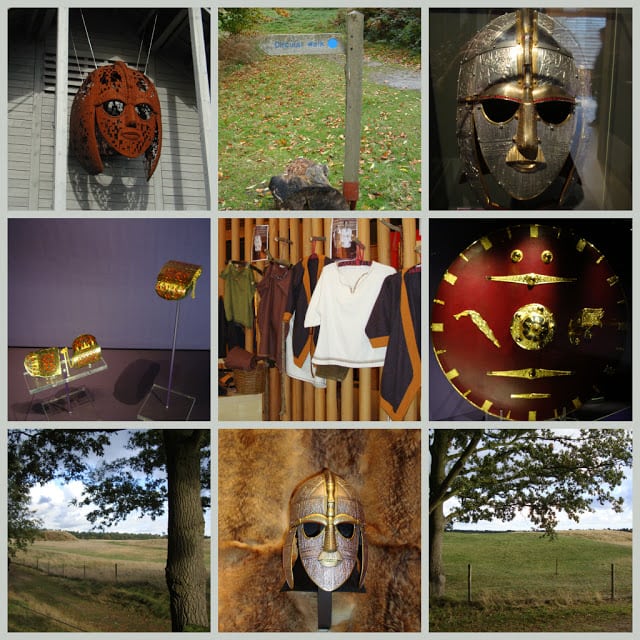